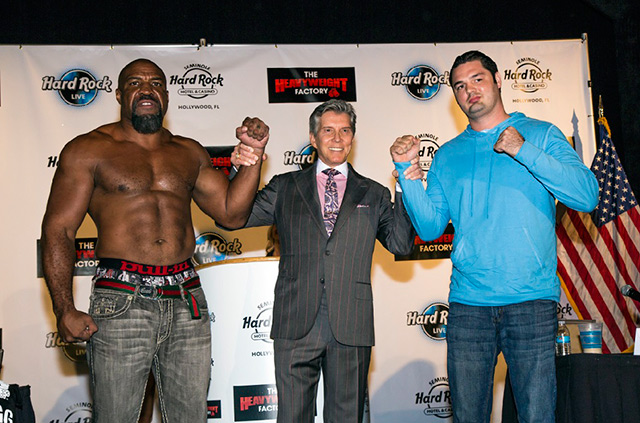 You have to admire Shannon Briggs.

Well, you don’t have to. You might think he’s a looney tune, at age 43 playing the jester and trying to lure heavyweight titan — and RING heavyweight champion – Wladimir Klitschko into a tussle and a payday. Not necessarily in order of import…

But c’mon.
The Brooklyner’s long game has to be applauded. For two-plus years, he’s been a mosquito at the fancy bash, showing up to needle Wlad while bellowing his catchphrase, “Let’s go champ!”
Check out the latest installment, in which he crashes a Klitschko gym sesh…
So I do wonder, will Briggs’ gambit ever pay off? I put this question to Team Klitschko exec Bernd Boente. Will we see Wlad against the combustible “Cannon”? And what’s his take on the taped hijinks? “It’s entertainment,” said Boente, who waits to see how Wlad handles a taller foe, Tyson Fury, shortly.
Ok, might these comedic bits result in a payoff? “I don’t see a business case to be made for (Wlad vs. Briggs),” Boente said.
But Briggs will be pleased to know, Bonte did NOT shut the door or a window to that tussle. Hey, this is boxing. Much stranger things have happened.
Follow Woodsy’s fancy bash on Twitter.