Tomoki Kameda: ‘Everyone will see a new, improved ‘Mexicanito’ this time’ 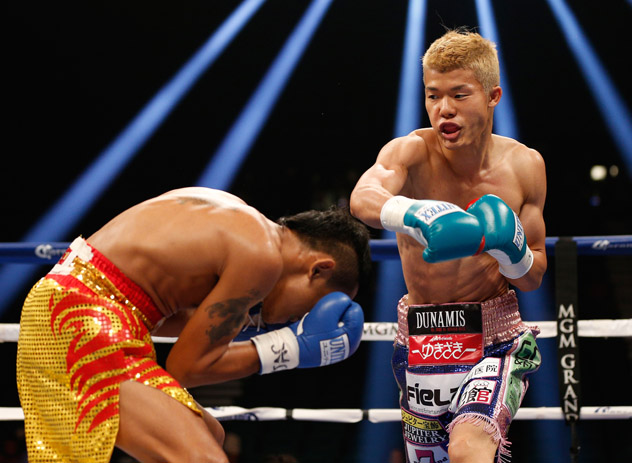 It was one of the closest fights so far in 2015. It’s not every day when you’ll see a title fight scored 114-113 across the board unanimously but that was the case when England’s Jamie McDonnell (26-2-1, 12 knockouts) and Japan’s Tomoki Kameda (31-1, 19 knockouts) met for the first time last May, in one of the most exciting battles of the year.

After such a performance, it wasn’t hard to guess that a rematch was in order and that’s what we’ll get Sunday, Sept. 6, when McDonnell and Kameda clash once again in another edition of Premier Boxing Champions (PBC), broadcast live on CBS (4 p.m. ET/1 p.m. PT) from the American Bank Center in Corpus Christi, Texas. The bout will support the Anthony Dirrell-Marco Antonio Rubio super middleweight main event.

“We’re working hard. We had a good preparation in Las Vegas along with [new trainer] Ismael Salas,” said Kameda in regard to living mostly in Mexico for the past six years with occasional visits to his native Japan. “Ismael has taught me a lot of new things and now we have our fight plan ready for the fight.”

As the fight grows in expectation and anticipation among fans and press alike, a win may eventually be the chance of turning this rivalry into a trilogy that would go a long way in determining the name of the best 118-pound fighter in the world today.

Kameda is confident that he is making the necessary adjustments to reach that point one day.

“Everyone will be able to see a new and improved ‘Mexicanito’ Kameda this time,” said Kameda, referring to his moniker (‘Little Mexican’). “We already had our preparation and I am sure I will be able to win it this time. Everybody will be surprised about my changes.”

However, Kameda’s rise to the top of the bantamweight rankings will feature a major roadblock somewhere along the way. Tomoki is currently ranked No. 6 by THE RING, while his brother Koki is ranked No. 4 in the same division and their phenomenal countryman, WBC titlist Shinsuke Yamanaka is at the very top of the order. But ever since leaving his country at the tender age of 17, Kameda has always found a way to find the right kind of inspiration necessary to succeed from his family.

“We’re very happy and grateful with Al Haymon for this opportunity and for giving us the chance to fight on the same night with Daiki,” said Kameda, referring to his older brother – completing the trio of boxing brothers – fighting on the undercard against Victor Ruiz in an eight-rounder. “We’re very excited and I feel we’re going to win, both of us.”

Haymon’s role in Kameda’s emergence as the most visible of the Kamedas in the US is not lost to Tomoki, who credits the controversial boxing mogul for his newly found success.

“Ever since I signed with him, he gave me a lot of good advice and got me into some good fights,” said Kameda about Haymon. “I like the fact that he got me to fight on open network TV and now I will be on TV again, so a lot of people will know me. This is very important for me.”

Originally training in Karate and other martial arts, Tomoki took up boxing at the behest of his father, Shiro, who was already training Koki and Daiki for worldwide contention. But things took a bad turn in 2007 when Shiro was suspended indefinitely by the rigorous Japanese Boxing Commission for advising Daiki to “fight dirty” in his bout against Daisuke Naito.

But although far away, Tomoki feels the support of his family, despite their absence sometimes taking its toll on him.

“I love that my family and my sponsors who support me from [Japan] and this motivates me as well,” said Tomoki, “but, in Las Vegas, I am able to focus 100 percent on my boxing skills because we practice in a private gym, away from everyone.”

His life in Mexico, where he has been welcomed warmly by fans and fellow boxers alike, also helps to bridge the emotional gap with his homeland and his roots.

“I’ve learned a lot of things in Mexico, not only about boxing but also about their culture as well,” said Tomoki. “Now I am visiting other parts of the US to learn more about the country as well. Mexico has been great to me and I am very grateful to all the people who have supported me. I am very happy and I hope they continue supporting me and I will give them my best effort, always.”

His immediate future after the victory he expects is not yet clear but the two countries he holds close to his heart will definitely be on his itinerary before he makes his way to Sin City.

“I believe I will continue my preparation in Las Vegas from now on but, after my fights, I like to go back to Japan and Mexico because there are a lot of fans and friends there waiting for me,” said Tomoki. “I want to fight to fight with the best. But, first, I need to win this fight and then we’ll talk with the other fighters.”