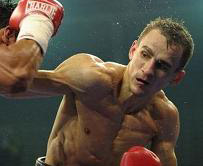 The winner of the fight will be the mandatory challenger for the winner of the WBO lightweight title bout between Terry Flanagan and Diego Magdaleno, which will take place on the same card.

“This is a great opportunity to fight in a WBO final eliminator,” said Petrov. “This brings me closer to a world title, which has been a lifelong dream of mine. It’s been a long road for me to get to this position, and I want to make my family and friends proud. I want to thank Artie Pelullo for believing in me and for getting me the chance, I won’t disappoint.

“Fighting Liam Walsh on his home turf will be tough but, at this point in my career, there is no cutting corners. Walsh is in my way, and I must beat him to achieve my goals. He is a young, strong fighter but has never seen anybody like me inside the ring.”

Banner Promotions President Artie Pelullo said, “This is another case of Boxcino being the springboard to a huge opportunity. Petr has earned this opportunity, and we believe that he will win this fight and fight the winner of the main event between Flanagan and Magdaleno.”