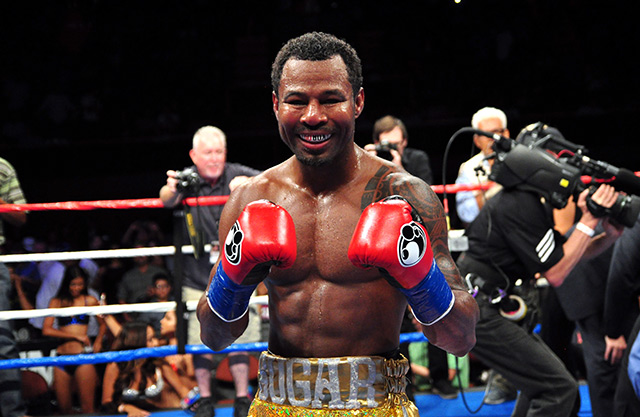 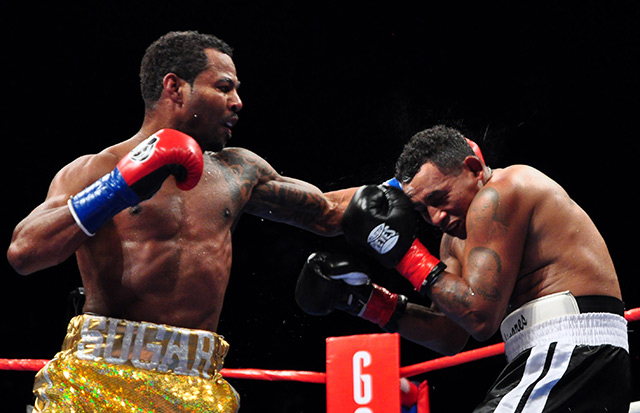 INGLEWOOD, Calif. – The Shane Mosley-Ricardo Mayorga rematch lasted half as long as their first fight but it was fun while it lasted.

Both former champs are way past their primes and neither is anywhere near as active or sharp as they were when they first fought in 2008, but Mosley proved he has more left than Mayorga by stopping the brash Nicaraguan veteran on a body shot at the end of Round 6 of their scheduled 10-round super middleweight bout.

And he did it in entertaining fashion. Mosley isn’t as quick or busy as he was 15 years ago, when he was undefeated and considered the best boxer, pound for pound, in the world, but he still possesses his passion for fighting and the Southern Californian can still crack.

“From the first round I knew it was going to end in a knockout,” Mosley told the press after the bout. “The way I was connecting, I knew I would get him. I thought one of those head shots would stop him, they were so easy to land, but the body shot proved to be the one.”

Mayorga (31-9-1, 25 KOs), God bless him, can still take a hell of a shot. The 41-year-old slugger somehow remained upright after absorbing at least a dozen flush, head-twisting right hands during the first four rounds of the bout (and yes, the crazy S.O.B willingly allowed Mosley to tag him with a few of them, driving the crowd into a blood-thirsty frenzy).

One of those right-hand bombs from Mosley reportedly split Mayorga’s mouthpiece in half during the second round, dislodging one of his teeth and loosening others. Ryan Burton, Mayorga’s spokesperson for this promotion, said Mayorga skipped the post-fight press conference to have his jaw examined.

But just when it seemed like Mayorga would get iced by one of Mosley’s head shots, the wild man raged back in Round 5 after being stunned by a left hook along the ropes. Mayorga taunted Mosley as he drove him back with overhand rights and wide sweeping hooks to the midsection. Mosley evaded most of the haymakers, but had to give ground to the Central American.

“Mayorga came to fight,” Mosely said. “He gave us a good show and didn’t go down from the first hard punches I landed. A lot of lesser fighters would have.”

Round 6 featured many heated exchanges that brought the fans to their feet. It was by far the best round for Mayorga, who appeared to rock Mosley with a few of his winging power shots.

“He staggered me a few times,” Mosley admitted. “I could feel the weight in his punches. He weighed in around 166 pounds but he was probably 180 pounds tonight.” 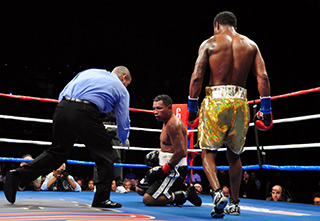 The back-and-forth nature of Round 6 led some on press row to think they would witness a distance fight, but with a few seconds to the bell Mosley landed one of the punches that made him star in the late 1990s – a left hook to the body (and perhaps a little below the belt) – which folded Mayorga for referee Raul Caiz Jr.’s 10 count.

So what’s next for Mosley?

The future Hall of Famer says he will probably fight a few more times before focusing on promoting (tonight’s show was put on by his GoBox company) fulltime.

Mosley, who weighed in at 159 pounds for Mayorga, said he could fight again as soon as November and that he would likely work his way back down to junior middleweight or welterweight.