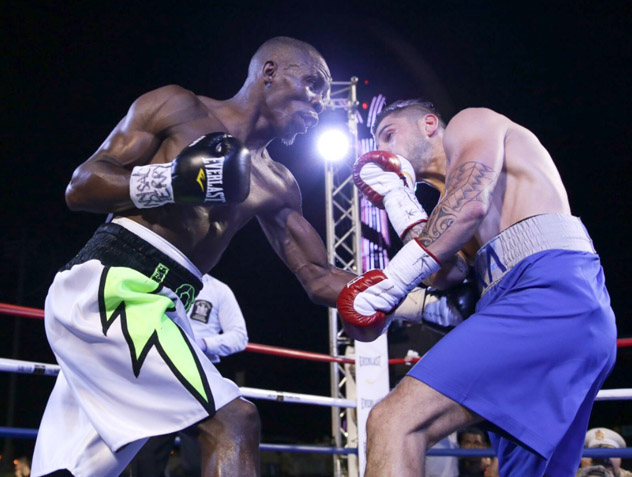 BROOKLYN, N.Y. – Promoter Dmitriy Salita brought his popular Brooklyn Brawl series and a cavalcade of Russian-speaking prospects to MCU Park in Coney Island, where a lively crowd of over 2,000 took in the first boxing card at the venue since Hector Camacho Jr. defeated Jesse James Leija in 2001.

In the main event on Tuesday night veteran featherweight Cornelius Lock (23-7-2, 15 knockouts) shocked former world-title challenger Alexander Miskirtchian by scoring two knockdowns in the third round en route to a stunning knockout victory. The second knockdown came on a straight left hand which hit the mark and sent Miskirtchian down with a large boom. Referee Steve Willis never even started the count. The official time was 2:10.

Miskirtchian (25-4-1, 9 KOs) came into the bout ranked No. 10 by the IBF, No. 13 by the WBC and is just two fights removed from losing a unanimous decision to Evgeny Gradovich last May in Macau.

After a fairly even opening round, Lock pressured Miskirtchian in the second, scoring the cleaner blows. While Miskirtchian was trying to get in position to land something meaningful, Lock would land a combination of his own to throw Miskirtchian off balance.

Miskirtchian came out of his corner to start the third round with redness around his eyes and nose. Lock stunned Miskirtchian with a solid left hook, which caused the first knockdown. Although Miskirtchian beat the count, he was not steady on his feet and left himself wide open moments later for the straight right which ended the bout.

Brooklyn’s Dimash Niyazov, whose day job is protecting the streets of New York City as a member of the NYPD, scored an impressive six-round, unanimous-decision victory over Ariel Duran (8-8-1, 5 KOs). The official scores were 58-55, 58-55, 59-54. 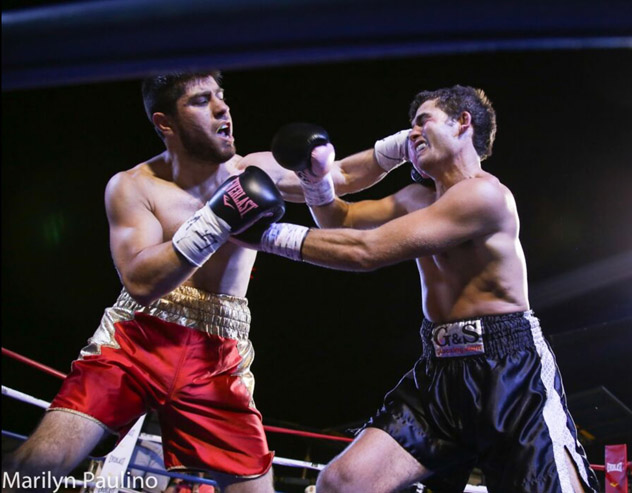 Niyazov (8-0-3, 5 KOs), originally from Kazakhstan, controlled much of the action with his hand speed and scored a fifth-round knockdown with a quick jab-right combination.

Undefeated Gary Beriguette (7-0, 4 KOs) gave a clinic on how to fight on the inside by defeating the much taller Anton Williamson (1-5) with a four-round, unanimous-decision victory. The official scores were 39-36 across the board. Beriguette broke down his opponent with bruising body shots until Williamson simply ran out of gas and held on for the remainder of the bout.

Two-time Irish Olympian and 2012 Silver medalist John Joe Nevin (4-0, 3 KOs) scored a third-round TKO victory over Mexican Victor Capaceta (4-8, 2 KOs) in a junior welterweight bout. The official time was 3:00 of Round 3 as Capaceta was unable to answer the bell for the fourth round.

Nevin belted Capaceta in the third round with a roundhouse hook that caught the back of his head. Capaceta went down hard and the referee gave him five minutes to recover, which he did. Knowing he was well behind on points, Capaceta’s corner stopped the fight before the fourth round could begin.

Welterweight prospect Treysean Wiggins (7-1 6 KOs) continued to impress with a third-round knockout victory over an awkward Kevin Womack Jr. (7-8, 5 KOs). The official time was 1:12. Womack tried to confuse Wiggins by switching stances several times in the short bout, but the southpaw Wiggins remained calm and cut the ring off until he was able to drop Womack.

Knockout artist Bakhtiyar Eyubov improved his streak to 8-0 (8 KOs) by stopping Cory Vom Baur (2-4) in the second round. The official time of the stoppage was 1:08.

Eyubov, who originally hails from Kazakhstan but now makes his home in Brooklyn, came out swinging like a bull, throwing looping hooks with both hands. He scored an early first-round knockdown but somehow Vom Baur got back up looking for more. Eyubov’s power was too much to take and ultimately Vom Baur’s corner was forced to stop the fight and save their man from more punishment. 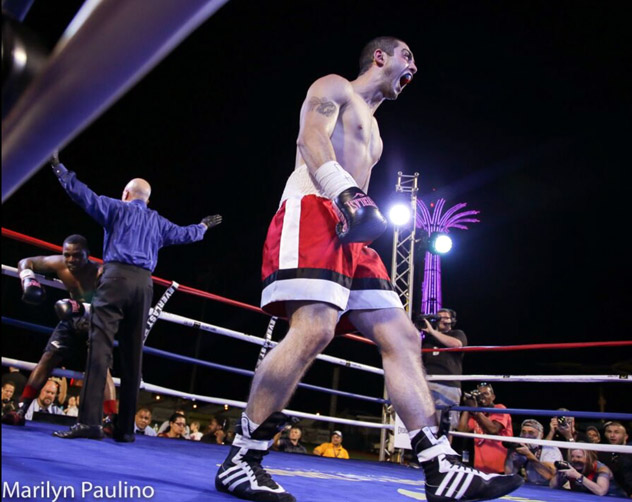 Giorgi Gelashvili put on one of the most exciting performances of the evening by throwing almost 20 unanswered punches in a barrage that stopped DeLoren Gray-Jordan (0-2) at 1:18 of the second round.

Gelashvili (2-0, 2 KOs) was so excited after dominating the first round that he ran out of his corner to begin the second without a mouthpiece on. He overwhelmed Gray-Jordan with a flurry of hooks and uppercuts. The crowd, pleading with the referee to stop the bout, cheered wildly when the fight was finally called off.

Chicago’s Junior Wright (14-1, 11 KOs) defeated Harvey Jolly (14-23, 7 KOs) by a six-round, unanimous-decision victory to win his first bout since being stopped in Moscow by Rakhim Chakhkiev back in May. Although Wright almost backed out of the fight with an injury to his left elbow, he decided to put off surgery to get back in the win column and erase the bad taste of a loss.

Wright didn’t look 100 percent comfortable but still dominated the bout with a steady stream of left hooks, for which Jolly had no answer. Wright knocked Jolly down in the last round but ran out of time while in search of the knockout.