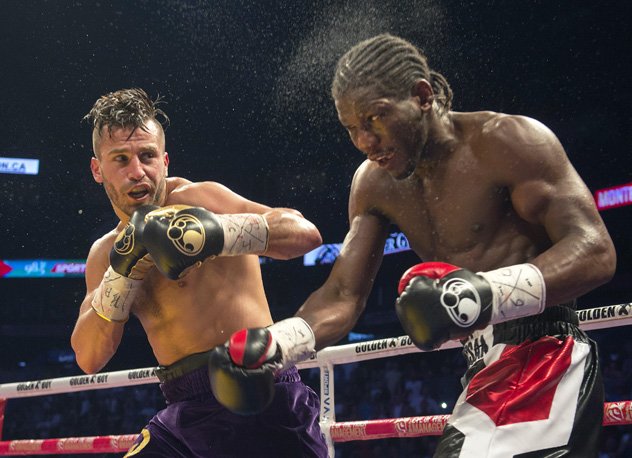 David Lemieux (L) catches Hassan N’Dam with a left hook during their fight in June 2015. Lemieux scored four knockdowns on his way to a unanimous-decision victory. Photo by Peter McCabe/AFP-Getty Images.

NEW YORK – David Lemieux appeared none-too-intimidated as he stood opposite the sport’s most feared knockout puncher on Tuesday at the Chase Square of Madison Square Garden.

Lemieux, with his blazer and immaculately quaffed mohawk, looked more like a movie star than a boxing star when juxtaposed with the polo-wearing WBA middleweight titleholder, Gennady Golovkin.

But his words carried the force of a fighter as he promised to bring Golovkin’s undefeated run to an end when they meet Oct. 17 on HBO Pay-Per-View.

Lemieux won the IBF middleweight title by unanimous decision in his last fight, knocking down Hassan N’Dam four times in June. His first move after winning the belt was to seek out the most intimidating fighter in his division.

Wearing his audacity like the tie his outfit was missing, he soaked in the atmosphere.

“Whoever thought a small kid like me, smoking cigarettes at 9, 10 years old, would one day fill up the Madison Square Garden?,” said Lemieux (34-2, 31 knockouts), who will headline at the Mecca of Boxing in two months’ time. “I’ve come a long way to be where I am.”

He describes himself as a “realist” who has had to work harder than the next guy to get to where he wants to be. His experience of overcoming odds in life is in line with New York’s defining anthem: “If I can make it there, I’ll make it anywhere.”

Though the pay-per-view middleweight unification bout has been approached as an all-action coronation party for Gennady Golovkin, the oft-avoided Kazakhstani who carries a Mike Tyson-like mystique, Lemieux views this fight as the night his star rises over Joe Louis Plaza. 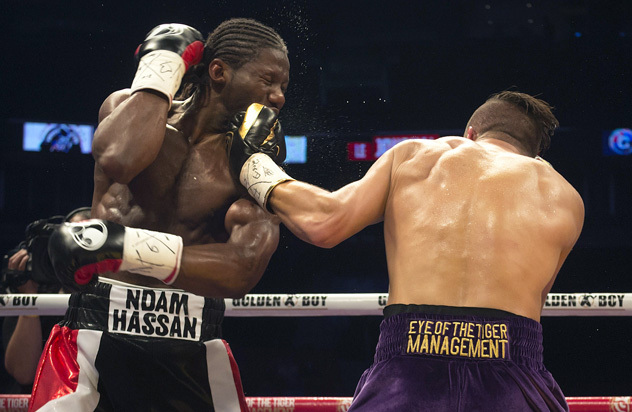 “What more can a fighter ask? I won a world title and I got the biggest opponent in my division right away. It shows also my character. I’m ready to face anybody, I’m not afraid,” said Lemieux.

“My last opponent, (Golovkin) didn’t want to face him. It landed on me, and I destroyed him. It’s going to be a similar outcome in this fight. There’s gonna be a lot of changes in a lot of people’s eyes.”

Lemieux admits he was a juvenile delinquent growing up. Having been kicked out of school for street fighting, he just as often arrived at home in the back of a police car as a yellow bus.

Lemieux’s trouble in the streets caught the attention of a neighbor who was a boxer. He brought Lemieux to the gym in hopes of channeling his anger somewhere it could be accepted as constructive and positive.

“I came in, I wanted to fight everybody. I got thrown out. I kept coming and fell in love with the gym,” Lemieux explains.

The sport gave him discipline, a sense of belonging and provided a meritocracy where one could rise up in the world through the power of their fists.

“I’m not a big dreamer, I’m a realist. I work hard for what I do,” said Lemieux.

He says he himself decided to make positive changes in his life – boxing was only part of it – but found it difficult to project what his life would be like today had his neighbor not intervened.

“I don’t know, I can’t answer that question. I would’ve been nowhere close to where I am today,” said Lemieux.

He was able to curb his aggression enough to win three Canadian national titles under trainer Russ Anber before turning pro at age 17. He won his first 25 fights – including 24 by knockout – while earning a reputation as a fearsome puncher with early knockouts of faded contenders Elvin Ayala, Hector Camacho Jr. and Walid Smichet.

That image was punctured in 2011 when he was stopped in seven rounds by Marco Antonio Rubio. He reevaluated his team and switched trainers to former Canadian national team coach Marc Ramsay and enlisted the services of manager Camille Estephan of Eye of the Tiger Management.

Before the year was over, Lemieux lost again, this time to former WBA junior middleweight titleholder Joachim Alcine by majority decision. Lemieux was still just 22, but his career was already in serious need of an image overhaul.

“He was a little bit between being a teenager and being a man. He wasn’t completely mature physically, and I know that time is running in my favor,” said Ramsay. 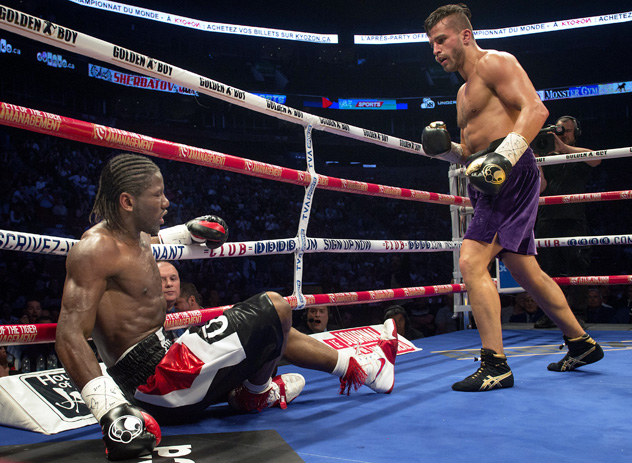 “Now he’s 26, he’s not in the same situation at all,” says Ramsay. “He’s a man physically, he’s a lot more stronger than he was and that period also gave me time to work on some specific stuff technically to make sure he’s able. Bringing power to the ring is one thing, but when you fight at that level you need to be a little more.”

In Golovkin, Lemieux faces a fighter whose reputation has been built as much on the names of fighters who have been hesitant to step in the ring with him as on the backs of fighters whom he has laid on the canvas.

Golovkin, who was unable to coax current RING middleweight champion Miguel Cotto or his predecessor, Sergio Martinez, into the ring, has knocked out his last 20 opponents. Between Lemieux and Golovkin’s 69 combined fights, only seven have gone to the scorecards.

“It could go the distance, but I doubt it. It will not go the distance. There is going to be a lot of blood in this fight. There will be knockouts,” said Lemieux.

Golovkin’s aura has grown to near-immortal classification, an observation not lost on Golden Boy Promotions East Coast president Bernard Hopkins, who holds the record for most middleweight title defenses at 20.

Hopkins says he was in the same position when he fought Felix Trinidad in 2001, which was also a middleweight title unification bout at the Garden. He says the sight of Golovkin presenting a robe to an MSG exec gave him a flashback.

“I was in the same position that Lemieux was in. Nobody’s really giving him a shot, they’re giving him a good scrap, maybe four to five to one underdog,” said Hopkins, who stopped the previously unbeaten Trinidad in 12 rounds and effectively halted his career.

“They were giving Trinidad all these gifts. I told Lemieux about the history of how this thing right now is coming full circle.”

Ramsay has been around Golovkin since he was a teenaged amateur, witnessing him beating and losing to notable fighters along the way. He knows that Golovkin, though talented and dangerous every step of the way, bleeds red just like Lemieux does.

“Nobody is unbeatable. Golovkin is a human being, he’s not a god,” said Ramsay.

“I know he’s a big challenge but I know he’s not a god, he’s a man. There’s a way to beat every fighter. It’s just a question of time usually.”