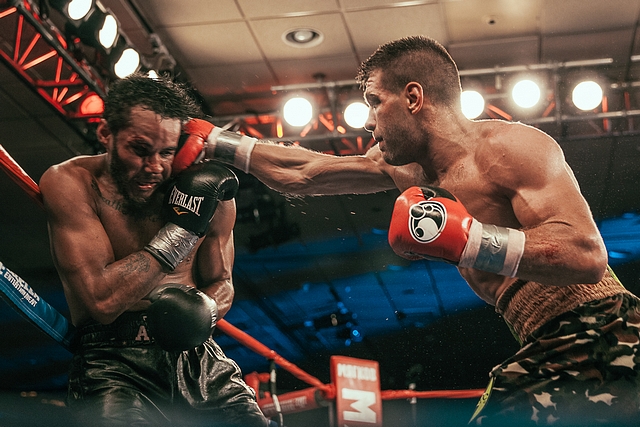 Friday, Aug. 7 (continued): In part one, I marveled at how life tends to run in circles and, if one digs a bit, tonight’s ShoBox tripleheader proved that truism.

In conducting my pre-fight research for Prograis-Cowart, I was particularly impressed with the in-and-out movement, sharp combinations and power left crosses Prograis displayed during his victories over Miguel Alvarez (TKO 3) and Marteze Logan (TKO 2). The Alvarez stoppage saw Prograis average 95 punches and 40 connects per round but, as impressive as those figures were, he somehow managed to top them against Cowart, a far superior opponent in terms of record (11-0-1) than the 10-11-1 Alvarez.

Prograis, a Houston-based native of New Orleans, took the fight to the rugged and willing Cowart from the start, thanks to a pair of sharp, powerful left crosses. From then on, Prograis peppered his fellow southpaw with lightning-quick combinations that eventually took their toll on Cowart’s face. Through it all, however, Cowart remained steadfast and, at times, he managed to stall Prograis’ attack with counter lefts and a healthy body attack. He also landed enough punches to create several bruises on Prograis’ face. While Prograis won virtually every round, Cowart’s strong competitive drive helped make this lopsided win entertaining from first bell to last.

Statistically speaking, Prograis’ performance was stunning. In just eight rounds, he landed 381 punches – the 18th highest connect total ever recorded by CompuBox in a junior welterweight fight. He averaged an astounding 113.6 punches per round that included 67.9 jabs and 45.8 power punches, dwarfing the divisional averages of 59.9, 24.7 and 35.2. His connect averages were even more impressive as he landed 47.6 punches and 27.4 power punches per round (nearly triple the divisional norm), as well as 20.2 jabs per round, nearly quadruple the 140-pound average.

As impressive as Prograis was, he couldn’t have shined as brightly without the doggedly determined Cowart, who soaked up everything and fired back whenever the opportunity arose. Prograis rightly won, 80-72 on two cards and 79-71 on the other, but Cowart deserves credit – and perhaps another crack on ShoBox’s air – based on his willingness to engage even in the midst of a world-class offensive attack.

As for Prograis, I can’t wait to see him fight again. As a longtime boxing observer, I appreciate his offensive variety and the speed with which he delivers it. As a punch-counter, his hyperactive work rate is a pleasure to track because it tightens my focus even more and allows me to achieve an optimal rhythm. Only time will tell how high Prograis will rise but he couldn’t have created a better first impression in his initial televised fight.

While Prograis progressed and Cowart proved he was no coward, Khytrov was asked to display a trait he had not yet exhibited in his brief pro career – the ability to bounce back from early adversity. “The Ukrainian Lion” devoured his first seven opponents with an overwhelming, two-fisted attack and his eighth round TKO over Jorge Melendez showed he could sustain his effectiveness over the long haul. In his most recent outing against Aaron Coley, he showed he can throttle up his attack in the late stages as he surged from 65.3 punches per round in the first four to 85.3 in the final four in notching his first decision victory as a pro.

As consistent as Khytrov has been so far, that’s how unpredictable Brinson had been in terms of pacing. He started strongly against Jason Escalera in their May 2012 bout as he landed 57%, 61% and 78% of his power shots during rounds three through five but by round seven, he was exhausted. In that round, Escalera produced a stunning rally that saw him land 43 of his 102 punches, while Brinson was a mere seven of 32 and while Brinson recovered enough to have a decent eighth, he walked out of the ring with a draw that looked like a sure win a short time before. Two years later, against Dominic Wade, however, Brinson started slowly (33.8 punches per round in the first four), then cranked up late (57.2 in the last six, including a fight-high 73 punches in the final round) to close what had been a wide, early gap.

Given Khytrov’s reputation for high-octane action, it was shocking to see him sticking-and-moving for the entire first round, one that saw him throw just 25 punches, all of which were jabs. Brinson took advantage by throwing 42 punches and out-landing Khytrov 7-4, including six of 30 jabs.

That all changed in round six when Khytrov (pronounced HEE-trov) finally began bringing the heat. In that round, he fired 77 punches and landed 23, including 18 of 44 power shots. While Brinson fared well statistically (20 of 63 overall, 10 of 29 jabs), it was clear that his gas tank was dangerously low. Sensing that, Khytrov swarmed Brinson in the seventh and eighth rounds, throwing 184 punches and landing 86 to score a TKO with 29 seconds remaining in the contest.

For Khytrov, the final result was a product of patience as well as an ability to cope with an in-fight injury.

“I tried to warm up the first few rounds but I thought his condition would decrease more,” Khytrov told RingTV’s Joe Santoliquito. “I saw his fights and waited for his punch [output] to slow down. I just waited for him to slow down. It was a difficult fight for me because I felt this pain in my side before the fight. Each time he touched my body, there was this pain over here on my side. I learned before next fight and I pulled through.”

Khytrov’s surge allowed him to secure connect leads of 164-130 overall and 108-64 power, while Brinson retained his lead in jab connects (66-56). In defeat, however, Brinson showed that Khytrov is vulnerable to intelligent mobility and, at times, his tactics drove the Ukrainian to bursts of frustration. To his credit, Khytrov regained his ring identity just in time to quell the threat but future opponents will take note of how well Brinson’s mobility and angles worked. The final piece of the blueprint will be having the necessary stamina to maintain them for an entire contest.

Like Khytrov, countryman Sergiy Derevyanchenko is someone who is in a hurry to achieve world honors and if he continues to produce as he did against Ayala, he may get his chance sooner rather than later. The Ukrainian already has had a stellar amateur career as well as a successful run in the World Series of Boxing (in which he won 24 of his 25 bouts), thanks to his thoughtful yet powerful style.

Derevyancheko used the first round to assess the challenges Ayala’s movement and busy jab presented and, for the most part, he was successful as he out-jabbed the jabber (12 of 34, 35% to Ayala’s six of 44, 14%), then kicked his attack into high gear for the remainder of the contest as he averaged 83 punches per round to Ayala’s 63 and out-landed him 257-71 overall, 80-26 jabs and 177-45 power. His outstanding balance allowed Derevyanchenko to sustain his combinations and his combination of impact, accuracy (44% overall, 37% jabs, 49% power) and steady body-punching (82 of his 277 connects struck the flanks) markedly slowed the 34-year-old veteran. But for all his assets, I was most impressed with the effectiveness of Derevyanchenko’s jab, whose 11.5 connects per round more than doubled the 5.2 middleweight average and also served to neutralize Ayala’s biggest weapon (36.8 thrown/4 connects per round and 11% accuracy).

Although Ayala absorbed sustained punishment, he continued to fire punches at a high rate (63.2 per round) and he appeared to be fully engaged, not an easy thing to achieve when one is eating so much leather. In all, Derevyanchenko landed 277 punches to Ayala’s 81 and led 92-32 in jab connects and 185-49 in landed power punches. Those gaps appropriately resulted in lopsided scores from the judges (80-71 by Barbara and Tony Perez to complement Kason Cheeks’ 80-72 card).

The resourceful Ayala showed that future opponents may be able to survive Derevyanchenko’s punishment without being stopped for many rounds. That said, the frequency, accuracy and relentlessness of his attack will make life hard for just about anyone who stands across the ring from him.

Andy had planned to wait until the following morning to begin his six-hour drive home to Andover, Mass. but because he felt so fresh after the show – and because the traffic issues that slowed him likely wouldn’t be there during this very late hour – he decided to start right after the show. After we said our goodbyes, I grabbed a couple of thin slices of pizza, stuffed a can of Diet Pepsi in my pants pocket and returned to my room to pound out a few paragraphs before turning in shortly after 2 a.m.

Saturday, Aug. 8: After five hours of mostly satisfying slumber, I got ready for the day, then spent the next few hours getting as much writing done before meeting carpool partner/”Elvis” operator Dave Raynak, in the hotel lobby at 10:30 a.m. A little after 10, however, I turned on my cell phone and got a voice message from Dave asking me to call him. He didn’t state the reason and I wasn’t sure when he placed the call. I didn’t sense any urgency in his voice but I still decided to expedite the packing process.

I sent him a text stating that I had checked out and was waiting for him at our agreed-upon meeting place, the hotel lobby. Dave arrived a few minutes later, after which he told me the reason for his call: He had received word that an accident had occurred on the Atlantic City Expressway and it was bad enough to cause a significant delay. But when he looked at his phone again, it appeared that progress had been made and that we should be able to arrive in Philadelphia well before our respective 1:55 p.m. departures. That’s exactly what happened.

Dave and I got a kick out of the enthusiasm our shuttle bus driver showed, for it was clear that he loved his job. As people who love our jobs, we related.

My seatmate on this flight was a pilot, so I took the opportunity to ask him about how he sees turbulence.

“It’s uncomfortable, of course, but it’s very rare that it will cause airplanes to break apart,” he said. “Sure, you can try to do it by flying directly into thunderstorms but, when we know it is coming, we try to negotiate a different altitude or a path to fly around it. These planes are built tough.”

That reassurance made it much easier to bear the shaking we experienced on ascent and descent but, once again, we touched down right on schedule.

The drive home was devoid of traffic issues and I pulled into the driveway at 5:45. But my day wasn’t nearly done, for I had plenty of work related to CompuBox’s fantasy game – “Throwdown Fantasy” – to tackle. That included compiling counts on all three bouts on the HBO Latino telecast – Tevin Farmer’s eighth round KO of Daulis Prescott (brother of Breidis), Manuel Avila’s fifth round TKO over Yoandris Salinas and Dmitry Mikhaylenko’s savage, eighth round TKO of Johan Perez.

As of this writing, I don’t know when my next trip will be. One thing is certain: I’ll have more than enough boxing-related tasks to keep me engaged. And I’ll love every minute of it.

Until next time, happy trails!

Lee Groves is a boxing writer and historian based in Friendly, W.Va. He is a full member of the BWAA, from which he has won 13 writing awards, including 10 in the last five years and two first-place awards since 2011. He has been an elector for the International Boxing Hall of Fame since 2001 and is also a writer, researcher and punch-counter for CompuBox, Inc. He is the author of “Tales from the Vault: A Celebration of 100 Boxing Closet Classics. To order, please visit Amazon.com or email the author at [email protected] to arrange for autographed copies.