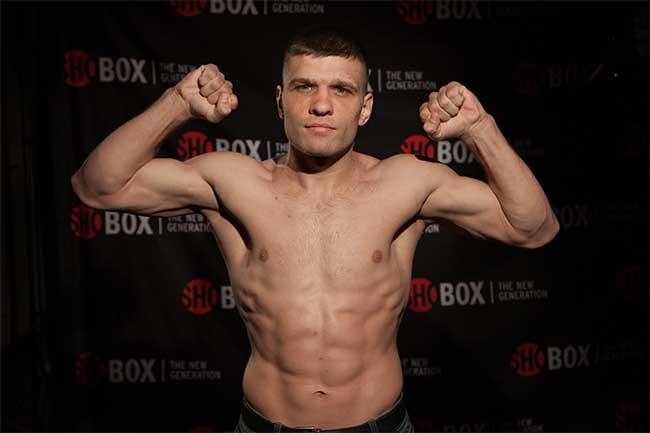 Age: 29
Hometown: Feodosia, Crimea, Ukraine
Weight class: Middleweight
Height / reach: 5-foot-8 (175 cm)/ 69 inches (174 cm)
Amateur record: 390-20
Turned pro: 2014
Pro record: 5-0, 4 knockouts
Trainer: Andre Rozier and Gary Stark Sr.
Manager: Al Haymon
Promoter: Fight Promotions, Inc. and DiBella Entertainment
Best night of pro career: Derevyanchenko considers his April TKO win over Alan Campa (13-2, 9 KOs) as his best pro outing.
“The last one, when I was the opener on ‘ShoBox,'” Derevyanchenko told RingTV.com through Max Alperovich of Fight Promotions, his co-promoter. “I trained extremely hard for that fight. It paid off. I was able to get all the combinations off. The opposition was finally increased and I thought it was a very successful fight.”
Worst night of pro career: So far he’s had things go his way, easily beating all five opponents to date and is happy with all his fights at this point.

Alperovich believes it took his fighter a little time to acclimate to the pros: “His nickname is ‘The Technician.’ He likes to study his opponents and probably, the first two fights when he started in the pro ranks, it took a little bit for him to get comfortable. From that point on, everything started increasing in terms of his performance.”

Next fight: Derevyanchenko steps up to 10 rounds for the first time when he faces experienced former title challenger Elvin Ayala on Friday at Bally’s, Atlantic City, NJ. in the main event on “ShoBox: The New Generation.”

“Ayala is an experienced and proven contender and, without a doubt, my toughest opponent to date,” Derevyanchenko said. “That being said, there is no doubt in my mind that I will come out victorious from this battle.”

Ayala, 34, enters the bout with a record of 28-6-1 with 12 stoppages. He is coming off back-to-back upset wins this year over Aaron Mitchell and, most recently, Ronald Gavril. He previously held former junior middleweight titlist Sergio Mora to a draw in 2007.

Why he’s a prospect: Derevyanchenko enjoyed a glittering amateur career. Winning gold as a cadet in 2001 and 2002 at the European Championships. He represented Ukraine at the 2008 Olympics – losing to the eventual silver medalist, Emilio Correa Jr. His biggest amateur achievement was winning bronze at the 2007 World Championships.

He later competed in the World Series of Boxing, in which he excelled, going a very impressive 23-1.

He says of his reason to make the transition from WSB into the pros, “I was the individual champion twice. I won the team championship and felt there was no more growth.”
During his time in the amateur ranks, he met many top fighters, including former WBO junior middleweight titlist Zaurbek Baysangurov, WBO middleweight title challenger Matt Korobov and 2008 Olympic champion Correa.

Derevyanchenko finely tuned his skills in the amateurs in his considerable amateur career. He understandably feels he has many attributes inside the ring.

“I’m a technician; my ring generalship, I’m a master boxer,” he said. “I always feel I have the upper hand on that. I can adjust my boxing and fight short-range, mid-range, long-range, wherever I need to be.”

Why he’s a suspect: It’s still early in Derevyanchenko’s pro career. At this point, he’s yet to show a particular weakness.

Alperovich feels one key component will aid his fighter’s elevation in the talented middleweight division: “The more experience he gets, the more confidence he gets and he can showcase that.”
How far does Derevyanchenko feel he is from the top fighters in his weight class?
“I’ll probably take me a year, at least, ” the 29-year-old said. “It doesn’t really depend on time; it depends on the number of fights. I progress every fight and gain experience.”
At 5-foot-8, Derevyanchenko isn’t the biggest middleweight in the world but doesn’t plan on dropping down to 154 pounds. As an amateur, he fought at the middleweight limit of 165 pounds. He walks around at 170-plus pounds.
Also worth noting is he made his debut at 28 years old. It’ll be interesting to see if, after over 400 amateur bouts, he has left his best years there.
Story lines: His father was a boxer and took Sergiy to the gym for the first time when he was 10 years old.
He trained with his father in his hometown of Feodosia until 2001, when he moved to another city and changed trainers. He stayed with his amateur coach until he made the transition to the pros.
Derevyanchenko moved to New York last year with his wife and 5-year-old son and lives in a Russian/Ukrainian neighborhood. Initially it took time but now he is settled in.
“I feel at home, New York is my second home,” he said.
Fight-by-Fight Record