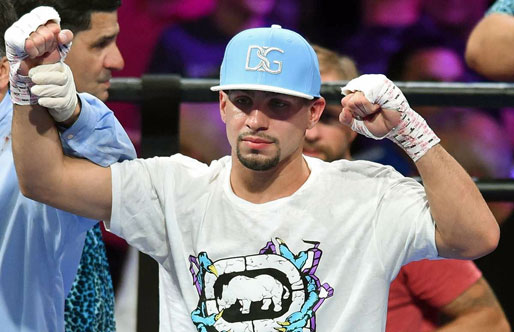 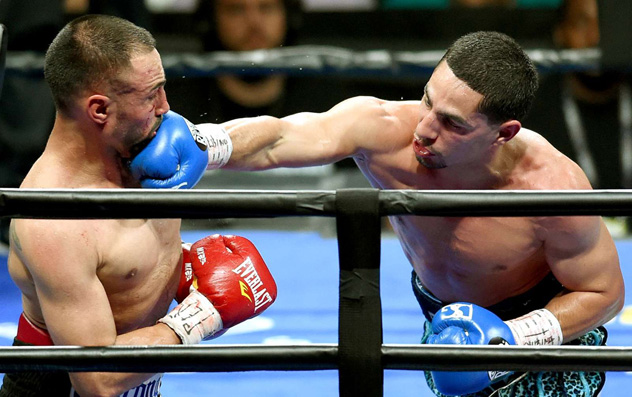 Danny Garcia: Somewhere along the line Garcia became a seasoned veteran. The hard-punching Philadelphian didn’t look sensational against Paulie Malignaggi on Saturday in Brooklyn, New York, where he scored a ninth-round technical knockout in his first fight as a full-fledged welterweight. He didn’t land one of his eye-catching punches that turns the lights out on his opponent and thrills the fans. In fact, not one of his power punches was memorable. And, for the record, he didn’t land many punches at all overall. Garcia did his job in a blue-collar way, patiently but methodically breaking down a weaker opponent until he could no longer fight. Spectacular? No. Thorough? Yes. I don’t know whether Garcia made much of a statement. I waited for that big punch or two that would turn a good performance into something more special. It never came. He looked better than he did in shaky performances against Mauricio Herrera and Lamont Peterson but that has as much to do with Malignaggi’s limitations than anything else. I guess the one thing Garcia (31-0, 18 knockouts) made clear is that he’s strong and comfortable at 147 pounds after fighting his entire career at a few pounds below. That makes him a threat to any 147-pounder south of Floyd Mayweather Jr. 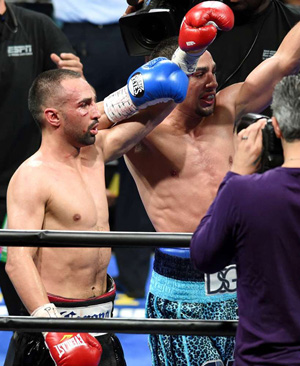 MOST DIFFICULT TO WATCH

Paul Malignaggi: Malignaggi (33-7, 7 KOs) said in a touching interview immediately after the fight that if he didn’t give what he called a “big performance” against Garcia, he’d walk away from the sport. Well, that’s that. It’s sad to see Malignaggi go. He should’ve been a relatively boring fighter because of his slick, albeit awkward style and lack of power but he wasn’t. His big personality and willingness to fight anyone, anytime made him a fan favorite. And I’m not sure he gets enough credit for his ability and accomplishments. He won a world title – the IBF junior welterweight belt when he nearly shut out Lovemore Ndou in 2007 – and was a contender for a decade even though he had horribly brittle hands and limited power, which undoubtedly had something to do with the hands. I often wonder how good he would’ve been if he could punch like, say, Garcia. And consider his courage. Imagine you go into a military battle with a small handgun. That would take guts. And that’s essentially what Malignaggi, with his lack of punching power, did his entire career. He relied on his athleticism and guile against some of the most fearsome fighters on the planet. And, when things went south, he never gave up. He would’ve fought until he dropped against Garcia had Arthur Mercante not stepped in to help him. Malignaggi was a real fighter. The good news is that he’s an even better commentator. So we’re stuck with him for the next 20, 30 years.

Luke Campbell: I don’t think it will be long before Olympic champion Luke Campbell of the U.K. becomes a professional world champion. The left-handed lightweight had to work hard to beat fellow Hull product Tommy Coyle but destroyed him in the end, putting him down once in the second and three more times in the 10th. The referee finally stepped in to save the brave Coyle (21-3, 10 KOs) in that round before an estimated 14,000 at Craven Park Stadium in Hull. Campbell (12-0, 10 KOs) is a complete fighter, as his pedigree suggests, but it was his devastating body blows – which played a role in all four knockdowns – that stood out to me on Saturday. Those shots, if he continues to through them with such regularity and purpose, are going to hurt and wear down a lot of quality opponents before he’s finished. I don’t want to jump the gun and say that Campbell is ready for anyone. A victory over Coyle, his biggest test, doesn’t prove that much. I will say that the gold medalist doesn’t fight like someone with 12 pro fights; his poise, ring acumen and polish suggest a higher level of experience. He’s almost ready. After the fight, Coyle, whose own dreams were dashed, called Campbell a “special talent.” That would appear to be the case.

The Danny Jacobs-Sergio Mora fight on the Garcia-Malignaggi card seemed to be a thriller-in-the-making when it came to a sudden and strange end. The fighters put each other down in a dramatic first round, which seemed to portend a good fight. Then, in the second, Mora (28-4-2, 9 KOs) collapsed under a barrage of punches and injured his ankle so badly that he couldn’t continue. Jacobs (30-1, 27 KOs) was awarded a TKO victory but didn’t prove much. ÔÇª Jacobs is one of the nicest guys in boxing but I was disappointed by his post-fight comments. He won the fight primarily because his opponent ran into bad luck, not because he was so good. He should’ve acknowledged that instead of acting like he just scored a meaningful knockout. ÔÇª Mora tweeted a few hours after the fight that he had fractured his ankle: “X-rays show I was TKO’d by avulsion fracture on my right ankle and NOT by @DanielJacobsTKO #Rematch.” ÔÇª The best punch on the TV portion of the Garcia-Malignaggi card was delivered by Puerto Rican junior middleweight prospect Prichard Colon (15-0, 12 KOs), who hurt Michael Finney (12-4-1, 10 KOs) with a right to the head and then put him away. Nice statement on national television. ÔÇª Jhonny Gonzalez bounced back from his knockout loss against Gary Russell Jr. in March, stopping Kazuki Hashimoto in the second round Saturday in Mexico. It was the former 126-pound titleholder’s first fight at 130 pounds. ÔÇª Heavyweight prospect Joseph Parker (15-0, 13 KOs) stopped Bowie Tupou (25-4, 17 KOs) in 63 seconds Saturday in New Zealand. It’s way too early to get excited about the big (6-foot-4, 237 pounds) Kiwi but some believe he could evolve into a factor in the division.