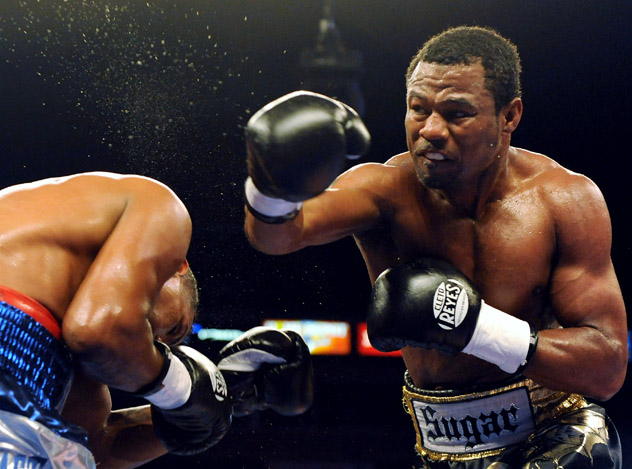 He’s 43 and – bless his busy body – one of the hardest-working guys in boxing right now.

Shane Mosley is wearing multiple hats, as he’s booked in a comeback bout (and rematch of their Sept. 2008 match, a 12-round KO win for Mosley, with one mere second remaining in the fight) Aug. 29, against rival Ricardo Mayorga, the cigarette-puffing pugilist who is one of the best trash-talkers this sport has even seen.

Mosley also happens to be the promoter of that fight and a card which will take place at the Forum in Los Angeles. I checked in with “Sugar Shane” to get an update on the multiple hat-wearing but, first, asked him to assess the Saturday welterweight clash between Paul Malignaggi and Danny Garcia, the wily vet (and still-reigning RING junior welterweight champion) with below-average power against the Philly fighter, who tells us he will be better than he’d been because he’s at the right weight class.

“I think it’s gonna be hard for Garcia to catch up with Paulie because Paulie is a good boxer and mover,” Mosley told me. “Plus, Paulie takes a good punch.”

Hmm, yes and no; historically, yes, but in his last outing, Malignaggi got steamrolled by Shawn Porter and dealt with a vicious concussion afterward. Hey, could that memory plague him on fight night? “No,” Mosley said, “Paulie is fine.”

So wait…are you calling for a Paulie win, an upset special? “We all saw Lamont Peterson beat Garcia pretty clearly though Danny got the ‘W’…so you never know but, if it goes to decision, anything can happen but my money is on Paulie.”

And what about his own sphere…is it loony trying to be a fighter/promoter? “Things are hectic; I’m not gonna lie,” he told me. “It’s hard to find time to train. I’m tired! Right now, I’m relaxing in bed and Tweeting! It’s between training and meetings…”

SSM said he is aided by the fact that, “I have a home gym and recovery center with a hyperbaric chamber.” He trains on the beach a lot and, of course, knows to train smarter, not harder, being he’s 43. Mosley (47-9-1, 39 knockouts) doesn’t spar every day because, hello, he knows how to fight. Rather, he will spar once every couple days. As far as the promoter in him, he’s thinking the name recognition he and Mayorga (31-8-1, 25 KOs) enjoy will mean he will get the attendance and pay-per-view buy rate he needs to make some moolah. That’s even though a Premier Boxing Champions card, topped by a Leo Santa Cruz vs. Abner Mares bout, runs the same night on free TV.

“The PBC card is terrible,” said Mosley, talking a better brand of trash than he did back in his heyday. “Boring. I’m a legend and me and Mayorga are both warriors!”