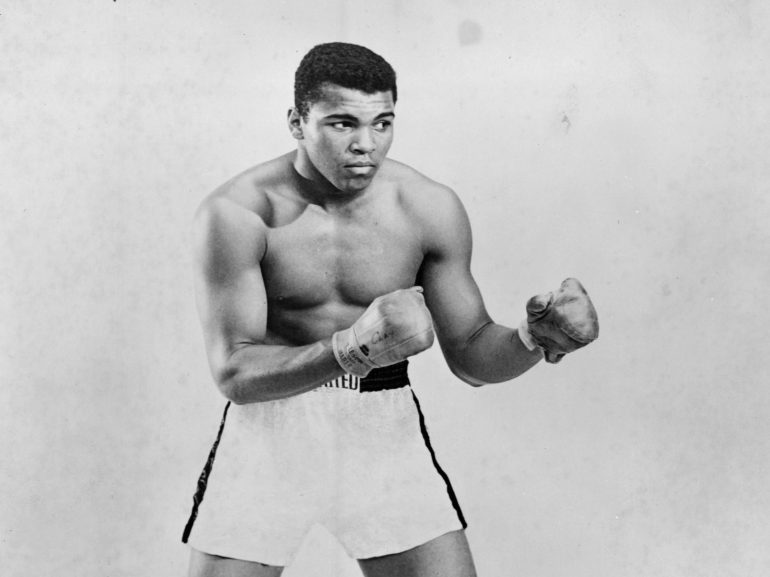 Photo from The Ring archive
17
Jan
by The Ring

Editor’s Note: This feature originally appeared in the February 1975 issue of The Ring Magazine. It was authored by Muhammad Ali and Bob Goodman.

I doubt it. At least not without changing the lists many times over.

I guess I have been asked to name “my toughest fights” at least a hundred times. And I have probably come up with as many different replies. It’s difficult because I consider all of my fights tough and all my opponents worthy.

Until this time I don’t think I’ve ever had to sit down and give it thought. Running true to form if you asked me the same question next week, my list might change again.

I’ve had too many milestones in my career to possibly think of picking fights on their importance.

There was probably no bigger challenge in my career than the one George Foreman posed in Kinshasa, Zaire. Strangely, although regaining my crown will remain one of my greatest thrills, it wasn’t one of my toughest fights.

The toughest would be my fight with Sonny Liston, when I won the title in 1964.

I was young and a great admirer of Liston’s talent. He could do just about everything except dance. But outside of myself, there’s never really been a dancin’ heavyweight. Liston had a tremendous jab, could punch with either hand, was smart in the ring and as strong as any heavyweight I’d ever seen.

He was ugly, too. In and out of the ring. Being a big underdog and acting crazy at the weigh-in made everybody think that I was scared half to death.

Sonny came out at the bell looking to take me apart. I moved and stuck, knowing that I was going gaining control in the second round. But the “Bear” was always dangerous. Stalking, glaring, mean.

About the fourth round my eyes stated burning. Finally, when I came back to my corner, I couldn’t see at all. I figured Liston had something on his gloves and asked Angele (Dundee) to cut my gloves off. He didn’t but gave my eyes a good wash, checked Liston’s corner, talked to the referee and tried to stall for more time.

The bell rang but my eyes were still burning and watering, Angelo gave me a good pat on the rear end and said “keep moving”.

Half-blinded, only seeing a blurred hulk, coming at me, I got on my bicycle. Luckily, I had enough instinct, speed and, yes, fear, to keep from getting tagged by the chasing Liston until my eyes started to clear.

I think he used up a lot chasing me and missing those big punches. He was tired and I knew I had regained control.

Like a wounded animal, with eyes swollen and cut, Sonny came out with a surge in the sixth round and connected with a good right hand but he couldn’t keep it going and I ended the round feeling like I was the new champ.

But I was still very relieved to see big Sonny remain on his stool when the bell rang for the seventh.

I still respect him as one of the truly great heavyweights of all time. 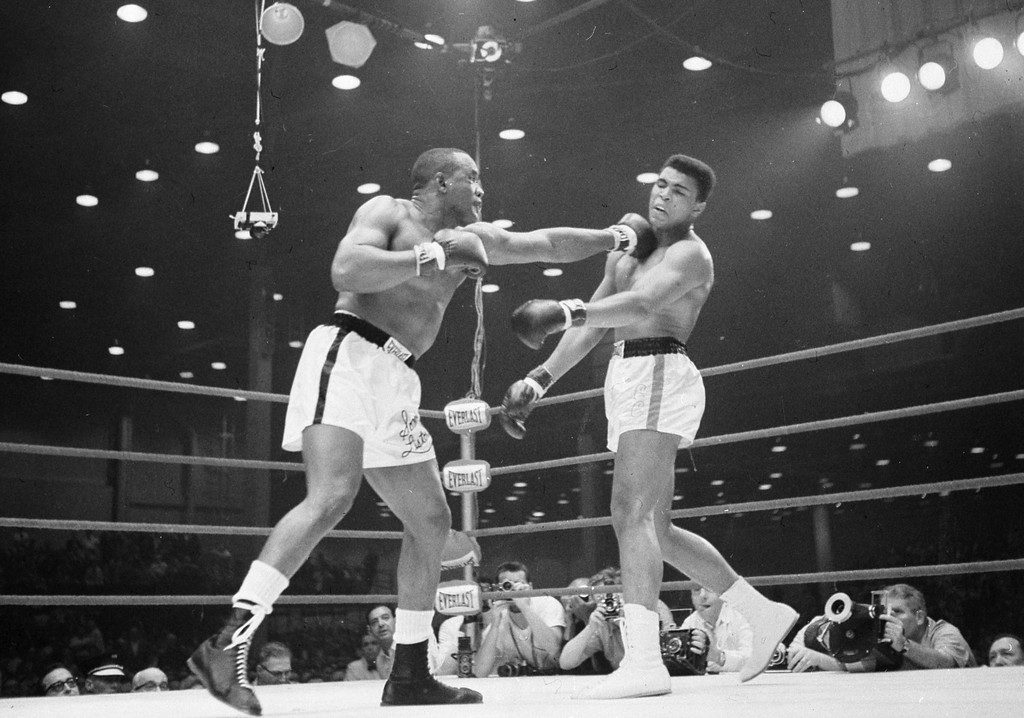 Ali (then Cassius Clay) slips the Liston jab in the first fight. Photo from The Ring archive

Jones had just come off a big knock out of Zora Folley. He was smart and hungry. I had put a lot of pressure on myself with predicting and tried to make it come true. The Garden was jammed and Jones was from New York.

All night long the determined Jones kept getting me with a looping right hand. He’d move in relentlessly and lead with the right. He was just throwing me off stride and I was very happy to be awarded a close decision.

Here I go, getting myself in deep trouble. That’s because I don’t know who could have been tougher than Joe Frazier the first time we met. He was really something that night, March 8, 1971, I’ll never forget the date.

Joe just kept coming. I thought that I won that fight but I don’t do the judging. Everybody remembers that one so I don’t have to go into it. He was a great heavyweight that night. His style will give me a tough fight every time.

Ken Norton was tough both times we fought. He broke my jaw in the first one, which I wasn’t in condition for. The second time, in Los Angeles, I was ready and won the early rounds but had to pull a split decision out in the last round.

Norton’s strength and jerky rhythm throws me off, and like Frazier, will always be a tough one for me to conquer.

I know the name Karl Mildenberger might not strike fear in to many men’s hearts but he was a rough one for me to figure.

I fought him in Germany in 1966. He was a southpaw and I had a lot of trouble getting untracked against his style. He could box pretty well and whacked me with a few good punches. I didn’t get him until the 12th round in what everyone figured would be an easy fight.

In my second fight since my layoff of over three years, Oscar “Ringo” Bonavena gave me a real tough 15 rounds.

Bonavena, short, awkward and strong, did everything but hit me in the kneecaps trying to win that one. I finally caught him coming in with a left hook in the 15th round. I was glad it was over after a grueling fight. 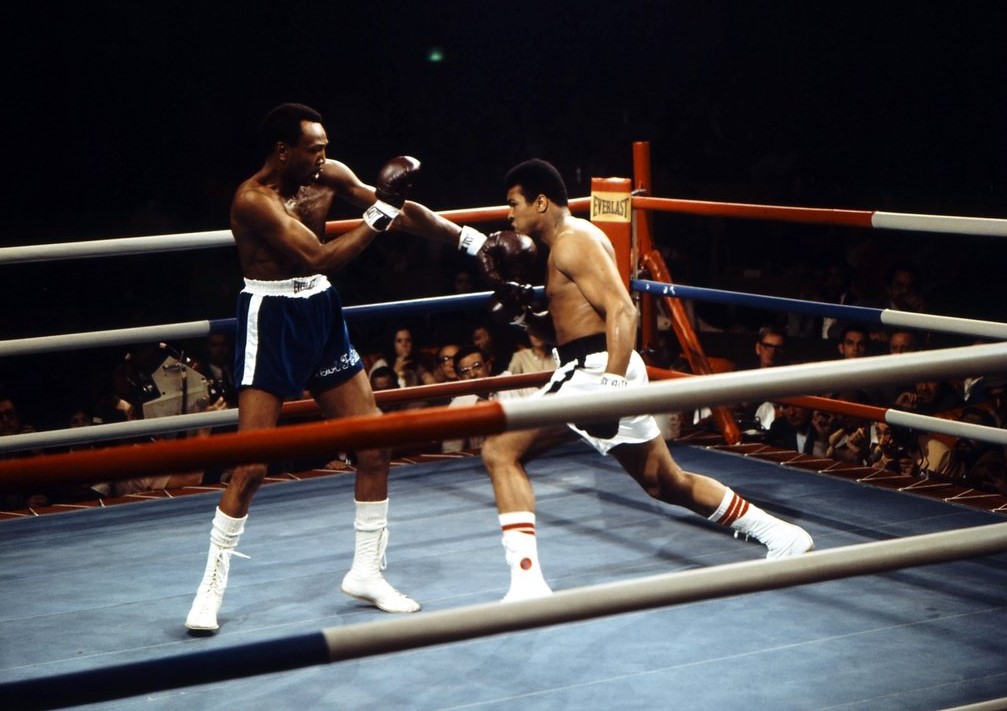 Then in 1972, I met light heavyweight champ Bob Foster in Lake Tahoe. I always respected him as possibly the greatest of all 175-pounders but I never figured he could handle me.

For almost four rounds, I laid on him and used my 41-pound advantage to tire him out. When I figured I had him weary, he started jabbing. I couldn’t believe he was out-jabbing me, the master of the jab. His jabs were sharp and hard. He caught me with some good combinations and shook me a couple of times.

For the first time in my career, I was cut with a crisp jab. He also had me swollen under the other eye and cut in the mouth but the weight took its toll and he went down for the seventh and final time in the eighth round.

It might sound funny but Jimmy Ellis, who was formerly my chief sparring partner, gave me a tough night in the Houston Astrodome.

Jimmy, who probably knew me and my moves better than I knew myself, was as smart as they came. He had pride and was a world champion too.

For seven or eight rounds, Jimmy gave me fits. He darted in and out and kept me under pressure with a good scientific fight. I started getting to him about the ninth round and the referee stopped it in the 12th.

Up jumped Joe Frazier again and as you can guess, it was another tough one but I wound up with the decision this time.

Joe was still his relentless self as he seemed to get stronger as the fight went on. I thought I had him going early in the fight but there was a little mix-up with the bell and the ref stepped in to early.

The fight was a good one and Joe remains high on my list in more ways than one. We are even at one and one and one maybe someday we can have the rubber match to settle the score. Joe would like that too.

Those are ten, which I was asked for but there are more that seem to belong in that top ten. 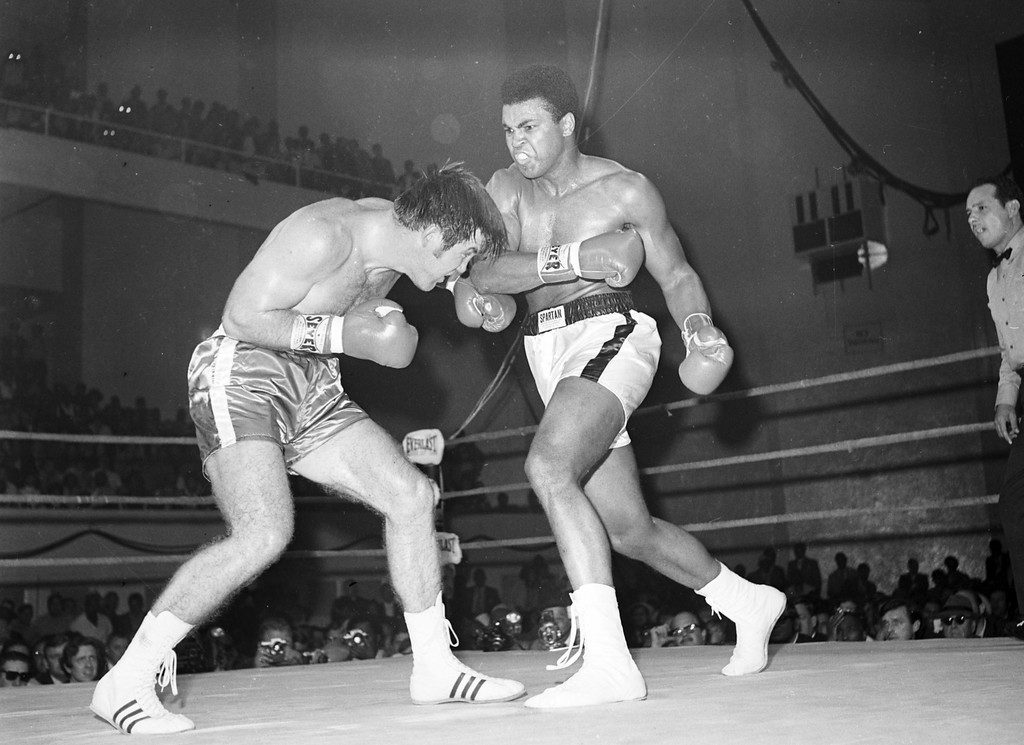 Ali puts the pressure on top contender Jerry Quarry in their first fight. Photo from The Ring archive

Jerry Quarry, in our first fight in Atlanta, was coming strong in the third when I stopped him on a cut. But that was my first fight back after the layoff and Quarry was probably too tough a choice. I was very fortunate to have had the fight stopped on a cut, which was a bad one.

Joe Bugner, the European champion, game me a tough 12-round decision fight in Las Vegas. That’s another fight that people figured with be easy but Bugner was determined, clever and fast.

Mac Foster gave me a grueling 15 rounds in Tokyo, Japan, that had to be one of my toughest fights from a physical standpoint.

Alvin “Blue” Lewis, whom I stopped in 11 in Dublin, Ireland, gave me much more trouble than I bargained for. I did have a bad cold going into the fight but that’s no excuse. Lewis was a good heavyweight who needed more breaks.

Speaking about tough, I don’t know who was ever tougher on me physically than “Granite Jaw” George Chuvalo. He gave me two tough distance fights for a total of 27 rounds and took everything I had to dish out and kept coming for more.

Henry Cooper, one of England’s greatest, sat me on my pants in London and was without a doubt one of the best I had met. His big trouble was tissue-paper skin.

Ernie Terrell, who is now making it as a singer with his own group, gave a tough account of himself against me at the Astrodome for the undisputed world championship in a fight I won over the 15-round distance.

As I said, they were all tough. I’ve never really had an easy one.

There will be more tough fights in the ring for me. But my toughest of all fights is still to come when I retire from boxing. That will be my continued fight to help my people.