Sergey Kovalev did his job as usual: Weekend Review 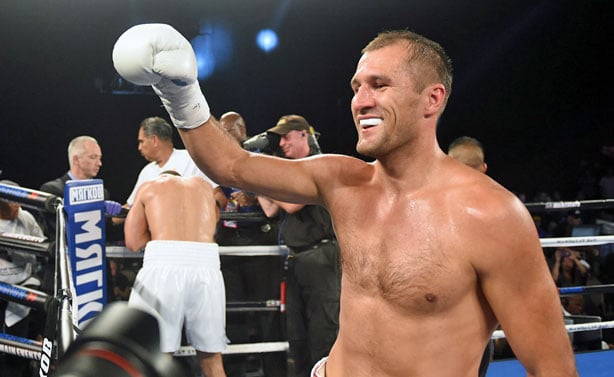 Sergey Kovalev: OK, none of us was the least bit surprised that Kovalev destroyed overmatched Nadjib Mohammedi in three rounds Saturday in Las Vegas. This was a mismatch that materialized only because Mohammedi somehow became the No. 1 contender for Kovalev’s IBF light heavyweight title. Not the champ’s fault. Kovalev (28-0-1, 25 knockouts) did his job as usual, brutally putting the Frenchman down twice and hurting him so badly that he could no longer fight 2:38 into Round 3. Competitive? No. Fun to watch? Yes. Fans love the knockout and they know they’re going to get it from Kovalev, at least the vast majority of the time. Mohammedi (37-4, 23 KOs) wasn’t much of a test but another dramatic knockout on national television only adds to Kovalev’s reputation as a cold, calculating assassin. I think he and Gennady Golovkin are in a class by themselves in terms of world-class ability combined with crushing power and killer instinct. They are two of only a handful of must-see fighters. What’s next for Kovalev? Of course, there’s Adonis Stevenson but it’s hard to imagine that fight happening. Then there’s Andre Ward. Not yet. A more realistic possibility is a rematch with Jean Pascal, although I’d rather see him fight the man Pascal outpointed on the undercard: Yunieski Gonzalez. Doesn’t really matter, though: I’d happily watch Kovalev fight anyone.

Pascal vs. Gonzalez: This is tricky because all three judges had the same score, 96-94 for Jean Pascal over Yuniesky Gonzalez on the Kovalev-Mohammedi card. One thing for which athletic commissions strive is consistency. And they seem to have got it in this fight. But did they really? The three judges were unanimous in only five of the 10 rounds, meaning they saw the fight differently even if their scores were the same. They would argue that some rounds were close, which might’ve accounted for the disparity to some degree. That’s a legitimate argument on the surface. The problem? In my opinion, there weren’t enough close rounds to give the fight to Pascal. I scored it 97-93 for Gonzalez, who took the fight to Pascal (30-3-1, 17 KOs) from the beginning, threw many more punches than the Canadian (632-397) and landed at least as many scoring blows as Pascal did. That’s a winning formula to me. I thought Pascal would take full control of the fight at times but he never did because Gonzalez, even when he tired, wouldn’t allow it. I don’t put too much stock in CompuBox stats but the numbers gave Gonzalez (16-1, 12 KOs) a slight edge: He outlanded Pascal in overall (163-154) and power (105-103) punches. I could accept 96-94 for Gonzalez or maybe even a draw if we give Pascal the benefit of all doubts. But 96-94 for Pascal? That’s hard to swallow.

Shumenov vs. Flores: I was watching the Beibut Shumenov-BJ Flores fight on NBC and scratching my head. The announcers kept telling me how good Shumenov looked and at least implied that the fight was compelling. I saw one reluctant fighter (Shumenov) backpedaling to avoid confrontation and landing a few punches here and there, a paltry average of 8.67 per round, according to CompuBox. Shumenov’s peformance was hardly a demonstration of beautiful boxing. I saw another, more aggressive fighter (Flores) failing miserably to cut off the ring and landing only on the few occasions when he could. A mere 9.75 of his punches found the mark. That’s compelling? Not in my opinion. Beibut, if you want to become a popular fighter, engage a little bit more. BJ, c’mon, find a way to take your opponent off his bicycle rather than chase him around. I also wonder about this decision – a unanimous one for Shumenov – even though all three judges saw it the same, 116-112 (eight rounds to four). I agreed with Flores’ sentiments after the fight: You can’t win a fight going backward for most of 12 rounds, particularly when you land so few punches. Flores didn’t land many more shots than Shumenov did but at least he was pushing the action. I think Flores deserved more credit than he received.

Golovkin vs. Lemieux: Say or think whatever you want about Golden Boy Promotions: Oscar De La Hoya’s company continues to put together can’t-miss matchups. Golden Boy has co-promoted or promoted at least three Fight of the Year candidates so far this year – Lucas Matthysse vs. Ruslan Provodnikov (with Banner), Canelo Alvarez vs. James Kirkland (with Leija-Battah) and David Lemieux vs. Hassan N’Dam. And now comes this news: Lemieux will face Gennady Golovkin in a battle of prodigious punchers on Oct. 17 in New York City on pay-per-view TV. Finally, Golovkin, promoted by K2, gets an opponent more than compelling enough to charge for the fight. I don’t see how anyone could dispute that. I believe Golovkin will win because he is a superior all-around fighter but Lemieux’s power is the X factor that gives him a chance in any fight and will draw fans in. I know I’m not alone when I say I can’t wait to see this one. And, of course, it doesn’t end there for Golden Boy. The company and Roc Nation are closing in on a deal that will match Miguel Cotto and Canelo Alvarez in November, which arguably is the biggest possible matchup after a Floyd Mayweather Jr.-Pacquiao rematch. Keep ’em coming.

Kovalev has a reputation for being a menacing, heartless knockout artist who somehow derives pleasure for inflicting pain. I think his post-fight interview after he dismantled Mohammedi made it clear that’s it’s more than mere bloodlust. He was asked what was on his mind when, after the first knockdown, he motioned for Mohammedi to get up and continue fighting. “I called him stand up,” Kovalev said in his improving English, his way of saying he wanted to give the fans more. “It was a short show. People didn’t see boxing, just one round. A small fight. I tried to continue, to make a longer fight. It happened what happened.” ÔÇª Former two-division titleholder Brian Vilora (36-4, 22 KOs) put a Omar Soto (23-12-2, 15 KOs) down three times en route to a first-round knockout Saturday in Hollywood, California. I wouldn’t read too much into the victory because Soto is in decline but it keeps the popular Viloria in the mix for at least one more big fight. I don’t like his chances against RING flyweight champ Roman Gonzalez but he deserves the opportunity.