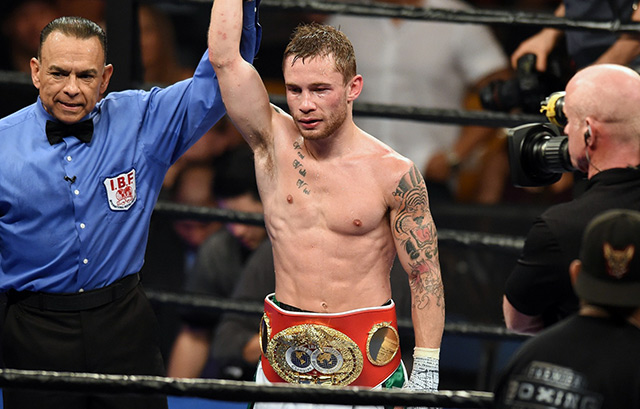 Carl Frampton: The junior featherweight titleholder from Northern Ireland got off to a horrible start against Alejandro Gonzalez Jr. on Saturday in El Paso, Texas, going down twice in the first round of his much-hyped U.S. debut. And he failed to realize his stated goal of stopping his little-known Mexican opponent. That’s the bad. The rest was good – very good. Once Frampton settled down he fought with precision and controlled aggression, as we had anticipated, to dominate a solid opponent and win a one-sided decision. Gonzalez (25-2-2, 15 knockouts) ultimately couldn’t cope with Frampton’s tight technique, extremely quick hands and heavy punches. The challenger remained on his feet for 12 rounds, which says as much about his resilience as Frampton’s power, but make no mistake: He took a beating. The scores reflected Frampton’s dominance. He won 10 of 12 rounds on two cards and nine of 12 on the third. If you want to say that Frampton (21-0, 14 KOs) didn’t live up to his billing overall, that’s fair. Expectations were enormous. It’s not fair to say that he failed in any significant way. He overcame the first-round adversity – which is what the best fighters do – to win convincingly and retain his title. That’s a successful night. I would love to see him face the Leo Santa Cruz-Abner Mares winner. And I wouldn’t be the slightest bit surprised if he emerged with his hand raised based on what I saw on Saturday.

Julio Cesar Chavez Jr.: Is anyone really surprised that Chavez failed to make weight and then looked flat in his fight against undersized Marcos Reyes on Saturday in El Paso even after his putrid performance against Andrzej Fonfara in April? The former middleweight titleholder exceeded the 170-pound limit by .8 pounds. So much for his promise that things would be different. And his performance against a naturally much smaller man was mediocre. Chavez did well when he let his hands go but was passive at times, which might’ve been a product of his less-than-stellar conditioning. That allowed a confident Reyes (33-3, 24 KOs) to land his own shots and turn what could’ve – should’ve? – been a wipeout into a competitive fight. Chavez (49-2-1, 32 KOs) won by a unanimous decision but gave us no reason to be enthusiastic about his prospects going forward. I must acknowledge again that Chavez accomplished more than I thought he would in spite of his bad habits. And, honestly, I’m not sure how much more he could’ve accomplished even if he trained with more discipline. He worked hard enough – and had enough natural ability – to make his mark in a sport once dominated by his father but was never destined to do much more than that.

Scott Quigg, not Frampton, was the best junior featherweight from the U.K. on Saturday. The Bury product, fighting in front of his fans in nearby Manchester, stopped former world titleholder Kiko Martinez (32-6, 24 KOs) in only 4 minutes, 4 seconds of fighting. The stunning result was a big statement given Martinez’s reputation. The Spaniard was stopped by Frampton in nine rounds in 201 but took him the distance last September, losing a unanimous decision. A Frampton-Quigg matchup would be huge in the U.K. and one I would pursue vigorously if I were them. Such compelling regional matchups don’t present themselves often. Who would win? I don’t think Quigg (31-0-2, 23 KOs) can match Frampton’s speed and explosiveness, which is why I’d give the Irishman the edge, but I wouldn’t sell Quigg short. He proved against Martinez that he’s a threat to any 122-pounder. Quigg more likely will face Nonito Donaire next, another compelling matchup. The fight reportedly could take place in Dubai. ÔÇª Chris Arreola (36-4-1, 31 KOs) was lucky to emerge with a draw against unheralded Fred Kassi (18-3-1, 10 KOs) on the El Paso card. I thought the longtime heavyweight contender, unable to land punches consistently, lost six of 10 rounds against the surprisingly slick native of Cameroon but two of three judges gave Arreola one more round than I did. That resulted in a majority draw. I don’t think Arreola earned a shot at Deontay Wilder’s WBC title but he didn’t lose and has name recognition. We’ll see what happens. ÔÇª

Arthur Abraham (43-4, 29 KOs) stopped Robert Stieglitz (47-5-1, 27 KOs) in the sixth round of the fourth (and presumably last) fight between them to win the series 3-1 and retain his WBO super middleweight title Saturday in Germany. I must again give him credit. I was among those who wrote him off after his disastrous results in the Super Six World Boxing Classic. He’s 11-1 overall and 7-1 in world title fights since he was shut out by Andre Ward in 2011, although he hasn’t ventured out of his home country of Germany since the Ward fight. ÔÇª Cesar Cuenca of Argentina proved you don’t necessarily need punching power to win a world title when he easily outpointed Ik Yang (19-1, 14 KOs) to win the vacant IBF junior welterweight title Saturday in Macau. Cuenca (48-0) has only two knockouts, which is as big a feat as winning a major belt. How is that even possible? ÔÇª Donaire (35-3, 23 KOs) stopped obscure Frenchman Anthony Settoul (20-4, 8 KOs) in two rounds on the Macau card, his second consecutive victory since Nicholas Walters tore him apart last October. I’d like to see the 32-year-old Filipino-American get the fight against Quigg. He has earned it.