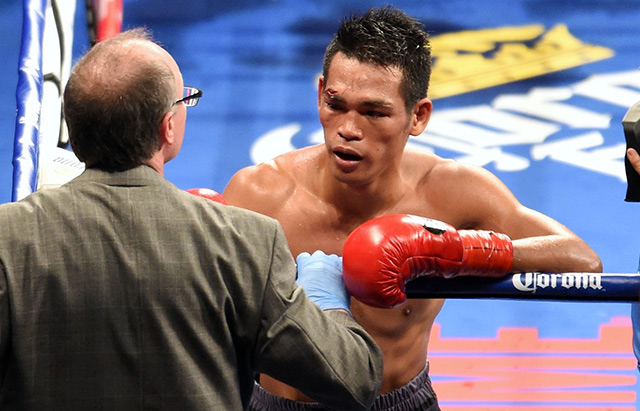 Arthur Villanueva is examined by the ringside doctor after suffering a fight-ending cut due to an accidental headbutt during his IBF 115-pound title bout with McJoe Arroyo on July 18 in El Paso, Texas. Photo by Naoki Fukuda

Junior bantamweight contender Arthur Villanueva arrived in El Paso, Tex. with high aspirations, but will return to his native Philippines with four stitches in his eye and without the title belt he challenged for.

The 26-year-old Villanueva (27-1, 14 knockouts) suffered his first career defeat, losing a technical decision to Puerto Rico’s McJoe Arroyo (17-0, 8 KOs) in a vie for the vacant IBF junior bantamweight title on the Showtime-televised card on Saturday night at the Don Haskins Center.

Two of the judges scored the fight 98-91 while a third had it 97-92, all for Arroyo, after the fight was stopped at 2:05 of the tenth round due to a cut on Villanueva’s right eye.

The fight was lackluster and marred by headbutts and excessive clinching, but punch stats showed Villanueva working at a busier rate (95-494 to 77-278), and Villanueva thinks he should’ve been awarded the decision.

“The fans who watched the fight, they booed,” Villanueva, RING’s no. 6 rated junior bantamweight, tells RingTV.com.

Villanueva, a native of Bacolod City, Philippines, lost a point in round six for headbutts, but ended up being the one who was cut in that round.

“In the sixth round round is when they’re supposed to stop it if they wanted to. In the tenth [the referee] stopped it because he sees McJoe Arroyo is getting weak and not punching.”

“That’s the decision they give us, we never complain only the fight fans can decide and make a comment about the fight,” Villanueva’s trainer Edito Villamor said. “But one thing I can say that Arthur give a good show here in El Paso and when Jimmy Lennon announced the decision the fans are booed the winner.”

The loss adds to the recent slump of Philippine boxing. After Manny Pacquiao, Nonito Donaire Jr and Brian Viloria lost their world titles, and Johnriel Casimero and Milan Melindo fell short in their title fight opportunities, only Villanueva’s ALA Promotions stablemate and RING junior flyweight champion Donnie Nietes remains champion in the Philippines.

If there’s a silver lining to the loss, it’s that Villanueva showed he could compete at a world level following back-to-back subpar performances against Fernando Aguilar and Henry Maldonado.

For Villanueva, his flight home will be spent thinking of getting another opportunity.

“Yes, if I have a chance,” Villanueva said of a rematch.