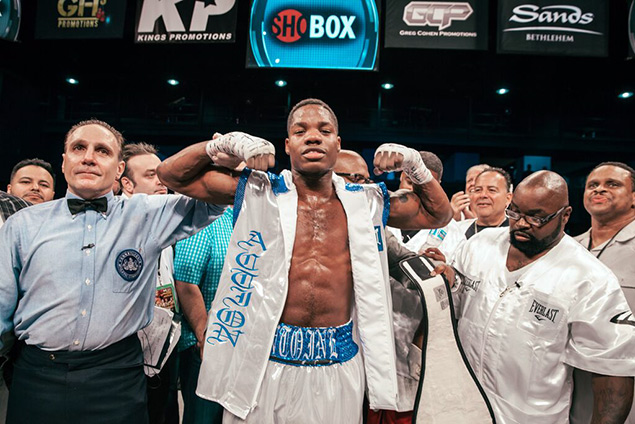 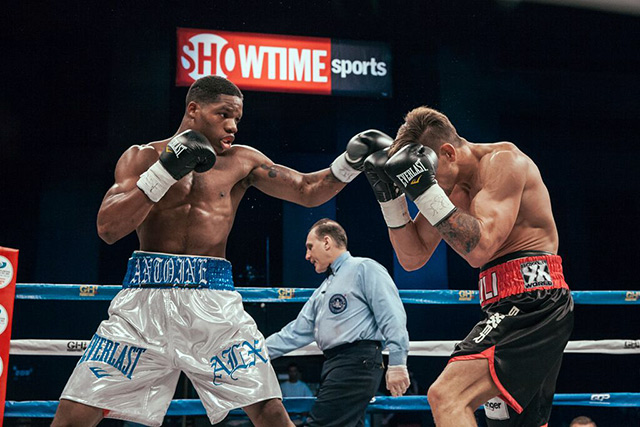 Friday night’s third-round knockout victory over the previously undefeated Istvan Szili (18-1-2, 8 knockouts) at the Sands Casino Resort Bethlehem may have been the convincing point Douglas needed to make to get some larger air time on Saturday nights.

A short right knocked Szili down in the second, and Douglas finished him off with a pair of knockdowns in the third, when referee Gary Rosato waved it over at :29 in the round for the unbeaten Douglas (18-0-1, 12 KOs).

“This feels great, but the fashion of this fight feels even better winning by knockout,” Douglas said. “The plan is to always move forward. I planned on boxing from the outside. The knockout came and it was beautiful. The plan was to pick him apart. I just picked him apart sooner than I thought. I knew he was going to come straight forward. I didn’t know if he was going to stand right in front of me. Fighters watch opponent’s tape, and they plan differently. From watching tape, I knew he was open around the corners of his gloves. His defense was tight, but his defense was only tight in front. We wanted to jab, then sneak around the corner.”

There’s not more sneaking around for Douglas. He’s establishing himself as a primetime player in the middleweight division, possibly appearing soon in primetime.

In the co-feature, Russian Arif Magomedov (16-0, 9 KOs) was just as impressive as Douglas, remaining undefeated by winning a 10-round middleweight unanimous decision over lethargic 6-foot-4, southpaw beanpole Derrick Webster (19-1, 10 KOs), who suffered his first defeat. Magomedov played the role of stalker, stepping to Webster at opportune times and attacking up and down. Webster hardly used his superior height and reach advantage. Magomedov won by basically burrowing ahead and cutting off the ring. Webster was so inactive that he made Malik Scott look like Arturo Gatti.

By the seventh, Webster appeared spent. Magomedov caught him with a right-left combination that sent the lanky middleweight to the canvas. The knockdown definitely struck a nerve with Webster, who was far more active in the ninth, using his jab and keeping Magomedov at a safe distanceÔÇötactics he should have been using much earlier in the fight. For good measure, Magomedov knocked Webster down a second time in the 10th with a right. In the end, the Russian left no doubt on the scorecards: Magomedov won easily 99-89 by all three judges.

On the TV undercard, in an eight-round light heavyweight fight, southpaw Samuel Clarkson (15-3, 9 KOs) pulled off a mild surprise by stopping Jerry Odom (13-2, 12 KOs) at 1:15 of the third round when referee Shawn Clark waved it over. Odom tasted the canvas three times, once in the second and two more times in the third. A right uppercut in the waning seconds of the second round led to Odom’s downfall.

“We’ve been working on the uppercut all camp,” Clarkson said. “One thing I noticed is when fighters come with the right hand, they’re real vulnerable to the left and right uppercuts. So when I saw him leaning in, his head really wasn’t moving with his punches, I just slipped and threw the right uppercut and hit him right there on the button. This is a blessing. We had a lot of struggles getting here and we made it. I was up in weight. I wasn’t supposed to win, but you can’t judge a fighter by his record. I studied this guy for five to six weeks. Everything I expected he did. I’m officially moving up to 175.”

A stunned Odom said afterward, “In the world of boxing, you get caught. Tonight I got caught. This is just a small setback. I’ll be back.”

In a 10-round super bantamweight fight, Adam Lopez (13-0, 6 KOs) knocked down Eliecer Aquino (17-1-1, 11 KOs) in the first round en route to a majority decision victory by scores of 96-93 (2). Judge Steve Weisfeld had it a 95-95 draw. Aquino was an unknown entering the bout. All anyone knew was that he was a “Sampson Lewkowicz fighter” and Showtime may not have even had any film of him, basically going on word of mouth as to how good he was. Lopez used distance and a good jab to win a borefest. There was some excitement, but regrettably, it came after the bell ended the ninth, when the two fighters continued to exchange blows. Lopez got the final shot, nailing Aquino on the chin, before referee Gary Rosato stepped between them.

“I knew nothing about him, and every round I had to learn a little more about him,” said Lopez, who went 10 rounds for the first time in his career. “I dropped him early, but I thought I won by a bigger margin than that. I dropped him with a right hand. Jab, jab, jab, boom, caught him with the right, and down. He was a tough dude. He was a very tough guy. He threw a lot of power shots. He really sat on his shots. He tried to load up on the right hand. He didn’t really have a hook, so I was basically trying to block the right hand.”

Philadelphia super lightweight Samuel Teah (6-1, 3 KOs) beat Ray Velez (3-8) in the first fight of the night. In what looked like the first upset of the night, super middleweight Rob Brant (16-0, 10 KOs) recovered from a first-round knockdown to stop Ernesto Berrospe (10-8, 5 KOs) at :33 of the third round. Botirsher Obidov (2-0-1) won a spirited, four-round, split-decision super middleweight fight over Philadelphian Christopher Brooker (3-1, 3 KOs). Middleweight Ricky Nuno (2-0, 1 KO) spoiled the pro debut of Tim Kunkel, knocking him out cold at :57 of the third round.

“I didn’t know anything about Garcia,” Folly said. “I each time you fight, each sparring session, each time you put on gloves you have to learn something. If you don’t, it’s time that you get out of the game. Tonight, I think I learned patience. Sure, I wanted to get more rounds in. At this point, being a cop, I would like to get three or four fights in a year.”