50 Cent files for bankruptcy, is he done with boxing? 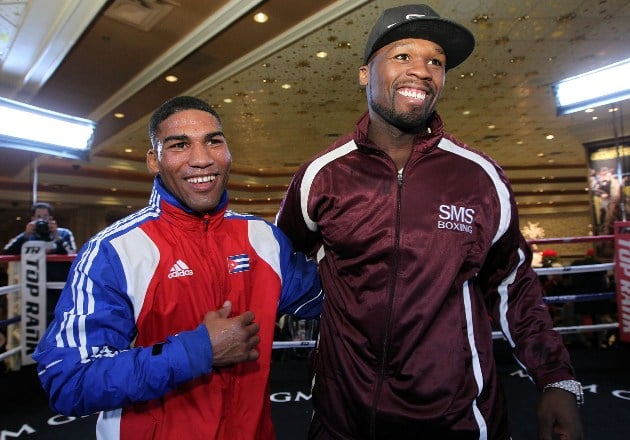 The boxing game can be unforgiving to the participants, both in the ring and out. Rapper 50 Cent tried his hand on the promotional side, and it seems, he’s finally thrown in the towel.

The man born Curtis Jackson filed for Chapter 11 bankruptcy protection on Monday, and it is being speculated that the bankruptcy move came about in relation to the Friday judgement against the entrepeneur, wherein he was ordered to pay a woman $5 million because, the court decided, he posted a sex tape in which she appeared. That effort came about supposedly as part of a beef with a rival rapper.

One might think him declaring bankruptcy means he’s broke; au contraire, I think. E News saw documents that said he has assets adding up to between $10 and $50 million…and liabilities in the same wide range ballpark. He has made no indication and I have no whispers that he is insolvent.

50 jumped into the boxing biz in the summer of 2012, and went out on his own after he friendship with Floyd Mayweather soured, by that fall. heads were scratched at some of his signings, and it seemed as though he went at it in a half measure. Naysayers wondered why his building blocks were of the ilk of Billy Dib, no stumblebum, but on no one’s pound for pound lists. Why was such a man of means going after talent not universally regarded as top tier, people wondered…

The old joke came to mind…What’s the quickest way to make a million bucks in boxing? Start with two million and proceed from there…

I reached out to a rep for the rapper, to see where he stands in the boxing business, or he has quit on his stool, and will insert a reply if one arrives.

With all that, one also wonders: what happens to the boxers who have been and are promoted by Fiddy? The most high profile is James Kirkland, last seen in a fan friendly rumble with Canelo Alvarez. What becomes of the Texan? I reached his manager, attorney Mike Miller. He told me, “We will move to separate ourselves from SMS (the 50 Cent boxing promotional company). Kirkland’s contract with SMS is unassignable so it cannot be assigned to any other entity without our permission and we have no intent on agreeing to our contract being assigned to anyone. Kirkland only has so many years left to fight and he needs to move on (to another promotional deal).”
Follow Woods on Twitter. https://twitter.com/Woodsy1069