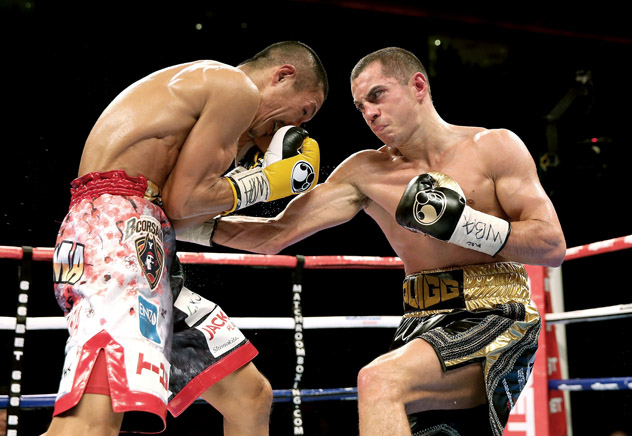 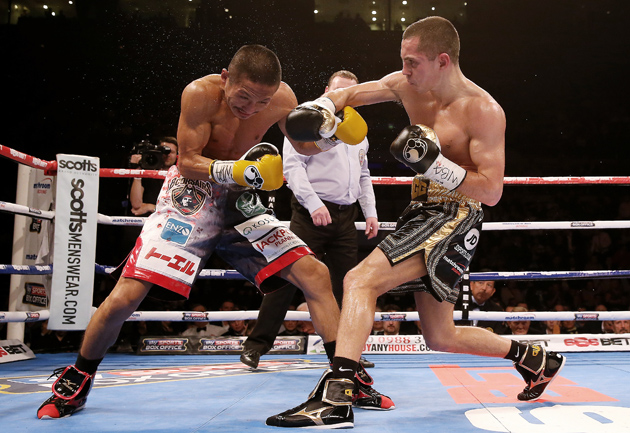 This Saturday British boxer-puncher Scott Quigg looks to bounce back from injury and inactivity when he faces former IBF beltholder Kiko Martinez in Manchester, England.

Last November, Quigg dished out a fierce, 12-round thrashing to Japanese contender Hidenori Otake and sacrificed his own right hand in the process. The Englishman snapped two tendons on Otake’s skull and was forced to convalesce for a two-month period.

“It was the first time where I’ve ever been limited to what I could do in the gym and that was very hard for me,” said THE RING No. 3-rated junior featherweight, who is a notorious gym rat.

“On a positive note I was forced to rest my body, so the time off has done me the world of good and my hand is fully healed. I’m lucky to have such a great team around me and everyone came together. I feel that my overall game has improved by at least 20 percent and I’ve taken my skill and technique to a whole new level.”

Although negotiations have barely gotten off the ground, Quigg (30-0-2, 22 knockouts) has been linked to a showdown with domestic rival Carl Frampton for over two years. With options sparse, Quigg has settled on the very opponent that Frampton dominated to become IBF world titleholder last September.

“I was instrumental in selecting Kiko,” said the 26-year-old Quigg. “We had tried, unsuccessfully, to make the Carl Frampton and Leo Santa Cruz fights and also had a look at (Nonito) Donaire who, it turned out, was already scheduled to fight in Macau, China, on the same night.

“As you go down the line, Kiko stands out because he is one of the top junior featherweights out there and his team accepted. The fact that Carl fought him twice means people will compare our performances, and I’m motivated to be at my very best for this one.”

Frampton will actually defend his IBF title against Alejandro Gonzalez, in Texas, on the same night Quigg faces Martinez. Since the latest round of talks for a Quigg bout fell through, the Belfast man has also signed up American boxing mogul Al Haymon to an advisory role.

“In my opinion a fight with Frampton is now easier to make,” Quigg said. “Eddie (Hearn) can deal with Al Haymon now, rather than Barry McGuigan (Frampton’s manager), and if Carl and I win on July 18 then hopefully we can get it on. It’s the biggest matchup in the division and even the American fans want to see it.

“Still, my focus is on July 18 and what could come next has only increased my focus and determination. That’s just the way I am.”

Despite Quigg entering as the favorite, there are those who feel that Martinez will pull the upset this weekend. The rugged Spaniard brings the kitchen sink to each and every fight, and Quigg has diligently studied his strengths and weaknesses over the years.

He said, “A lot of people don’t give Martinez enough credit for his boxing brain. He uses his jab well, cuts the ring off effectively, and knows when to bring in the big shots. He’s economical with his punch output, and very knowledgeable, which is why he’s a former world champion.

“It’s a fight that I’m looking forward to and one that I’m confident of winning. Kiko obviously wants me to stand and have a fight with him, and I might just do that, but I’m a professional and ultimately I’ll look to make this fight as easy as possible. My job is to offset him and use my smarts.”

On the same card, Quigg’s stablemate, Anthony Crolla, challenges Colombian Darleys Perez for the WBA lightweight title. Last December, the 28-year-old was seriously assaulted while foiling a burglary attempt at a neighbor’s home and there was doubt as to whether he would fight again. Crolla sustained a fractured skull and a broken ankle, and also lost a January date with then-champion Richar Abril.

“I believe Anthony can win this fight against Perez,” Quigg said. “He recovered very quickly from his injuries because he lives the life and I’ve never seen him better. This fight is exactly what he needs. To win a world title is his dream and we’ve been pushing each other all the way through this training camp.

“Style-wise, he matches up better against Darleys Perez than he did against Richar Abril and Anthony is more than ready for this. His technique and skill has improved and his body looks tremendous. Both of us will win on July 18 and we will turn in the best performances of our careers.”

Both fights will be shown live at 7.00 p.m. on Sky Sports 1 and Sky Sports 1HD in the U.K. Tickets are available from www.matchroomboxing.com.