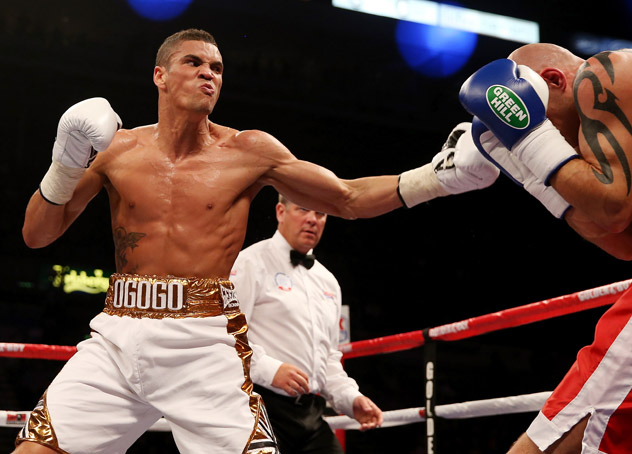 British middleweight talent Anthony Ogogo (7-0, 4 knockouts) will look to make inactivity a thing of the past and is eager to impress in his ring return against Ruslan Schelev (11-3, 6 knockouts) on July 18 at Gerry Weber Stadium in Germany.

Ogogo won Olympic bronze at London 2012 and got off to a promising start in his professional career, before a long-standing Achilles issue led to 11 months out of the sport. Fully recovered, the 26-year-old is now in fighting shape and is delighted to be back after signing a groundbreaking, co-promotional deal with Team Sauerland and Golden Boy Promotions.

“After such a long layoff, it means everything to me to be back in the ring,” Ogogo said. “I wake up in the morning wanting to be a world champion. For the longest time, I couldn’t do anything about it physically. I couldn’t train. My feet were in casts but I never stopped thinking about being the absolute best. I watched sports documentaries of my idols and I read autobiographies of my heroes until I was able to get back in the gym.

“I had resigned myself to never being able to run again because of my injuries but everything has gone so well, much better than I could have ever imagined. I’ve been able to run five miles easily and there’s not even a twinge in my Achilles. My fitness is good; my speed is where it needs to be and sparring has gone brilliantly. I’ve been sparring with my George Groves ahead of his own world title fight [against WBC super middleweight titlist Badou Jack].”

Tickets are available by calling the Gerry Weber Ticket Centre on (+49) 5201 81 80 or online via http://www.gerryweber-world.de and http://www.tickethall.de. All the action will be shown live on SAT.1 in Germany and Sky Sports in the UK.