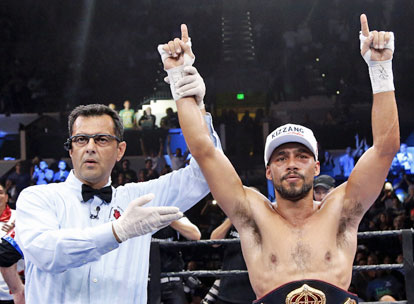 Keith Thurman: There are at least two ways to look at Thurman’s performance against Luis Collazo on Saturday night in Tampa, Florida, near Thurman’s hometown of Clearwater. One is to say that he did more than enough to beat a tough, resourceful veteran. And he overcame adversity – a body shot that hurt him in the fifth round – to do it. That’s a legitimate perspective. Another is to say that he should’ve been more dominating against a huge underdog, who quit after the seventh round because of a cut that was caused by an accidental head butt. That’s also a legitimate perspective. I thought Thurman looked pretty good, particularly in the early rounds. He played the sharpshooter from the outside but also stood his ground at times to land hard, pinpoint punches. He was up on the cards when the fight was stopped and deserved it. However, beginning in the third round, it became clear that Thurman couldn’t hurt Collazo enough to keep the underdog off of him. That was surprising given the Floridian’s reputation. And he might’ve done more damage had he thrown more combinations than he did; instead, he generally threw one punch at a time. In the end, it was strange to see Thurman backpedal for much of the fight, fail to hurt Collazo and fail to take complete control of the fight. Was it a poor performance? Hardly. As I said, anyone who can beat Collazo clearly has accomplished something. It just wasn’t a special performance. And that’s what we’ve come to expect from Thurman (26-0, 22 knockouts).

Luis Collazo: Collazo (36-7, 19 KOs) was an afterthought, a solid, well-known veteran chosen to fight Thurman because he would put up some resistance but ultimately lose to the rising young star on a big stage. The Puerto Rican-American was a solid but generic opponent. Such a fighter normally wouldn’t appear in this column because of the role he was hired to play. However, the manner in which Collazo retired in his corner begs discussion. I’ll say it for the umpteenth time: I have profound respect for any man or woman who has the guts to step through the ropes and do battle. That will never change. And I can’t put myself in Collazo’s shoes as he sat in his corner after the seventh round, when he made it clear he could no longer fight because he couldn’t see through his right eye as a result of the cut. I don’t know what that’s like. I feel comfortable saying this, though: I’ve seen many fighters with such cuts – or ones that were worse – find it within themselves to continue nevertheless. I thought Collazo was one of those fighters. That’s why I and, I imagine, many others were stunned when he quit. And I don’t buy the suggestion that the decision was anybody’s but Collazo’s. He was asked whether the fight should be stopped and he replied, “Yeah. I can’t see.” He quit, which I believe means the officials made the right decision to award Thurman the victory rather than go to the scorecards. I don’t think this is a significant stain on Collazo’s solid career. His decision to retire on his stool was merely disappointing.

Herrera vs. Lundy: The junior welterweight bout between Mauricio Herrera and Hank Lundy was a spirited, if ugly scrap that was building toward an interesting conclusion when it also ended prematurely because of a gaping cut above Herrera’s right eye, the result of an accidental head butt, Saturday at the Los Angeles Sports Arena. I think both fighters deserve credit after the unfortunate ending. Herrera (22-5, 7 KOs) demonstrated considerable courage by fighting through two nasty head collisions, the first of which caused what became a horrible cut. And he finally caught a break on the cards after a very close fight that ended 2:09 into Round 5, winning a majority decision – 48-47, 48-47 and 48-48. (I scored it 48-47 for Herrera.) The victory doesn’t compensate for disputed losses to Danny Garcia (for the RING and sanctioning-body 140-pound titles) and Jose Benavidez but it has to feel good to have one go his way. Lundy (25-5-1, 12 KOs) and some fans thought he was cheated, making this the second consecutive fight in which he lost a close decision. He lost a split nod to Thomas Dulorme in December. Lundy’s reputation didn’t take a hit, though. He fought with great energy and purpose, which is attractive to fans. There were no losers in this fight. Rematch?

Naturally Thurman called out Floyd Mayweather Jr. immediately after his victory over Collazo, which was obligatory given the amount of money he would stand to make against “Money.” Thurman is as legitimate a challenger as almost anyone but the fighter we saw on Saturday didn’t appear to be polished enough to present a serious challenge to the No. 1 fighter in the world. ÔÇª Willie Nelson (24-2-1, 14 KOs) did what it took to keep himself in contention for a junior middleweight title, stopping Tony Harrison (21-1, 18 KOs) with two hard rights in the ninth of 10 rounds on the Thurman-Collazo card. Harrison was hoping to demonstrate that he’s a star-to-be and fought like it much of the fight, consistently beating Nelson to the punch and outworking him. Harrison was leading on two cards while the third was even. However, that amounted to nothing when a shot high on his head and a follow up to the side of head put Harrison down and out. Harrison is only 24; he’ll be back. Nelson avoided consecutive losses after losing to Vanes Martirosyan in his previous fight to remain relevant. ÔÇª Another important fight ended prematurely Saturday, albeit from an injury more unusual than a cut. Jose Zepeda (23-1, 20 KOs) dislocated his left shoulder in the second round of his title fight against hometown fighter Terry Flanagan, which made it impossible for him to come out in the third round in Manchester, England. Thus, Flanagan (28-0, 11 KOs) won the vacant WBO lightweight title in an unsatisfying manner. Once again: Rematch? ÔÇª Joseph Diaz Jr. (17-0, 10 KOs) received the kind of challenge from Rene Alvarado (22-5, 15 KOs) on the Herrera-Lundy card that allows a rising prospect to grow. Alvarado, a tough, skillful Nicaraguan, took it to Diaz from the beginning and it was all Diaz could do to fend him off. Diaz emerged with a unanimous-decision victory and invaluable experience in the 10-round featherweight fight. ÔÇª Ruslan Chagaev (34-2-1, 21 KOs) stopped Francesco Pianeta (31-2-1, 17 KOs) in the first round to successfully defend what the WBA shamefully calls its “regular” heavyweight title. I hope everyone knows by now that the “regular” title is utterly meaningless.