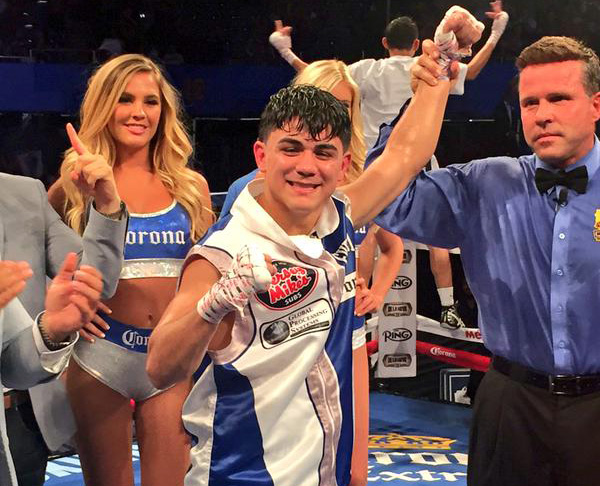 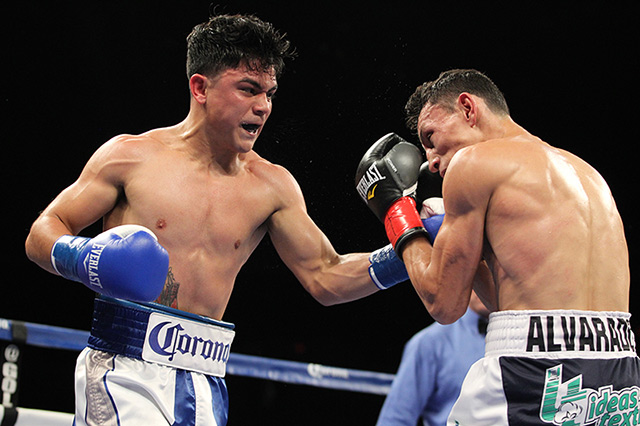 LOS ANGELES – Joseph Diaz Jr. held on to his unbeaten record against gritty contender Rene Alvarado in a fast-paced 10-rounder on Saturday at L.A. Sports Arena but the touted featherweight prospect had to work very hard for his decision victory.

Diaz (17-0, 10 KOs) had to dig deep to hold off the relentless, volume-punching Nicaraguan long enough to land eye-catching head shots, which ultimately swayed the judges into awarding him points verdicts of 98-91, 96-93 and 95-94. Most of the live audience agreed with the 95-94 scorecard. Some thought Alvarado (22-5, 15 KOs) did enough to earn the decision.

He certainly pressed the fight and let his hands go, despite suffering a questionable knockdown in Round 1, setting a torrid tempo that was carried until the final bell. In fact, if anyone was gassed in the final rounds, it was Diaz, who was forced to hold at times.

However, the younger man found the right distance to get off with head-snapping shots in the majority of rounds.

“I felt great,” Diaz, from South El Monte, California, said after the fight. “I knew Alvarado was going to bring it and we fought 10 hard rounds. But, I landed the bigger shots, the harder shots, and that made the difference.”

Alvarado agreed that it was a tough fight but he thought he won it.

“I think it was an exciting fight, a fight for the people,” he said. “It was his first big test and he did a good job, but I feel that I dominated the fight and the win should have been mine.”

Popular L.A. native Nick Arce was the beneficiary of an unpopular stoppage when referee Wayne Hedgepeth halted his scheduled four-round junior lightweight bout against Ricardo Alvarado at 1:35 of Round 2. Arce (4-0, 4 KOs), who stalked the Texas journeyman with jabs and body shots, was in control at the time of the stoppage but Alvarado (7-7, 6 KOs) did not appear seriously hurt or helpless.

“I was ready to fight” Arce said after the fight. “I had prepared for this moment but you got to respect the referee’s decision. The guy wasn’t throwing back so the referee decided to stop the fight. He is the third man in the ring and you have to do what he tells you to keep this sport safe.”

Former Irish amateur star Jason Quigley dropped Tom Howard twice in Round 2 of their scheduled six-rounder, forcing referee Thomas Taylor to halt the bout at 1:21 of the round. 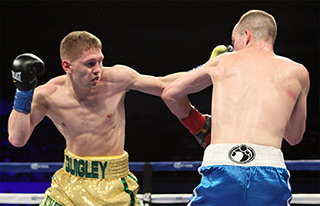 Quigley (7-0, 7 KOs), of Donegal, Ireland, now living and training in Los Angeles, landed an assortment of power shots behind a sharp jab before zeroing in with quick right hands that produced the knockdowns. Howard (8-4, 4 KOs), a capable boxer from Trenton, Michigan, tried to keep up with the talented middleweight prospect’s fast pace and high workrate but simply could not compete.

“I always prepare to go to the scorecard at every fight,” Quigley said after the fight, “but, once I see a weakness and opportunity, I have to take him out.

“Boxing is one of those sports where there are no second chances. No do-overs. You just gotta take that chance. And, it’s a good feeling to know that you can take that chance over the course of a fight with one shot.”

“This fighter was a challenge for me mentally,” Delgado said after the bout. “He kept moving around too much and I was preparing for a brawler. I had to focus and not get frustrated. I am the happy I got the decision but I wish I would have gotten the knockdown.”

In the opening bout of the Golden Boy Promotions card, unbeaten welterweight prospect Zachary Ochoa received an eight-round education on ring savvy from cagey veteran David Rodela. The Brooklyn native outmaneuvered Rodela and landed the heavier shots en route to a unanimous decision by three scores of 79-73, but the Oxnard native didn’t make it easy.

Rodela (17-11-4, 7 KOs), a former junior lightweight who took the fight on three days notice, blocked a lot of Ochoa’s shots as he attempted to walk the younger and naturally bigger fighter down. Ochoa (12-0, 5 KOs) got off well in spots as he moved around the ring but he occasionally ate a flush hook or right hand from Rodela, who smacked his body whenever he backed to the ropes.