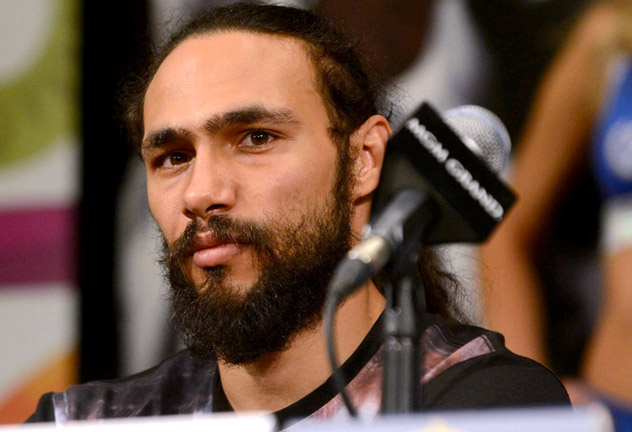 I know; I know. I know what Leonard Ellerbe has said but I’d like to humbly ask for a reconsideration here.

Keith Thurman is NOT in the running to be Floyd Mayweather Jr.’s opponent on Sept. 12 in Las Vegas, according to Mayweather aide EllerbeÔÇªbut I think he should be.

I’m thinking it makes sense to see how “One Time” looks because he might impress mightily and get fans salivating at the thought of a 26-year-old young gun, athletic and charismatic, challenging the 38-plus-year-old king of the boxing hill.

I touched on the issue with Thurman, a Florida resident who seems to be coming into his own as a sports-entertainer and whom in a manner, by the way, I enjoy. He’s well read, has varied interests, is extremely cerebralÔÇªoh, and he can throw down verbally, as well.

Such as when I asked him about Ellerbe telling ESPN’s Dan Rafael, “Keith Thurman is a very, very good young fighter who is extremely talented but he doesn’t understand how the game goes.”

Thurman took the ball, scampered, used his Heisman stiff-arm and muscled his way to the end zone of common sense. “It’s politics [Ellerbe] thinks I don’t know,” he told me. He said Team Mayweather and Ellerbe were trying to throw a curveball, inserting younger gun Errol Spence Jr. (ranked No. 8 by WBA) into the mix with Thurman, asserting that they don’t think Thurman could beat the ex-Olympian. “I’m a true contender in the welterweight division and there’s not a long list of fighters above me,” he continued. “I deserve to fight anybody ranked above me.” In the WBA rankings, that’s only MayweatherÔÇª

“Mayweather, Schmayweather,” Thurman said, hitting his verbal stride. “He’s made tons of money, has tons of records and he doesn’t need me if he doesn’t want me. But I please the fans. He’s like a pop star, a rock star, all his money, his cars, his hoes, I suppose. TBE, huh? He didn’t fight some of those guys at the right time. He didn’t do it for the fans. He waited a long time for Manny Pacquiao, for Pacquiao’s marquee value to go up and down. I’m 26, at the forefront of boxing, this is the second of two networks I’m headlining a card for, for PBC. I’m going to be here possibly for the next six to 10 years, have a healthy, beautiful career, with or without Mayweather.”

Me, I’m liking the idea of more and moreÔÇª

Thurman noted that Floyd has been choosing a certain sort of fighter, most times of late. Slower afoot, puncher types, mostly Latinos without the sort of foot movement that could potentially trouble him (it’s all “potentially,” mind you. I believe Mayweather is divinely blessed as a pugilist, especially in the defensive realm). “Floyd will fight punchers, Latino punchers,” Thurman declared. “They move right in with flat feet; they don’t have that ‘in and out ability,’ the ability to counterpunch. I can be just as evasive and as aggressive as him!”

Thurman felt as many, if not most of us, did, that #MayPac under-delivered, didn’t provide bang for the buck. “The fight was way too big for the fans to see that kind of performance!” Floyd’s lack of concerted aggression is not what fans want, he noted. He said there is a definite appetite to see Mayweather challenged and no shortage of folks want to see him lose – and even stopped. Yep, Thurman’s the man to do that job; he volunteered to me. “That would please the American people!”

Thurman isn’t holding his breath, won’t turn blue waiting; a movement is afoot to match him and Amir Khan, should he get past Collazo. That is a compelling fight, no doubt…

“Mayweather will control his career’s final stretch, will do what makes sense to him. I do understand him wanting to go according to his own plan. But he’s never cared about the fans. Since he nicknamed himself “Money,” it’s the only topic he’s cared about,” Thurman said. “Yeah, he’s good at making it but you really want to stir things up? Tweet out the hashtag, “#BoycottMayweather.”

“I say, ‘Free boxing for all; watch “One Time” all the time!

“Floyd is not entertaining anyways! I mean, it’s educational watching him fight.”

Solid stuff from Thurman there, stating his case, boldly, with respectable deference but purely reality-based.

We hear Floyd will decide his foe within two weeks – if Thurman wins conclusively and in entertaining fashion on Saturday night on ESPN, should he not be in the mix to meet Floyd in September?