Wladimir Klitschko and Tyson Fury will fight Oct. 24 in Germany 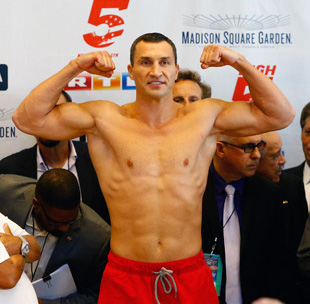 Wladimir Klitschko will defend his RING, IBF, WBA and WBO heavyweight titles against Tyson Fury on Oct. 24 in Dusseldorf, Germany.

The fight was scheduled to go to purse bids on Tuesday but a last minute deal was struck on Monday for this eagerly anticipated collision, which will feature more than 500 pounds of heavyweight.

“We’ve avoided purse bids and settled on a private agreement so both fighters are very happy,” said the challenger’s trainer and uncle, Peter Fury. “We never lost hope that this fight would be made and it’s time to go to work.”

There were rumors that the fight could land on U.K. soil but Team Fury insists that the location is irrelevant.

“Tyson would fight on the moon if he had to,” Peter Fury said. “We’re really not bothered because a square ring is a square ring and there’s only going to be Wlad and Tyson in there. We’re delighted and it doesn’t matter where the fight is.”

Peter Fury said the unbeaten challenger, rated No. 3 by THE RING at heavyweight, will back up his boasts when it matters most.

“One hundred percent,” he said. “This won’t be David Haye prancing around the ring; this will be Tyson Fury going for the knockout.”