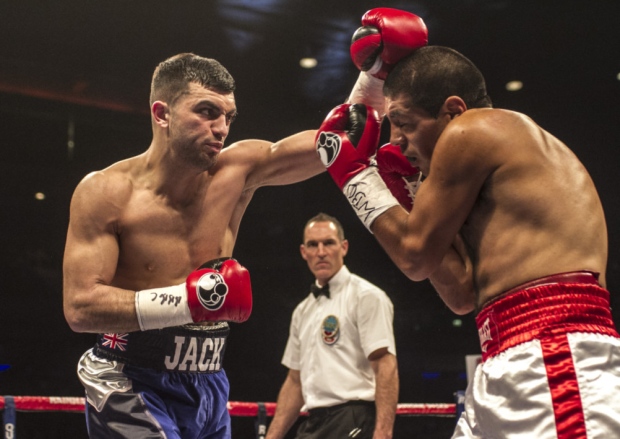 Jack Catterall (left) squares off against Cesar David Inalef in March of 2015. Photo by Karen Priestley

JACK CATTERALL
Vital Statistics:
Age: 22
Hometown: Chorley, England
Weight class: Junior welterweight
Height: 5-foot-8 (172 cm)
Amateur record: 48-18
Turned pro: 2012
Pro record: 11-0, 7 knockouts
Trainers: Lee Beard, John Costello
Manager: Lee Beard
Promoter: Queensbury Promotions
Twitter: @jack_catt93
Best night of pro career: Catterall has been matched tough from the begining of his career. Last summer, he took on unbeaten Nathan Brough and made quite a statement taking out the Liverpudlian fighter early. He parlayed that into an equally impressive display, beating British Olympian Tom Stalker in his following bout.
“I look at the Nathan [Brough] as the tougher fight,” Catterall told RingTV.com. “I did look at the Nathan and Tom [Stalker] fights before they happened and I did think Nathan was the bigger job really. So managing to get him out in the second round was the bigger achievement for me.
“Obviously [Tom Stalker] was a standout amateur, getting a win over him for a good ranked title was a massive catapult for me.”
Worst night of pro career: The recently turned 22-year-old southpaw is very analytical of his own performances. He’s never quite happy with any of his fights.
“More or less every fight, really,” he explained. “I always look back on the fights and I’m never fully satisfied. I know I managed to come through them all and win but every fight I look back on I’m always picking them apart thinking of things I could have done.
“There’s not one fight in particular where I really thought, ‘That’s bad.’ But nine times out of 10, I think, ‘I could have done this; I could have done that.'”

Next fight: He faces Gabriel Calfin of Argentina on Saturday in Manchester as chief support to Terry Flanagan and Jose Zepeda who meet for the vacant WBO lightweight title.
“Calfin is another challenger that I have to deal with efficiently as I continue on the path towards the world title,” he said. “It’s important to me that I put on a good performance against him and show my talent and potential as a future world champion so I know that I can’t slip up against him.”
The 31-year-old southpaw fights outside Argentina for the first time in 31 outings, going 22-6-3, 8 KOs. “Chilo” hails from San Antonio Oeste, Rio Negro, a thousand kilometers south of the capital, Buenos Aires.
Why he’s a prospect: Catterall wasn’t a big amateur; he never took the sport seriously until after he finished college and dedicated himself 100 percent to his craft. He still represented England against Poland and was selected to fight against Isle of Man. He also won a youth title and reached the final of the Junior ABAs.

Earlier this year, he traveled to America for six weeks for high-level sparring with Floyd Mayweather Jr. and Canelo Alvarez.

“Sparring against the world’s top fighters was the best experience that I could have had at this stage of my career,” he said. “It was like a university degree crammed into six weeks but what I got back is experience that, for a young fighter, you just can’t buy. It’s a massive boost to my confidence.”

Catterall spent a month in Las Vegas with Mayweather sparring twice a week, getting the pound-for-pound king ready for Manny Pacquiao: “Floyd is the greatest fighter of the modern era and it was an honor to share a ring with him. He’s a wizard in terms of defense and to get near him was very hard but I learnt plenty from him.”

He then headed to San Diego for two weeks with Canelo, doing three spars a week, four, four-minute rounds at a time.

“It was totally different sparring with Alvarez,” he continued. “He’s a really top guy and very respectful but, inside the ring, he’s a powerful fighter with a great offense and defense. Against Alvarez, I could retain my own style, which suited me more and we had some great spars.”

Catterall has several strengths but he says of his best trait, “I try to get in the ring each day with Lee [Beard] and practice things and I’m able to adapt to whatever the opponent brings.”

Why he’s a suspect: It’s still early days in the youngster’s career; he’s beaten the usual suspects in the UK and is now honing his skills against foreign imports.

Catterall has shown his strength as he’s been able to bully older fighters and get impressive stoppages over Brough and Stalker. It remains to be seen how he handles someone with speed and who gives him movement.

In many ways, he’s been able to make up for his lack of amateur experience with high-class sparring. He’s also benefited from the tough love approach of Beard and Frank Warren.

“That’s what was explained to me early on,” he said. “I don’t think it happens all that much anymore. You get built up to 25-0 and found out. Frank said, “The opportunities are going to be there and you have to come through them to push forward.”

Catterall is keen to focus on the here and now and not trying not to look too far forward.

“I take each fight as it comes; I believe every training camp I’m learning more,” he said. “There are certain things I need to brush up on. As long as I feel I’m learning all the time, that’s all I can do.”

Story lines: Catterall grew up in Chorley, less than an hour drive from Manchester. He comes from a big family and is one of nine children – he has seven brothers and one sister.

He went to the gym when he was 10 and had his first fight when he turned 11.

Although he enjoyed boxing. it wasn’t exactly his passion, “Every season, I always had fights but being at school, college and having other things going on it was never the main focus.”

He passed a public services course in college and had aspirations of either becoming a fireman or joining the Army. However, he got an unexpected opportunity that set him on a different path.

“I spent some time with Lee in between leaving college and finding work,” he said. “We were training and I was enjoying it more and then the opportunity came along where Mendez was fighting [for the world title], so he flew me over there and spent a good couple of weeks over there.

“As we were out there, he managed to organize my debut back at home and it was something to work towards and we’ve never looked back, really.”