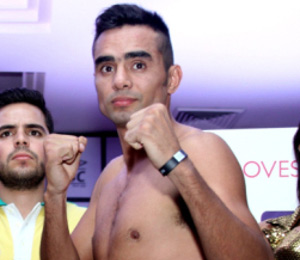 LOS ANGELES — The main event to this month’s LA Fight Club didn’t last long but it served enough action and drama to give the fans inside of the Belasco Theater and those watching on Fox Deportes a show.

Gilberto Gonzalez, a 27-year-old lightweight fringe contender from Mexico City, battled back from a wobbly moment and an injured knee to stop game Hevinson Herrera in Round 3 of a scheduled 10-round headliner.

Gonzalez (26-3, 21 knockouts) utilized his height and reach advantage in taking the first round the first with one-two combinations landed from the right- and left-handed stance. However, the rangy boxer-puncher was clipped with a huge overhand right that staggered him into the ropes midway through Round 2. Herrera (17-11-1, 11 KOs), a 30-year-old journeyman from Miami by way of Colombia, tried his best to capitalize on the moment, pouncing on his staggered foe and teeing off with uppercuts, hooks and crosses, but Gonzalez covered up until his head cleared and fired back with gusto. Before the end of the round Gonzalez backed Herrera to the ropes and rocked the Colombian with a short right cross. Gonzalez heaped his share of punishment on the journeyman before the bell.

In Round 3, Gonzalez took the fight to Herrera in hopes of finishing his opponent off but he missed with a body shot and fell into Herrera’s corner, perhaps spraining or hyper-extending his right knee. He spat his mouthpiece out and hobbled back to his corner but opted to continue rather than have the bout end as a No Contest. Stalking out of the southpaw stance, visibly in pain, Gonzalez back walked Herrera into the ropes near a neutral corner and unleased a series of hooks and crosses that landed flush on the Colombian’s jaw, causing the journeyman’s legs to buckle and referee Wayne Hedgepeth to step in and wave the fight off at 1:49 of the round.

In the co-featured bout of the card, featherweight prospect Diego De La Hoya stopped Jose Estrella in Round four of their scheduled eight rounder. De La Hoya (11-0, 7 KOs) was in control from start to finish, stunning Estrella with stiff jabs, accurate hooks and uppercuts and hard body shots. In Round 4 an overhand right found its mark and almost sent Estrella (14-7-1, 10 KOs), a capable 22 year old from Tijuana, through the ropes. Estrella got up on wobbly legs and was quickly overwhelmed by the 20-year-old native Mexicali, Mexico.

In the opening bout of the Fox Deportes broadcast, former Colombian amateur standout Oscar Negrete outworked and outboxed the always game Ramiro Robles to a unanimous decision in an eight-round featherweight bout. Negrete (11-0, 3 KOs), a 27-year-old boxer who is now based in L.A., won by scores of 80-72 and 79-73 (twice). Robles, a 22-year-old native of Guanajuato, Mexico who has lost his last three bouts (to unbeaten prospects Negrete, De La Hoya and Joseph Diaz Jr.) falls to 12-4-1, 6 KOs.