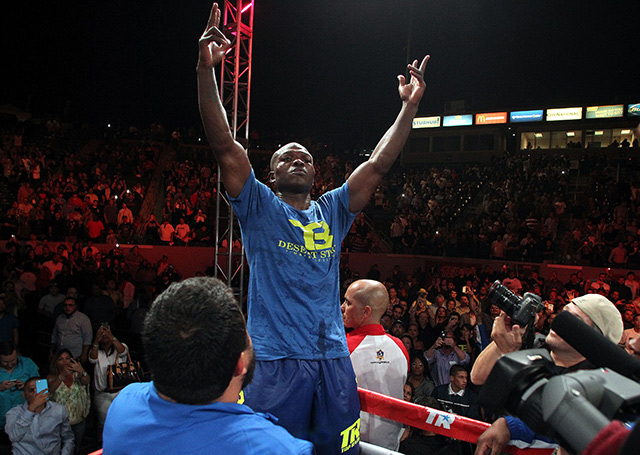 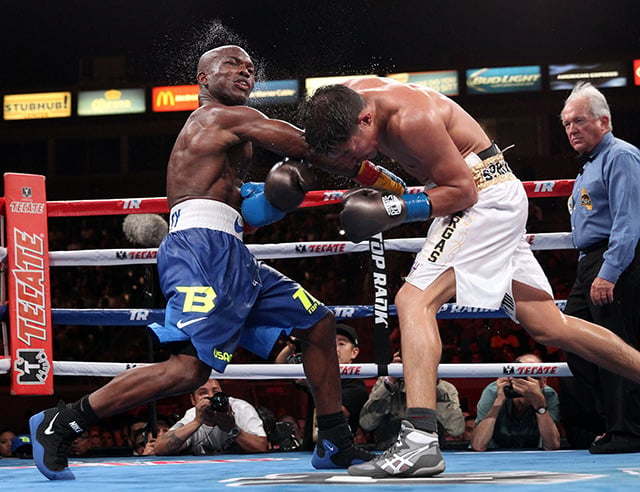 Jessie Vargas connects with a right that almost dropped Tim Bradley in the final seconds of Round 12. Bradley won a unanimous decision. Photo by Chris Farina / Top Rank

Tim Bradley showed us all of the things that make him an elite fighter as well as a fan favorite with his unanimous decision victory over Jessie Vargas on Saturday.

The 31-year-old veteran was skillful, athletic, aggressive, gutsy and, at times, vulnerable. Bradley (32-1-1, 12 knockouts) took control of the fight in Round 3 with effective forward-matching aggression, smashing overhand rights and eye-catching flurries to the body when in close. Vargas (26-1, 9 KOs) fought well while backing up, often landing his jab and select counterpunches, but didn’t do enough damage to earn many rounds — until the final 15 seconds of the bout when the 26-year-old Las Vegas resident cracked Bradley with a monstrous right hand that nearly toppled the two-division titleholder. Bradley was out on his feet, reeling and in survival mode as Vargas tried to land follow-up shots but referee Pat Russell waved the fight off with 10 seconds still to go in the round.

Fans at StubHub Center in Carson, California, and those watching the live HBO broadcast, exploded in outrage, thinking the veteran official prematurely stopped the fight. However, Russell thought that he had heard the final bell when in fact he reacted to the 10-second warning clap from ringside. Russell admitted his mistake to the commissioners, who made the decision to go to the scorecards where Bradley won by tallies of 117-111, 116-112, 115-112.

So Bradley rebounded from a winless 2014, which included a rematch decision loss to Manny Pacquiao and a highly disputed draw to Diego Chaves, by outboxing, outworking and outclassing a game young contender, but once again he does so with controversy.

“It was over,” Vargas said during his post-fight interview on HBO. “He was out. All I needed was one shot and that’s what I was looking for. It was an honest mistake on the referee’s part but those 10 seconds possibly cost me the fight.”

Most observers familiar with Bradley would disagree with Vargas. For all of his skill and athleticism, it’s Bradley’s fighting heart that makes him special and respected within the boxing community. He proved his inhuman resiliency with his bold stand against murderous punching pressure fighter Ruslan Provodnikov in 2013, the Fight of the Year which took place in the same ring and venue. But the humble Palms Springs resident admitted that he was hurt by Vargas’ near-Hail Mary punch.

“He caught me with a perfect shot but I wasn’t going nowhere,” Bradley said during his post-fight interview. “I knew where I was, I grabbed ahold of him. I know what I’m doing in there. I survived Provodnikov, come on.

“I was winning the fight easily but I got lazy and careless and I got caught.”

That end-of-the-fight carelessness, and the occasional reckless attacks that allowed Vargas to counterpunch him in spots, will probably keep Bradley from regaining his once lofty status on boxing’s mythical pound-for-pound ratings (he was once ranked as high as No. 3). However, it is also the reason fans continue to tune in when Bradley fights. He’s talented but he isn’t perfect. He’s strong and gutsy but he isn’t invincible. And when he’s in with a worthy opponent, as Vargas proved to be, Bradley usually delivers the kind of high drama that only professional boxing can deliver.