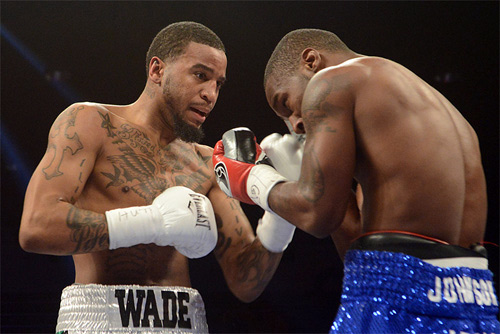 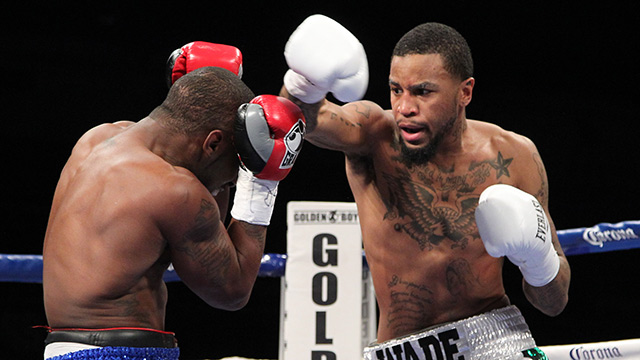 It marks a significant step-up for Wade (17-0, 12 knockouts) and he intends to make the most of his opportunity.

“Yes I do,” Wade told RingTV.com when asked if this is his chance to serve notice to the middleweight division. “I’m willing to get in the ring with pretty much anyone at the right time. I’m gonna say I’m on the same level as everybody else. [I want] bigger opponents and more experienced opponents.”

Soliman certainly ticks those boxes. The 41-year-old Australian veteran turned pro in 1997 and will be engaging in his 58th professional bout (with a very respectable 44-12 record with 18 stoppages). He’s only been stopped once in his career and is one fight removed from winning the IBF crown – outpointing Felix Sturm in Germany. He lost the belt in his first defense vs. Jermain Taylor in his most recent fight last October, although was badly hampered by an injured leg.

TGB Promotions show is a tripleheader. Along with the Wade-Soliman main event, the card will feature highly touted junior middleweight Erickson Lubin and Olympian Jamal Herring.

RingTV.com – What are your thoughts on facing Soliman?

Dominic Wade – I’m ready for it. I trained hard for it. My thoughts on it are that he’s very experienced, so I’m pleased to get in the ring with him. I’m ready for the chance and the challenge.

RTV – When you look at Soliman what do you see in terms of strengths and areas you feel you can take advantage of?

DW – I think his experience he brings to the fight. Honestly, it’s not anything I’ve not seen before. I’m going to say his experience; he’s done more rounds in the pros than I’ve done. His weakness, I’d say is his balance, that’s about it.

RTV – You’ve been a pro since early 2009 but you’ve had spells of inactivity. How come it’s taken you this long to reach this level?

DW – That’s because I had a set-back due to promotional stuff and other things that were kind of behind the scenes. That kind of held me back but I’m back on track now.

RTV – For people who don’t know you, tell them about your career so far.

Came to the pros, made my pro debut, stopped the guy in 28 seconds of the first round. I had a knockout streak that made a big bang and a big noise. Then I had a setback and signed with Al [Haymon] and I been doing pretty good ever since then. I’m on a roll right now.

RTV – Tell us about your team and your training camp?

DW – My team, I’ve been working with my trainer Jay Spencil and Kevin Smalls and Mike Rodriguez. I think we had a great camp. We have a great team. When I was like, ‘Oh man’ they pushed me through, made me do it anyway, they talk to me. We pretty much get through the training and whatever I need to get through. I’ve trained at home in [Washington] D.C. I’ve been training for this fight for about 7, 8 weeks. Good training and sparring, I actually went up to Philly to spar and get some rounds in with Julian Williams and a couple other people, so camp’s been pretty good.

RTV – You’re from Largo, Maryland, tell us about your youth? How did you become interested in boxing?

DW – When I first got into boxing I was maybe 9 years old coming into the gym. It started because I used to go out with my brother, I used to go outside and hang around older kids. I would be around the neighborhood playing all the time, the next thing somebody would come up to my father, ‘Oh Dominic, he’s in the street fighting’. I’d always been fighting, so one day he took me to Adrian Davis’ gym, it was Round One at the time. He made me get in there and spar a kid, when I got in the ring they thought it was going to teach me a lesson but I did good. I got in the ring, I dropped the kid but I was always a street fighter, I didn’t know anything about boxing so I kept hitting the kid on the ground when I dropped him. Adrian Davis jumped in the ring and said, ‘Oh, you can’t do that, it’s against the rules’ he sat down and told me the rules and I started watching boxing because I went to the gym and that’s when I saw Floyd Mayweather and I was like ‘I don’t want to fight on the streets no more, I want to fight on TV.’ So now I’m fighting on TV and it feels good.

It was pretty tough growing up. [Largo] is probably 10 minutes from D.C. At the time I started boxing I was actually living in D.C. I wasn’t living in Largo. I moved to Largo when I was 16, 17 years old. That’s when everything picked up.

RTV – You had a very good amateur career. Tell us about it?

DW – [My] amateur record, I’m gonna say 167 and I lost maybe about 9 or 10 bouts. I won Silver Gloves five times, Golden Gloves. I actually hold the record with [Oscar] De La Hoya, winning the Silver Gloves the same amount of times. I got in the Junior Olympics, I got a silver medal one year. I won quite a lot of tournaments. I got into the Olympic trials, I fought Shawn Porter, they made me lose by disqualification, but actually I was winning the fight on the scorecards, it was the last round, I think I had about 20 seconds left, I was up on points, they disqualified me, said I was holding. I once fought Danny Jacobs, I lost to him on points. I beat Edwin Rodriguez, Fernando Guerrero, all those guys.

RTV – The middleweight division is thriving at the moment. What are your thoughts on the division and current champions?

DW – I think the division has a lot of top dudes in it. I think everybody is trying to push and prove a point and make a statement on who is the best

DW – Right now since I’m in this division I’m gonna say I’m the best. I’m trying to prove that statement like everybody else.

RTV – What do you think of the current champions?

RTV – I’m sure you’re not looking past this fight but is there a target?

DW – UmmÔÇªI’ve got to talk to Al, after that it’s pretty much whoever, I think this is the step-up, I’ve just got to wait and see who they move in front of me next.

RTV – But you must have somebody you’d like to fight?

DW – Honestly, it doesn’t really matter. It’s whoever they put in front of me, I don’t have set names.

RTV – You don’t look at for instance Peter Quillin or Daniel Jacobs and think, ‘I’d like to fight them at Barclays Center?’

DW – I’d like to fight all of them honestly.

DW – Taking trips, hanging out with friends and family, not doing to much. Hop in the pool, just chill and relax.

RTV – In closing do you have a message for Soliman ahead of your fight?