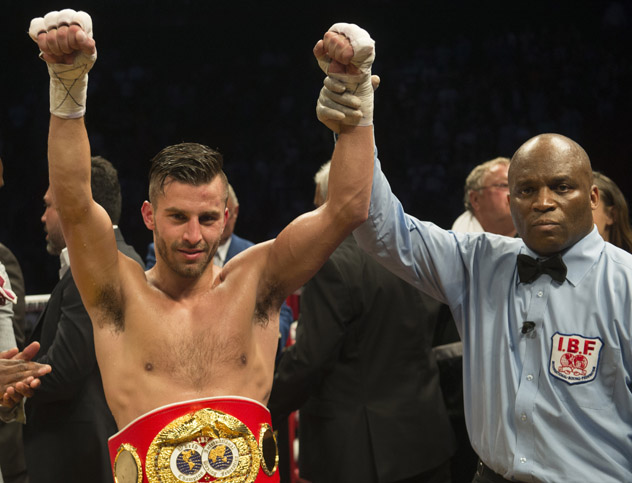 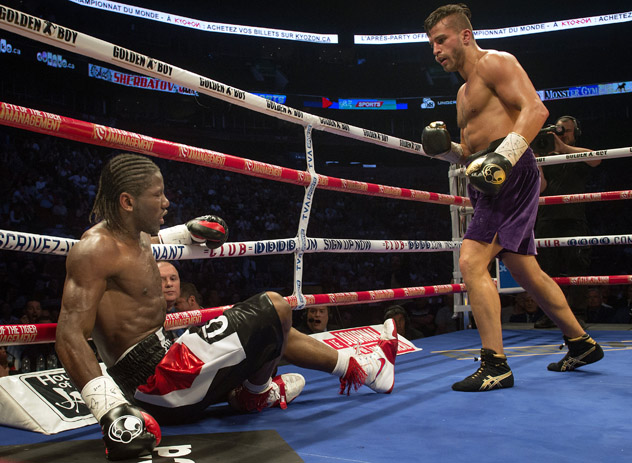 David Lemieux: I don’t think Lemieux can beat Gennady Golovkin, a potential opponent in the near future. I doubt he could beat Canelo Alvarez, another possible foe, either. I can say this without hesitation, though: I never, ever want to miss a single second of his professional career. Lemieux might be the greatest boxing show on earth in terms of pure entertainment value, a throwback banger who tries to maim you with every punch and often does. Hassan N’Dam learned that on Saturday in Lemieux’s hometown of Montreal. Lemieux emerged from his corner to start the fight with one goal in mind: Remove N’Dam’s head from his body. And he almost did it, putting the Cameroonian down four times with crushing lefts to the face en route to a unanimous-decision victory that gave him the vacant IBF middleweight title. N’Dam survived because he has superhuman recuperative powers and had his moments but that only made the fight more exciting, which certainly didn’t hurt Lemieux. I don’t know if a star was born. I do know that the French-Canadian is everything fans love: a fearless heat-seeking missile who makes it impossible to look away. The fans at Bell Centre who went nuts during the fight would attest to that.

Shawn Porter: Porter wasn’t just the hero – to Broner’s villain – in the real life melodrama that climaxed Saturday night at the MGM Grand in Las Vegas. He was also the much better fighter. The former welterweight titleholder’s reputation took a significant hit when he lost a onesided fight and his IBF 147-pound title to talented sharpshooter Kell Brook last August in Carson, California. He regained a lot of ground Saturday by outclassing Broner, who was outboxed and very clearly outworked by a better all-around fighter. Porter (26-1, 16 KOs) went down and might’ve been stunned from a perfect left hook in the final round but it meant nothing. He was in complete control otherwise, giving him a unanimous-decision victory that puts him in the thick of the lucrative welterweight picture. That includes landing him on the short list to fight Floyd Mayweather Jr. in September, which is the ultimate reward because of the money involved even if his chances of winning would be slim. And let’s not forget about our melodrama, a genre of theater in which the audience generally cheers the hero and boos the villain (the latter of which actually happened on Saturday night). Porter earned the cheers with an outstanding performance. The good guy won.

Adrien Broner: I think fans get Broner now. Big mouth, too little to back it up against the highest level of competition. Broner is athletic and quick. A fighter is more than that, though. A fighter is tough, resilient, determined. He finds it within him to overcome adversity. And, for God’s sake, he throws enough punches to give himself a chance to win fights. Broner (30-2, 22 KOs) demonstrated none of that against Porter. Instead, whenever Porter got close, he held on for dear life as if he were afraid to absorb the kind of beating he took against Marcos Maidana in his only other loss. That’s not a fighter. Get this: Broner landed only 88 total punches, according to punch statistics. That’s an average of 7.3 a round. I don’t know how to explain that given Broner’s physical gifts and the magnitude of the fight. How could he have expected to win with such inactivity? Overall, Broner’s performance – his effort – was weak. I believe he is what they call a “front runner,” someone who succeeds when things go well – as they did in his title fights against lesser foes – but struggles when they don’t. He struggled against Maidana; he struggled against Porter. Where does that leave him? He’ll continue to get big fights, at least for now. The fans just won’t look at him the way they used to.

Andre Ward: Welcome back, Andre. I won’t be critical of his choice of opponents Saturday in his hometown of Oakland, California, a so-so contender named Paul Smith who lost two onesided fights to a boxer Ward destroyed, Arthur Abraham. After all, the former RING super middleweight champ hadn’t fought since he outpointed Edwin Rodriguez in November 2013 because of contractual issues with his former promoter. He deserved an easy mark for his comeback fight. Ward (28-0, 15 KOs) looked as if he hadn’t been away for a single day. The 2004 Olympic gold medalist picked Smith apart with every weapon in his arsenal until Smith’s face was covered in blood and he could take no more, prompting his corner to throw in the towel 1:45 into the ninth round of the light heavyweight bout. Ward won every round. Again, the victory doesn’t mean much. The fact Ward is back does, though. One could’ve argued before his hiatus that he was the best fighter in the world pound for pound, or at least close. There is no reason to think anything has changed. Ward is still young, 31, and undoubtedly fresh after his layoff. What’s next? The super middleweight division isn’t strong, although fights against James DeGale, George Groves or Gilberto Ramirez would be interesting. If he goes up to 175, the likes of Sergey Kovalev and Adonis Stevenson await. Should be interesting.

Ward had the support of the No. 1 Bay Area hero at the moment, Stephen Curry, who carried Ward’s title belt into the ring. Curry seemed to be very pleased after the stoppage. Doesn’t get bigger than that. N’Dam (31-2, 18 KOs) lost a fight but earned accolades. That’s what happens when a boxer displays uncommon courage and resilience. (Are you listening, Adrien?) N’Dam has a history of hitting the canvas. He did it six – yes, six – times against Peter Quillin but kept getting back up to give Quillin all he could handle. That’s what he did against Lemieux. He not only got back to his feet every time he went down but outboxed Lemieux when he was upright, including a strong final few rounds. He lost badly on all three cards because of the knockdowns but won five rounds on two cards and six on the third. That’s a productive night. Errol Spence Jr. (17-0, 14 KOs) stopped late replacement Phil Lo Greco (26-2, 14 KOs) in the third round on the Porter-Broner card. Loved what I saw. The former Olympian appears to have it all, including an appealing fighting spirit. Let’s not read anything into that fight, though. Lo Greco wasn’t a serious test. One of those will come soon. And I feel sorry for whomever that opponent turns out to be. Dierry Jean (29-1, 20 KOs) turned in another very good performance, easily outpointing Jerry Belmontes in a 10-round lightweight bout on the Lemieux-N’Dam card. That’s four consecutive victories since he was outpointed by Lamont Peterson. Jean is one to keep an eye on. Rances Barthelemy (23-0, 13 KOs) looked good and strong at 140 pounds, at which he easily outpointed Antonio DeMarco (31-5-1, 23 KOs) on Sunday in Las Vegas. That’s two weight classes above junior lightweight, where he had been fighting. I think the tall Cuban can give anyone trouble at 140 pounds.