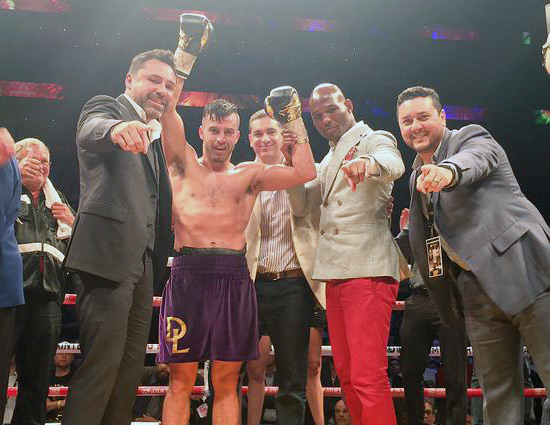 MONTREAL – David Lemieux might have knocked any other human being out with the shots he landed Saturday night, but not Hassan N’Dam.

The Canadian crowd favorite turned in another scintillating performance, and the French challenger, another heroic one. The highlight packages will illustrate a completely dominant outing for Lemieux, but a closer look at the scorecards 115-109 (twice) and 114-110 paint a different picture.

It seems silly to say, but aside from the knockdowns, N’Dam was in this fight the whole way.

Lemieux started the knockdown parade in the second round with a left hand that nearly sent N’Dam through the ropes. Another two left hooks produced a pair of knockdowns in Round 5, and a counter left hook did the job in the seventh.

“I don’t know how he kept getting up,” said Lemieux. “It was like, what’s wrong with you?”

The Montreal product applied pressure all night long, but in the moments when he wasn’t off his feet, N’Dam used them to keep a healthy distance and pot shot with a looping right hand.

“I can get him a few wins,” said Oscar De La Hoya of N’Dam, whom he has approached about promoting from here on. “He would have beaten any other middleweight tonight. He deserves a shot at another world title.”

De La Hoya also specifically mentioned the possibility of a showdown between Lemieux and Gennady Golovkin in the near future, though with the caveat that a title defense may come before that fight materializes.

In the opening bout of the international broadcast, fringe super middleweight contender Schiller Hyppolite earned a tougher than expected decision victory over Kevin Cojean. Scores were 98-92 and 97-93 (twice).

Hyppolite, an athletic boxer who has crept into the top 15 of some sanctioning bodies at 168, comprehensively outboxed Cojean for the first half of the fight. “Batman” used his good set of legs, a snappy jab and a quick uppercut on the inside to mostly neutralize Cojean.

However, Cojean started to find Hyppolite in the sixth round, landing a pair of hard counter rights, one of which drew blood from Schiller’s lip.

In Round 8, the Frenchman briefly wobbled Hyppolite with a lead right hand, and started to gain control of the bout. The following round, he appeared to have Hyppolite hurt along the ropes on several occasions, and the crowd at the Bell Centre began rooting for him over their provincial favorite.

Hyppolite stood in front of Cojean for the majority of the final round and slugged it out, perhaps winning back some of his supporters.

“You certainly don’t like watching this kind of fight when you’re in the corner as it’s going on, but it’s the kind of fight he needed before he takes that next step,” said Hyppolite’s trainer Jean-Francois Bergeron.

With the win, the 29 year old earns the WBC Francophone super middleweight title, which previously did not exist whatsoever.

A huge overhand right from Jean at the end of the second round caused Belmontes’ glove to touch the canvas for a knockdown. Beyond that however, it was mostly one-way traffic with Jean loading up on big combinations, and Belmontes escaping to reset.

The larger victory for Jean has been in his life overall. Following his 2014 loss to Lamont Peterson, Jean spiralled into alcoholism and excessive gambling. The 33 year old entered rehabilitation with the assistance of his manager Camille Estephan, and has remained sober ever since.