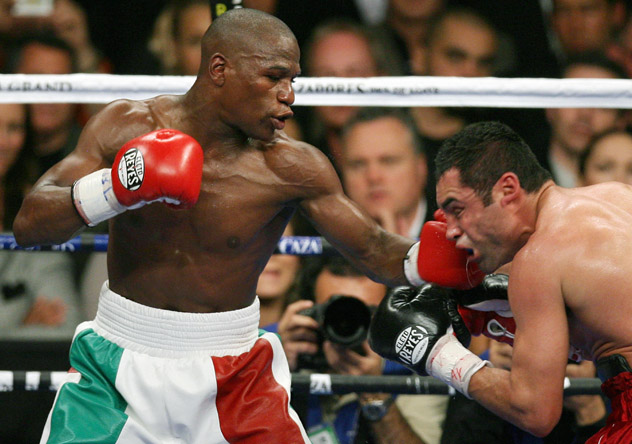 I have to think his eyes lit up when he got wind of the news.
The most popular boxer of the previous era wants to fight meÔÇªand dude hasn’t fought since 2008ÔÇªand is 43-in-February-years-old, and has been doing the business-side thing for the last few yearsÔÇªyeah, sign me up for that.

LOVE that risk/reward ratioÔÇªthat’s how I picture Floyd Mayweather Jr. reacting when he saw that TMZ video of Oscar De La Hoya NOT shutting the door on coming back to the ring to box.

The two tangled before, in 2007, and it was a decent fight, pretty close, and from the most important perspective, in the minds of the suits, it was VERY compelling. Yep, Mayweather vs. De La Hoya I (and done, LOL) made oodles of money (grossed $130 million). It would have made sense to do it again, as 1) it made oddness of money the first time and 2) since Oscar had some good luck in the first one – he lost by 12-round split decision – the rematch could be sold to the public.

But it didn’t happenÔÇªand here’s a video snippet which helps explain why, from Oscars’ perspective.

“So I hear Floyd wants to give me a rematch now,” the boss of Golden Boy Promotions said. “Our first fight had a rematch clause; it had to take place within the year. He retired for a year and one day. Look, I’m retired. I’m happy. I’m content. I’m never coming back. I’m going to continue growing Golden Boy.”

So there you have it. Door closed by Oscar, hard. Conclusively. NEVER, he said. Eventually, we will stop asking. But man, an Oscar comeback would have been a delightful proposition to Floyd, I think. Fabulous risk/reward, right?

Now, this question begs to be askedÔÇªWhy did Floyd seemingly dodge that rematch? Was there personal bad blood? Or was he spooked by Oscar having some luck against him and didn’t want to tempt fate? What do you think, readers?