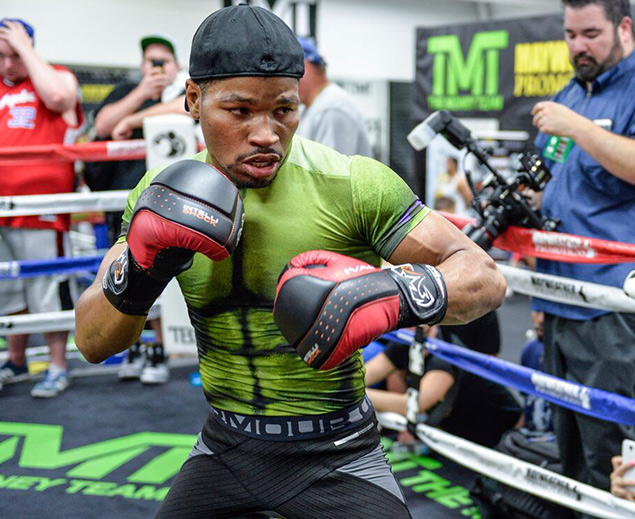 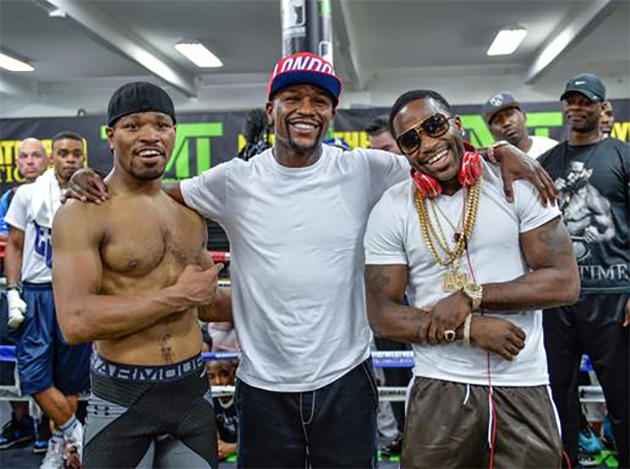 Shawn Porter isn’t receiving the support that Floyd Mayweather Jr. has given Adrien Broner going into “The Battle for Ohio” but he’s confident that he knows how to beat his fellow Ohioan. Photo by Idris Erba/Mayweather Promotions

For Shawn Porter, his showdown with Adrien Broner on Saturday at the MGM Grand Garden in Las Vegas should give him home-field advantage considering that he now resides in Entertainment Capital of the World.

However, as the days inch closer to the “PBC on NBC” showdown that has been dubbed “The Battle For Ohio,” it appears that Porter may be more of an outsider. He’s already the B-side of a fascinating clash of styles where Broner holds a slight edge with the odds makers at a +100. And in order to land the fight, Porter had to agree to face “The Problem” at a catch weight of 144 pounds. Although he seems completely unfazed by how the concessions have gone to his opponent, the fact of the matter is that Broner has planted his flag and it is up to Porter to usurp him from power.

Take, for instance, Wednesday’s open workout that took place at the Mayweather Boxing Club. The surprising presence of Floyd Mayweather Jr. – who was there to help promote his boys Adrien Broner and Errol Spence Jr. – shifted the dynamic at the gym. While Porter worked out, a vast majority of the media was locked in a private room with Mayweather as the undefeated fighter waxed poetic about Saturday’s fight and all things “Money” related. By the time Mayweather was finished, Porter’s workout was wrapping up. And that’s when Broner arrived and immediately set foot in the ring in an effort to try and intimidate his opponent.

Words were exchanged, although nothing substantially volatile, and Broner proceeded to hold court in the ring that Porter was working out in while Mayweather and Spence also climbed between the ropes and took photos. Instead of trying to hold his ground, Porter simply left the ring. His father and trainer, Kenny, didn’t exactly depart quietly.

“Don’t worry about him because all he does is talk,” the elder Porter said while Broner mugged for the cameras. “He knows what he has to deal with come Saturday night.”

The 27-year-old contender, who told RingTV.com that he won’t indulge in trash talking with Broner, joined in on the photo opportunity with Mayweather and Broner and silently departed.

“He’s a talker who likes to run his mouth but it’s all good,” the former IBF welterweight champion said to a small group of media afterward. “We’re just going to do our thing on Saturday night.”

Regardless of how much he has conceded to Broner, Porter exudes confidence coming into this fight. Although he doesn’t say much about it, he and Broner have a relationship that dates back to their amateur days in Ohio with Broner being from Cincinnati and Porter not to far away in Akron. That relationship is the reason why Broner has toned his shtick down a bit. According to Kenny Porter, Broner has remained relatively humble for a reason.

“Everything that people don’t know about Broner is going to come to light,” Kenny Porter said in a recent interview with Sway in the Morning. “He was Shawn’s sparring partnerÔÇªI brought him in because we were fighting a runner at the time and we used him to run from us. It ended up with us having to release him and him saying ‘I’m sorry coach but Shawn is just too strong.'”

While it is common knowledge within boxing circles that the two sparred with one another, the outcome of those sessions remain shrouded in mystery. Broner has maintained in numerous interviews that he has had the upper hand. However, Porter simply smiles whenever those sessions are brought up. Clearly, he knows something that we don’t.

As Broner continued to parade around the ring while telling Porter he “better bring it” on Saturday night, “Showtime” simply stared at him and shook his head.

It may not be on his terms or with the #1 pound for pound boxer in the world singing his praises, but Shawn Porter is ready on June 20 to finally prove to the world something that he has known all along.

That he can and will beat Adrien Broner.