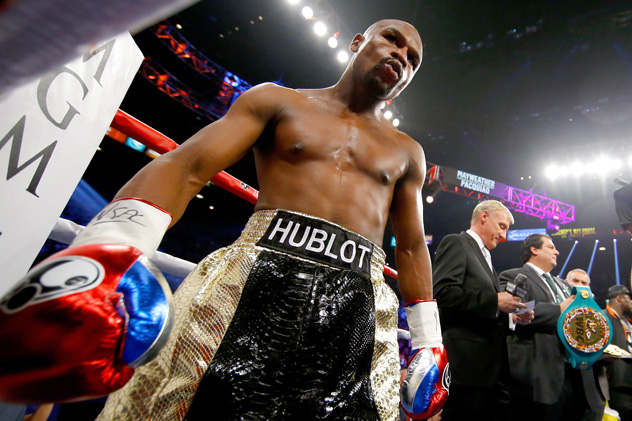 When Floyd Mayweather Jr. arrived at the Mayweather Boxing Club on Wednesday afternoon, there was clearly something different about him.

Maybe it was the $275 million that he raked in after soundly beating Manny Pacquiao in their record-breaking fight last month. But he had a little more pep in his step and it appeared that he finally got the monkey off of his back. After all, his presence during the media workouts for June 20’s “PBC on NBC” headliners Adrien Broner and Shawn Porter wasn’t necessarily expected. He must have been in a great mood in order to deal with a bevy of journalists who would undoubtedly lob questions about who will be the next competitor to hit the Mayweather Lottery.

Normally, Mayweather would respond with one of his canned answers that offer very little before he’d eventually become annoyed with the inquiries about his future. When we last saw him at the podium after defeating Manny Pacquiao, Mayweather was rather incensed that anybody would doubt him against the Filipino superstar.

But this day is different. And for whatever reason, the man who has anointed himself as “TBE” was there to talk and was far more open than usual.

Appearing relaxed, the pound-for-pound king of boxing slid into the gym at about 2:30 p.m. so he could get a look at Errol Spence Jr. before inviting select media into the Mayweather Boxing Club’s back room.

“I like being on this side,” Mayweather beamed. With the Pacquiao question answered and fighters from his promotion company competing this weekend, Mayweather threw on his promoter’s cap and talked about the futures of Badou Jack as well as the aforementioned Spence and Broner.

Eventually, it was asked whom Mayweather would fight next. Although Mayweather Promotions CEO Leonard Ellerbe tried to deflect, the Forbes highest-paid athlete for 2015 decided to engage in the conversation rather than shy away from it.

“I seen Oscar [De La Hoya] talking about coming back,” Mayweather said about the man he defeated in 2007 in a then-record-breaking showdown. De La Hoya has toyed with the idea of making a comeback despite being 42 years old and being demolished by Manny Pacquiao in his last fight. If it’s a money grab he wants, Mayweather will surely give it to him. “If he wants to, we can rock and roll in September and we can do it at 154. He knows how I operate.”

The room fell silent and some of the members of the media immediately took to social media to report on a possible Mayweather-De La Hoya sequel.

But, come on, are we really going to fall for that? Yes, some people actually did. Mayweather, who now had the room eating from the palm of his hand, continued his tongue-in-cheek performance.

“I think I’m going to choose who I want to choose for my September fight,” he said. “I think Andre Berto or maybe Karim Mayfield. I need to get ready for my 50th bout. Everybody says that they want to see that and Berto has been looking good as of late.”

If there was anyone who didn’t get it by now, Mayweather was simply having fun at the expense of some overeager journalists looking for their next headline. Mayweather did, however, address knockout artist Gennady Golovkin, who has been wrecking everything in his path and trying to bait Mayweather into a fight. TBE didn’t seem to be too impressed with “GGG.”

“I finally got a chance to see Gennady Golovkin,” Mayweather said after watching the Kazakh fighter’s six-round decimation of Willie Monroe Jr. last month. “Congratulations to him for everything he’s done but he cannot beat me.”

Although GGG has offered to come down to 154 to meet Mayweather in what would likely be a huge fight considering the tremendous momentum that Golovkin has developed with fight fans thanks to his fan-friendly style, “Money” just doesn’t seem interested in facing the boxer, who is currently riding a streak of 20 straight knockouts.

“He can punch but if I was working with [Monroe], he would have beaten him,” he continued. “I don’t take anything away from him because it’s obvious he’s doing something right. It would probably be a good fight for me but I’m almost finished with my career.”

The only thing that appears to be on Mayweather’s mind is his promotion company and the WBO welterweight title he won from Pacquiao but has yet to receive. As a matter of fact, it is the very world title that Jessie Vargas and Timothy Bradley will be battling for on June 27.

“I have belts that I would like to relinquish but I haven’t received my WBO belt,” Mayweather told RingTV when discussing wanting to see young fighters battle for the belts that he won. At the Mayweather-Pacquiao post-fight press conference, Mayweather said he was going to give up his world titles. However, he has yet to do so because he hasn’t put his hands on the WBO title. “Before I relinquish something, I have to receive it. I was on the podium and I said that I’d like to relinquish my belts but I can’t receive my WBO belt? How is somebody fighting for something I won but haven’t relinquished yet?”

Just about everything Mayweather said was with a smile. He’s living in the moment and basking in the windfall of money he just earned. But rest assured that when it is time for the business to be handled, his game face would be on. Until then, we’ll soak in the rare sight of a Mayweather who enjoyed his 45 minutes with the press because it won’t last forever.