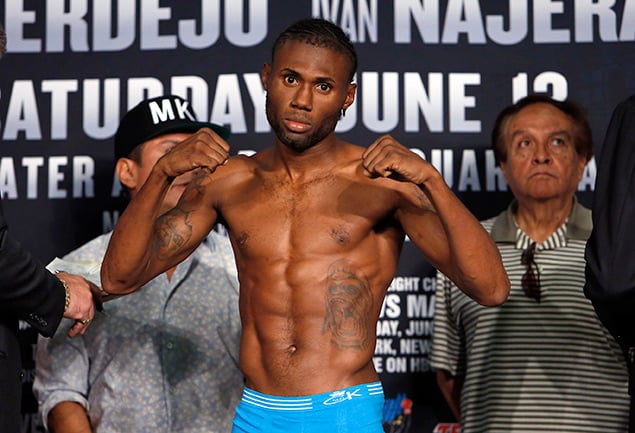 Nicholas Walters lost his WBA 126-pound title on Friday when he couldn’t (or wouldn’t) weigh-in under 127 pounds, an infraction that also cost him $40,000 in fines, but THE RING’s No. 1-rated featherweight kept his unbeaten record intact with a one-sided unanimous decision over amateur rival Miguel Marriaga on Saturday at Madison Square Garden Theater in New York City. Walters won by scores of 119-108, 118-109, 117-110.

Walters (26-0, 21 knockouts), who rehydrated to 145 pounds by fight time, patiently wore Marriaga down with a stiff and busy jab and left hooks to the body before dropping the game Colombian with a counter right hand at the end of Round 9.

The HBO-televised bout was primarily a chess match between two well-schooled boxer-punchers, which caused the crowd inside the Theater, who were mainly there to cheer on Puerto Rican prospect Felix Verdejo in the co-feature to the Top Rank-promoted show, to boo during some of the rounds. However, there was enough intensity and moments from Marriaga, who occasionally landed hard overhand rights — one of which appeared to stun Walters in Round 4 — to make the match compelling.

Marriaga (20-1, 18 KOs), who owns an amateur victory against Walters, was tough, defensively savvy (with his high guard and upper-body movement) and technical enough to compete with the 28-year-old Jamaican. However, Walters was busier, landed more punches and the harder punches throughout the fight.