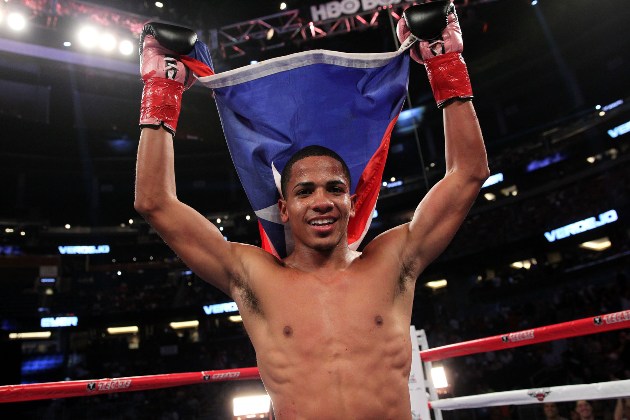 Felix Verdejo, the 22-year-old lightweight prospect many believe to be Puerto Rico’s Heir Apparent to boxing stardom, says his favorite fighter is Miguel Cotto. His vibrant personality, rangy body type and offensive precision have led many to compare him to Felix Trinidad.

In outpointing unbeaten Ivan Najera over 10 entertaining but mainly one-sided rounds on Saturday at Madison Square Garden Theater in New York City, Verdejo exhibited elements of Cotto’s and Trinidad’s boxing styles. Verdejo (18-0, 13 knockouts) boxed tall, patient and with power like Trinidad, scoring knockdowns in Rounds 5 and 7 with his quick and potent left-hand shots. But he was also elusive in spots, utilizing lateral movement and pausing to land hooks to the body, as Cotto is known to do.

Verdejo was in control for most of the HBO-televised bout, as official scores of 100-88, 100-88, 99-89 indicate. He outjabbed his game opponent and landed 51 percent of his power punches, according to CompuBox, but Najera (16-1, 8 KOs), a scrappy 22 year old from San Antonio, had his moments in the fight. Najera proved to be tougher than advertised while proving Verdejo to be as talented as advertised but also a work in progress.

Verdejo, who sold most of the tickets to the Top Rank show, is clearly on his way to stardom but he’s a few years away from realizing his considerable potential.

A full ringside undercard report will be posted shortly.