Hall of Fame: Yoko Gushiken ecstatic over his election 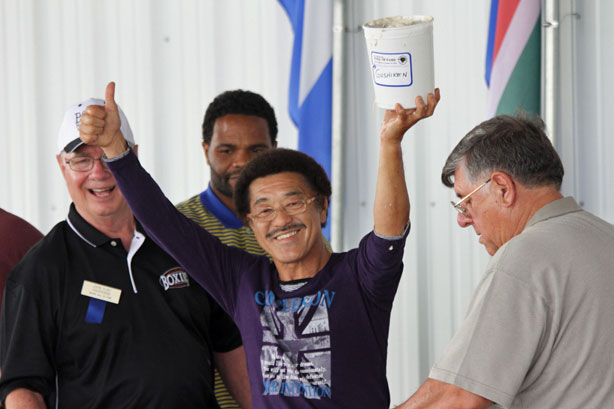 CANASTOTA, N.Y. – At first Yoko Gushiken thought the telephone call from the United States in December was a joke or perhaps a cruel prank.

Gushiken, the former junior flyweight champion from Japan who posted a record of 23-1 (15 knockouts) from 1974 to ’81, was being told he had been elected to the International Boxing Hall of Fame in the Old-Timer category. But Gushiken was aware that relatively few Asians and small fighters are in the IBHOF and, besides, he has been retired for more than 30 years.

Thus, the little southpaw known for his rapid-fire combinations had long since given up hope that he ever would be recognized for his ring accomplishments in this central New York hamlet on the other side of the planet.

Now that he’s here, basking in the adulation of mostly American fans who never saw him fight but know that he is about to be certified as one of his sport’s greats, what once seemed impossible is coming into sharp and pleasant focus.

“For the first time, I feel like being a fighter and a world champion is as wonderful a thing as I always believed it should be,” Gushiken, who turns 60 on June 26, said through a translator. “Now I am taking my place among the immortals. It is difficult for me to express how much appreciation I have for receiving this honor.”

Gushiken, who has remained very popular in his own country, said he hopes his induction helps open doors to the IBHOF for other Asian and lighter-weight fighters whose own Hall of Fame dreams might seem as distant as his did not so long ago.

“With me being inducted, I think it’s going to encourage more Japanese and Asian fighters to work even harder,” he said. “This is a dream that’s attainable but I know it can also seem so far out of reach. Through the technology of television, if fighters put on a good fight, it is possible for anyone to be seen and from anywhere in the world. And the more a fighter is seen, the better the possibility of his being recognized.”

Every fighter who begins his career with a long string of knockouts and then has to settle for a victory on points says it. Oh, sure, they all proclaim that the streak was nice and all but now the pressure is off. I’ve shown the world I can go the distance, that I have endurance and can use my boxing skills if the knockout doesn’t come.

Michael Moorer, the former light heavyweight and heavyweight champion who began his own career with 26 consecutive wins inside the distance, recited the familiar words when he was obliged to go the full 10 rounds in scoring a unanimous decision over Mike “The Giant” White on Feb. 1, 1992.

WBC heavyweight titlist Deontay Wilder (33-0, 32 KOs), who wrested his title from Bermane Stiverne via a unanimous decision on Jan. 17, defends it for the first time Saturday night against Eric Molina (23-2, 17 KOs) in Birmingham, Alabama. Not surprisingly, Wilder is saying just what Moorer expected him to say about the end of his even longer career-opening KO streak.

“When people said things about what I couldn’t do, in my last fight I proved everything to them,” Wilder insisted. “That made me an even more dangerous fighter because now they realize what I’m capable of doing. Not only am I a puncher, but I can box. I can go 12 rounds and make it seem like nothing. That last fight meant so much more than just getting another knockout.”

“Deep down inside they all want to keep their streak going,” Moorer said. “Yeah, you still won, but don’t believe anyone who says they’re glad the pressure’s finally off or anything like that. What are you going to say, ‘Yeah, I won, but I’m disappointed’? So you fabricate something to make what just happened sound like it’s actually something better than another knockout would have been. I said it myself but I didn’t mean it. [Wilder] might be saying it now but you can bet he doesn’t mean it.”

IT’S IN THE CARDS

Don Scott, who founded Boxing Collectors News in 1988, was here for the 27th consecutive year to speak about the joy and occasional frustration of being fully immersed in what might be described as a niche market within the always-fluctuating sports collectibles industry.

In April, a Honus Wagner T206 baseball card sold for $1.32 million. Five years earlier, a similar card sold for $2.8 million. If that signifies tough times in the marketplace, well, it’s still baseball and vintage baseball stuff is always going to be more valuable than vintage boxing stuff because there are more collectors of baseball memorabilia.

Scott said the “Holy Grail” of boxing cards is the 1948 Rocky Graziano card put out by Leaf, one of which sold at auction a few years ago for $41,000. A Graziano in good condition now might fetch $20,000 – a pretty penny if you have one and want to get some fast cash back but still a long way removed from Wagner territory.

Of course, if you had the gloves worn by Muhammad Ali in either of his two fights with Sonny Liston, that’s a different matter. Those gloves – autographed by Ali – were purchased recently for $836,500 and $870,320, respectively.