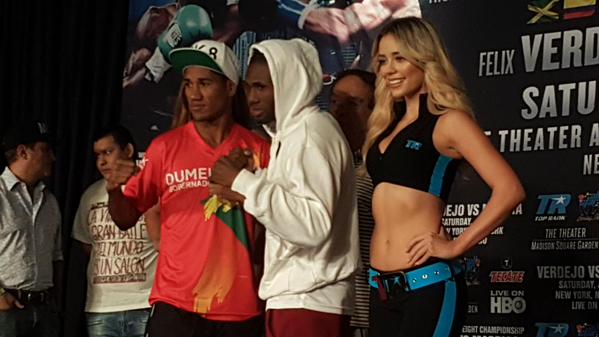 Nicholas Walters is in jeopardy of losing his WBA featherweight belt after weighing in at 127.4 pounds for his scheduled title defense against Miguel Marriaga on Saturday at Madison Square Garden Theater. Walters has two hours to lose 1.4 pounds. If he can’t make the division limit of 126 pounds the WBA title will be vacated and only Marriaga, who weighed 125.2 pounds, will be eligible to win it.

Uber-prospect Felix Verdejo had no problem making weight for his lightweight bout against Ivan Najera. The Puerto Rican attraction weighed 133 pounds for his HBO-televised co-feature with fellow unbeaten prospect Najera, who weighed 131.4 pounds. Walters-Marriaga will be the main event of the HBO Boxing After Dark broadcast.

More weigh-in results will be posted shortly, along with Walters’ final weight.