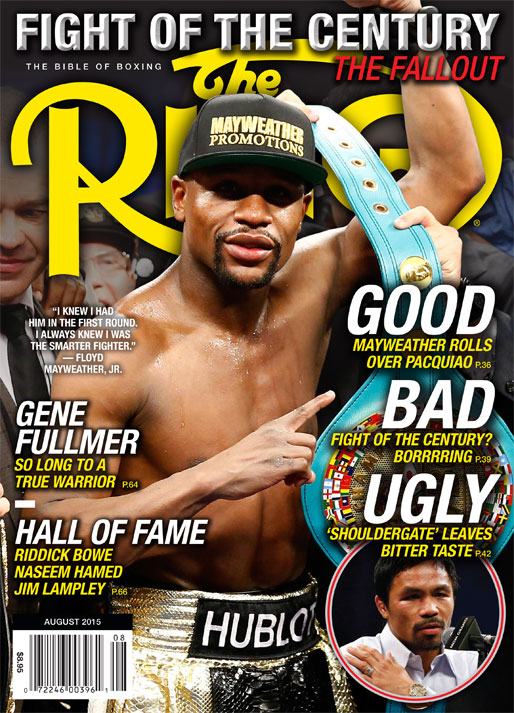 The August 2015 issue of THE RING Magazine is on newsstands now. Don’t know where to find a newsstand near you that sells THE RING Magazine? Click here. To subscribe ÔÇö both to the print and digital versions ÔÇö click here. You can also purchase the current issue on that page.

The long-awaited fight between Floyd Mayweather Jr. and Manny Pacquiao was huge even if it wasn’t thrilling.

In the ring, Mayweather was Mayweather, using his sublime defensive skills to thwart everything Pacquiao threw at him to win a clear decision May 2 in Las Vegas. Pacquiao provided most of the drama afterward, announcing that he entered the fight with a bum shoulder that later required surgery. And the numbers were big – very big. The fight drew a reported 4 million-plus pay-per-view buys, which means all revenue records were smashed.

All in all, it was an event that will never be forgotten.

You can relive the “The Fight of the Century” in a keepsake August issue of THE RING Magazine, which is on newsstands now and available at RingTV.com.

In our lead story, Ron Borges writes in The Artful Dodger that even if you feel the entertainment value of the fight was low, you must appreciate the manner in which Maywether controlled the fight from beginning to end.

THE RING grades nine aspects of the event in its Report Card, including an overall score. How did you rate the fight?

In One-armed and Not So Dangerous, Norm Frauenheim breaks down what became known as “Shouldergate,” Pacquiao’s announcement that he injured his right shoulder in training yet went ahead with the fight anyway.

One of the most striking aspects of the event was the number of A-list celebrities on hand. In Star Power, THE RING collected a few dozen images to give you an idea who was there.

And Springs Toledo provides an unusual and compelling perspective on Mayweather’s performance and the fighter himself in The Good Fight.

Elsewhere in the issue, we took only a quick look at the war between Canelo Alvarez and James Kirkland because it took place as we were preparing to go to press. More on that fight in the September issue.

In Chasing the American Dream from a Smuggler’s Boat, Brin-Jonathan Butler provides a harrowing look at the lives of Cuban boxers who make the decision to defect from their homeland.

THE RING celebrates its photographer Naoki Fukuda in Undisputed Champion, a collection of his award-winning boxing photos.

All-time great Gene Fullmer is remembered in A Classic Brawler, Lee Grove’s look back on the middleweight champ’s remarkable career.

In our Innternational Boxing Hall of Fame coverage, Bernard Fernandez writes in Nagging Questions that the career of new inductee Riddick Bowe will always be marked by “what ifs?”

In British Royalty, Elliot Worsell writes that new inductee Naseem Hamed was an excellent fighter who also knew as well as anyone how to play to the crowd.

And, in The Voice of Boxing, Mark Whicker looks back on the career of new inductee Jim Lampley, the HBO blow-by-blow broadcaster who has put words to many of the sport’s greatest moments over the years.

Also in the August issue: