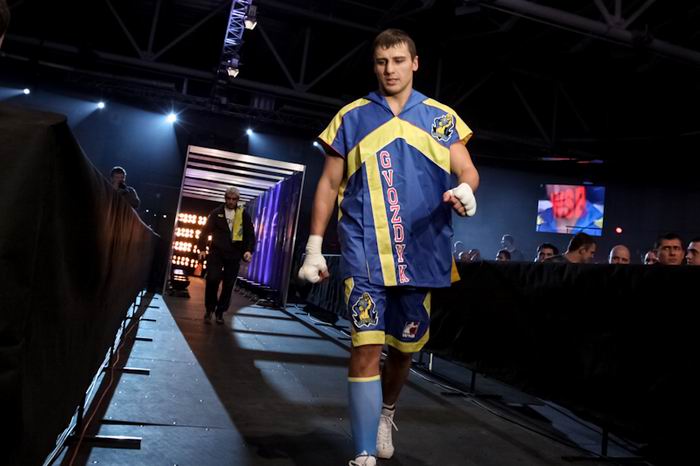 OLEKSANDR GVOZDYK
Age: 28
Hometown: Kharkov, Ukraine
Weight class: Light heavyweight
Height / reach: 6-foot-2 (188 cm)/ 75¾ inches (192 cm)
Amateur record: 220-30
Turned pro: 2014
Pro record: 5-0, 4 knockouts
Trainer: Robert Garcia, Marco Contreras, Roger Anderson
Manager: Egis Klimas
Promoter: Top Rank Inc.
Best night of pro career: Gvozdyk has won all five of his professional bouts so far, impressively beating steadily improving competition. “[It’s] too early to speak about my best night; I have only five fights in [the] pros.” he told RingTV.com in late May through manager Egis Klimas.
He easily dispatched usually durable Cory Cummings in two-one-sided rounds in his most recent outing.
Worst night of pro career: The heavy-handed Ukrainian has yet to be pushed in two years as a pro. He’s stopped all but one of his opponents and is happy with all his performances at this point.
Next fight: He had been due to face Rowland Bryant in April, only for that to fall out at the last minute. Gvozdyk was then to meet Chris Henry but now meets late substitute Michael Gbenga at Florentine Gardens in Hollywood, Calif. on this week’s edition of “Solo Boxeo” on UniMas. However his fight will not be televised.

“I’m looking at Michael Gbenga, like a dangerous puncher,” he said. “I think its another step in my pro career.”

The two met in Gvozdyk’s second outing a year ago and the durable Nigerian went the six-round distance. The 36-year-old is 20-20 with 20 KOs but has only been stopped on four occasions.

Why he’s a prospect: Gvozdyk comes from an impressive amateur background. He represented his country at the 2009 and 2011 World Championships, though lost before the medal rounds. He was the Universiade world champion in 2008 and 2013 and Europe Cup winner in 2010. He also fought in two seasons of the World Series of Boxing, going 9-0.

At the 2011 Worlds, he lost to fellow standout Egor Mekhontsev and, despite the loss, he qualified for the Olympics, in which he was part of the supremely talented Ukrainian Dream Team.
In London, he lost on the countback system against Adilbek Niyazymbetov, at the semifinal stage and had to settle for a bronze medal.
After the Olympics, he signed pro forms with renowned manager Egis Klimas, who took his client to Top Rank Promotions.
He says the transition to the pros has been seamless: “I didn’t have problems with it; [I] feel comfortable.”
Since making the switch, Gvozdyk has gained invaluable pro experience sparring the likes of Cuban heavyweight Mike Perez, up-and-coming Mexican super middleweight Gilberto Ramirez and teak-tough Philadelphia native Gabriel Rosado.
Top Rank’s Brad Goodman has matched the big Ukrainian for all of his fights and likes how he’s developed.
“I give him and the team a lot of credit for stepping up and fighting top-notch opposition at such an early stage of his career,” explained Goodman. “He’s a very capable guy; he’s well advanced and each fight now I think he’s going to be on this Chris Henry-type of level. There’s no holding him back; there’s no grooming him. Their expectations, I think, are maybe fighting for a world title by the end of the year.”
So how far is Gvozdyk from the likes of RING champion Adonis Stevenson and Sergey Kovalev?
“I don’t think they’re gonna be fighting tomorrow,” explained Goodman, “but, at the end of the day, what we do at Top Rank is groom them to a certain level and then it’s up to them to step up to the plate. Guys like Kovalev and Stevenson, that’s going to take a little longer and that doesn’t mean he can’t beat certain guys now who are champions.
Goodman believes Gvozdyk to be on par with uber-talented Artur Beterbiev and Mekhontsev: “He’s on that same level; if they can do it, he can do it.
Klimas similarly sees considerable upside in his client: “I see him as a good fighter, smart with lots of patience.”
Why he’s a suspect: The recently turned 28-year-old has breezed past the opposition to this point with minimal fuss. Like many Eastern Europeans, he’s very focused and dedicated to his craft and is constantly striving for perfection.
“I think [all] boxers should try always [to] improve all areas, weaknesses and strengths.” he said.
Goodman is unsure how the Ukrainian takes a shot: “The only thing is he has been dropped in the World Series of Boxing. He hasn’t shown any weaknesses as of yet. Nobody has really got to his chin or anything like that. That’s probably the only thing we worry about. He may have a great chin for all we know about; that remains to be seen. Hopefully it’s not going to be something we have to find out.”
Story lines: Gvozdyk became interested in boxing at a young age. He played a lot of sports; nothing changed and he progressed in boxing.
Gvozdyk’s boxing hero is Vasyl Lomachenko. The two were on the Ukrainian national team together and now share the same manager.
Gvozdyk’s nickname “The Nail” is the translation from Ukrainian to English.
He’s married and has two children. Away from boxing, he likes to spend time with family and friends.
Fight-by-fight record:

Questions and/or comments can be sent to Anson at [email protected] and you can follow him at www.twitter.com/AnsonWainwright
Share this story