Nicholas Walters looks ahead, not behind, when it comes to Marriaga 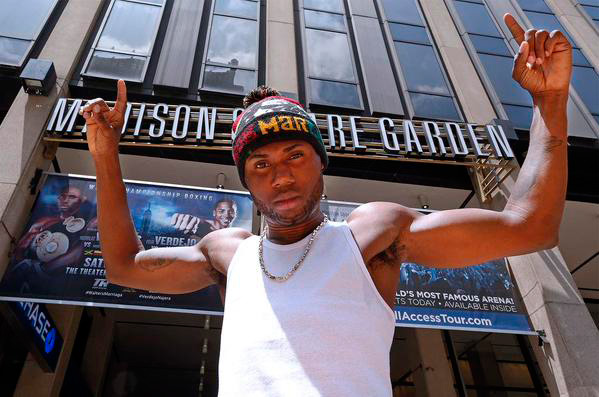 NEW YORK, N.Y. – Deep down you know he still harbors the memory, like the high-level business exec who once used to be the fat kid at recess everyone mocked in another life. Like any fighter who lost and yearns for the chance to one day remove the dagger that won’t go away.

One way or another, revenge will be served.

So somewhere you just know featherweight titleholder Nicholas Walters remembers losing to his Saturday challenger, Miguel Marriaga, as an amateur, despite Walters proclaiming the contrary.

What won’t go away occurred on April 25, 2008, at the Americas Olympic Qualifier, when Walters dropped a decision to Marriaga, 14-9. It was the last time Walters lost. Four months later, he turned pro, and four years after that, he became a major beltholder.

But it is 29-year-old Walters (25-0, 21 KOs) who has the most to lose – and to gain on the show. With a victory, Walters has an apparent date with WBO featherweight champ Vasyl Lomachenko possibly in the fall, which is something Top Rank’s Bob Arum has already broached.

First, however, Walters has to get by Marriaga, which won’t be an easy task. The Colombian has stopped his last four opponents, and 12 of the last 13 he’s faced. He also owns a victory over Walters – which the “Axe Man” just can’t seem to recall.

“Marriaga may have beaten me in the amateurs but I do not remember it,” said Walters, from Montego Bay, Jamaica. “Besides, those fights are four rounds. On Saturday, we will be fighting 12 rounds. He may be bringing his ‘A game’ but I am bringing my ‘A-plus game.’ I have trained for a knockout victory. I am going to destroy him.

“I am overwhelmed to be fighting at Madison Square Garden, the Mecca of Boxing, because so many of boxing’s great champions have fought here. It is hallowed ground. It is my honor and I want to give my best performance there. To be greatÔÇªto be known as the bestÔÇªyou have to beat the best and I am ready to take on all champions in my division and beyond.”

If Walters has a tough time jogging his brain cells for a loss over seven years ago, Marriaga is more than happy to oblige him. Marriaga wants to spoil Walters’ plans and snatch the Lomachenko date for himself.

“Of course Walters doesn’t remember me beating him for a spot on the Olympic team ÔÇª because he lost!” said Marriaga, who will be fighting in the United States for only the second time in his 20-fight pro career. “He’s not going to remember Saturday, June 13 for the same reason! I have the strength and the intelligence to beat him. After I beat Walters again on Saturday I look forward to unifying the titles in my next fight.”

Walters, THE RING’s No.1-rated featherweight, has stopped his last five opponents and 11 of his last 12. He’s ripped through Nonito Donaire, Vic Darchinyan, Alberto Garza and Daulis Prescott in a combined 22 rounds. Walters’ six-round rout of Donaire, who Walters knocked down in the third and sixth rounds, is the longest he has gone in the last two years.

You have the feeling Walters wants to tear through Marriaga much the same way as he did that quartet. All spurred by a fight he seemingly can’t recall.