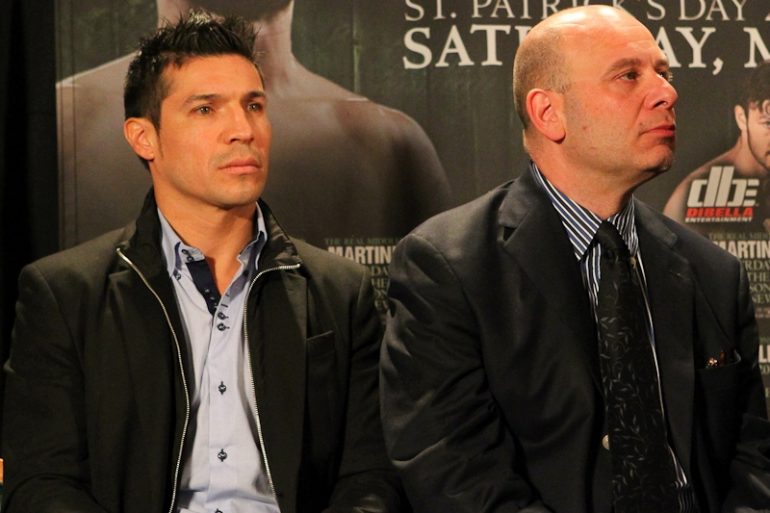 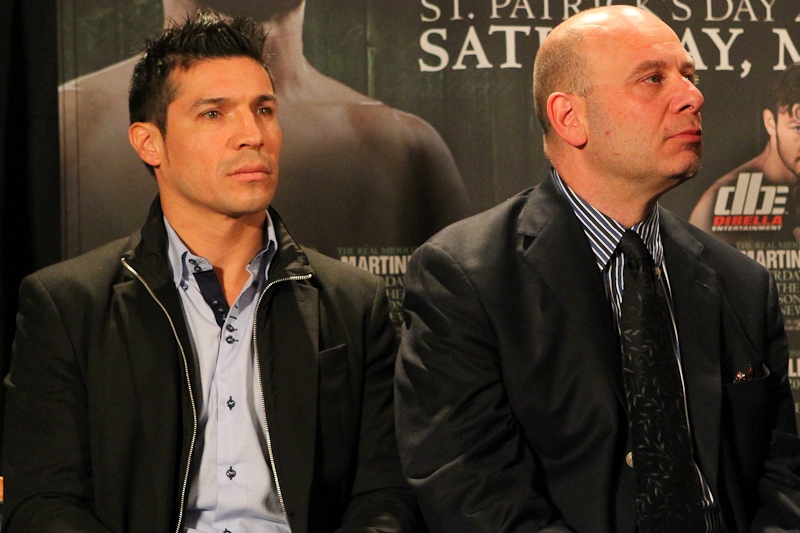 This is the age of the ultra know-it-all. Any buffoon, or half-buffoon, with a measure of real intel and a platform – hello, Twitter – can put forth a theory, expound upon it, spread a message far and wide and that message can go around the world twice before a counter-attack or counter-punch or fact-check can be mustered.
Promoter Lou DiBella has about had it with a text meme bouncing around, purporting his fighter, Sergio Martinez (age 40; 51-3-2, 28 knockouts) was damaged goods, and that he knew he was damaged goods, going into what will likely be his last fight against Miguel Cotto, on June 7, 2014.

“Woods, Sergio had physical problems since he was a cyclist and soccer player,” Lou told me. “We never made an offing excuse after Cotto. You were there! We thought he was fit but his knee was never 100 percent. That’s not an excuse. [Martinez] got caught. He wasn’t 100 percent in any fight I promoted him but he was still great.”

This issue, that of a fighter coming into a bout less than 100 percent, is that much more germane because Manny Pacquiao entered his May 2 clash against Floyd Mayweather with a bum right wing. He’d torn his right rotator cuff less than a month before the bout but saw docs, who said he could go. His injury was brought up after Mayweather handled him pretty easily and Floyd-favorers brought it hard to Team Manny.

Well, there are excuses and there are explanations and sometimes there is overlap. And I get thatÔÇªIt’s human nature to defend oneself after the fog of war has cleared and one is doing a post-mortem. We need to protect our egos and, yes, even XL marquee athletes have fragile egos. Hello, some of them are narcissists whose egos are more fragile than those belonging to the average Joe. They soak in narcissistic supply when the masses tell them they are lovely and great and talentedÔÇªand when that supply is threatened, injury to their psyche occurs. Not saying this pertains to Manny but you get my point. Also, warriors have a stubbornness which allows them to soldier on when not prudent. Thus, when faced with adversity which would make you or I go accordion, they concoct a defense in their minds to help them combat negative inputÔÇªand soldier on. It’s an element of their greatness, this severe and sometimes maniacal stubbornness.

Back to Martinez-Cotto and within a context of a Martinez versus Gennady Golovkin fight, as some folks think DiBella is full of it, talking about a need for the best fighting the best when, they say, he had his guy avoid “Triple G.”

“Sergio was older and not 100 percent, though not to our knowledge, “injured”, when GGG was rising and not a pay-per-view fighter,” DiBella continued. “Sergio and GGG never intersected for a fight that would have sold and been a fair fight. You KNOW I thought Martinez would beat Cotto! And GGG STILL isn’t a PPV fighter unless Canelo [Alvarez] fights him. And I was never going to let an older, chronically injured Sergio get in the ring with GGG, who, at the time, generated no real money.”

An important point DiBella wanted to make, against what could be considered a case of Swift-Boating against himÔÇª

Some good stuff there to ponder. DiBella is in a rough spot, at times. I know the guy; he doesn’t see his fighters as robots. To one degree or another, he usually likes them, so, he has to wrestle with various inputs. He’s a promoter and is there to make compelling matches, to sell them, to make money. But when he has such high regard for a mensch of a man, like Sergio, does he want to “throw him to a young wolf,” arguably, in a Golovkin? So maybe sometimes he has to employ some language which is there to save the feelings of a person he is fond of…if he were to toss out there, theoretically, “I think Golovkin is a beast and I don’t want to see my aging-but-still skilled fighter risk brain trauma against him,” do you think his own fighter would care for that? Rhetorical question…

Also, to be honest, it can be a slippery slope for a promoter, when he must employ logic and reasoning, which, in the past, might have been employed by him against a foe. That’s why consistency of reasoning is so key. You can’t – one can’t – be, for example, railing against a prospect helmed by the other guy building a resume on soft touches, when your own guy is inflating his record against canvas-backs…
“Sergio is the most honest fighter I’ve ever known,” the New Yorker told me. “He would never defraud the public. He NEVER made excuses. All his accomplishments were made on legs that were less than 100 percent. There’s a big difference between fighting with an incapacitating injury and fighting through chronic pain with courage and will.

“Pre-fight, I didn’t believe his knee was any more of a problem than it ever has been. Neither did he! Sergio wasn’t injured when he fought Cotto…he was CHRONICALLY injured. Sergio never had two 100 percent legs for ANY FIGHT THAT I PROMOTED. We thought he was worse off for Darren Barker, Matthew Macklin and Martin Murray than Cotto. He got into boxing partially because his legs weren’t good enough for cycling or soccer. That’s part of his GREATNESS.”

It’s true, these guys are in the hurt business and come into fights hurting, to one degree or another. Lou is right; it’s part of what makes them great, their tolerance to pain which would make the average Joe wilt. But I’m saying right now, I stand with DiBella when he says he thought his guy was good enough to beat Cotto; I thought it was a coin-flip fight and so did many of the know-it-alls…until the result. Then you get the revisionist history, the spate of “I told ya so”s, etc. Great time to be a know it all, 2015. Twitter is sooo helpful.