Liam Walsh closing in on world title shot at 130 pounds 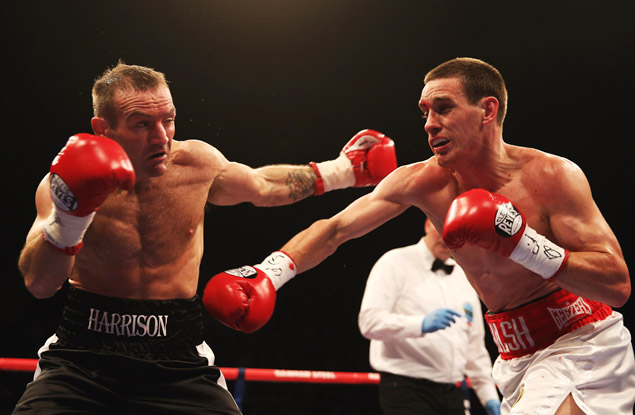 Unbeaten British junior lightweight Liam Walsh is closing in on a WBO world title shot but must first defend his British and Commonwealth championships against countryman Troy James on July 11 in Manchester, England.

Walsh is rated No. 4 by the WBO and has one eye on the Roman Martinez-Orlando Salido rivalry. In April, Martinez captured a version of the junior lightweight title, for a third time, when he outpointed Salido and the pair now look set for an explosive sequel in September.

“I’ve been training and fighting hard my entire career and now I’m getting close to the big one,” said Walsh in a press release issued by Queensberry Promotions. “I watched Martinez versus Salido and was impressed with both guys, but I really believe that I could beat either one of them if I had the chance.

“Martinez holds the title and I’d love the shot at him. He’s already been beaten by (Ricky) Burns, but I reckon I could do a great job on him. Salido is the more attractive name because he holds the win over Vasyl Lomachenko and I think it would be a war between us.”

Despite Walsh’s talent and unbeaten record (18-0, 12 knockouts) he does recognize that looking ahead could be a recipe for disaster.

“Right now I’m focusing on Troy James,” said the 29-year-old southpaw. “I’ve watched him for the last few years and he can be really dangerous. He used to be an aggressive and wild fighter but he’s toned it down now and become more effective. He’s not easy to hit and he can bang a bit, so I’ve got to be careful with him.

“The pressure is on, but I like pressure as it helps me perform to my best and that’s how diamonds are made.”

Terry Flanagan headlines the card when he challenges for the vacant WBO lightweight title against Jose Zepeda. Also on the show Paul Butler, the former IBF bantamweight titleholder, makes his comeback, and hot young junior welterweight Jack Catterall takes part in a 10-round bout.