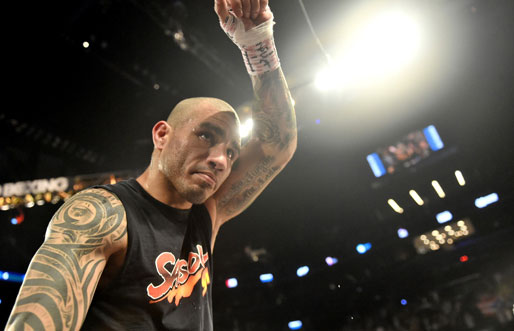 Miguel Cotto: Cotto deserves credit. The RING and WBC middleweight champ dismantled a competent opponent in Daniel Geale on Saturday night in Brooklyn, scoring a brutal fourth-round knockout. And the gratitude he has for trainer Freddie Roach for pumping life into his career is endearing. Great fighter, good guy. That’s about as excited as I can get about Cotto-Geale, though. Everyone is entitled to gimme fights, as this one was for Cotto, but it was impossible to summon enthusiasm for the fight because of Geale’s limitations. Is that what Cotto wants at this stage of his career? Apathetic fans? And the fact it was a title defense in spite of a 157-pound catch weight – three below the normal limit – was wrong, in my opinion. The standards were changed to cater to Cotto, who received an advantage but also damaged his credibility to some degree. And, finally, I still think Cotto is more illusion than reality when you consider his last three victims: Delvin Rodriguez, a crippled Sergio Martinez and Geale. I believe a giant step up to Gennady Golovkin or even Canelo Alvarez would expose an aging champion who remains an excellent fighter but is too small and not quite good enough at this point to beat the very best middleweights. I’ll give him this, though: It definitely will be interesting to see what happens going forward.

Robert Guerrero: What happened to the Guerrero of only a few years ago? Guerrero, a former two-division titleholder, had to dig deep to score a split-decision victory over Aron Martinez on Saturday afternoon in Carson, California. Aron Martinez. No offense to the Los Angeles fighter, who is a solid, tough fighter. The thing is that Guerrero would’ve owned a limited, light-punching foe like Martinez (19-4-1, 4 KOs) once upon a time. And Guerrero (33-3-1, 18 KOs) has very little to celebrate in his last four fights since he outslugged Andre Berto: one-sided losses to Floyd Mayeather Jr. and Keith Thurman and taxing victories over Yoshihiro Kamegai and Martinez. Worse case scenario is that Guerrero is simply in steep decline after a number of brutal fights, particularly at 147 pounds. It happens to the best of ’em. Another possibility is that Guerrero has forgotten what got him to the top. He was always a spirited, resilient fighter who seemed to enjoy a good scrap. He was also a very good boxer, though. If I were advising Guerrero, I would suggest two things: 1. Go back to boxing to avoid unnecessary punishment. And 2. Consider moving down to 140 pounds if he can make that weight. Remember: He went directly from lightweight to welterweight in 2012. I think he could regain a strength advantage he lost by moving to 147. No matter what happens, I’ll always remember Guerrero fondly as one of the most intense competitors of his generation. He was always fun to watch.

Vic Darchinyan (40-8-1, 29 KOs) is another fighter nearing the end of his career. The Armenian demonstrated again against Jesus Cuellar (27-1, 21 KOs) on Saturday in Carson that he can still box. He just can’t take a good shot. He’s 1-3 in his last four fights, with all the losses coming by knockout. Darchinyan obviously loves to fight but, at 39, he might want to call it a career. And kudos to Cuellar, a rising featherweight who has stopped his last three opponents. ÔÇª 2012 American Olympian Dominic Breazeale scored his most important victory, stopping previously unbeaten Cuban Yasmany Consuegra in three rounds in a scheduled 10-round heavyweight bout in Carson. Breazeale (15-0, 14 KOs) put Consuegra (17-1, 14 KOs) down three times. ÔÇª Featherweight contender Jayson Velez (23-0-1, 16 KOs) bounced back from his draw with then-titleholder Evgeny Gradovich by outpointing Daniel Ramirez (11-3, 5 KOs) in a junior lightweight bout Thursday in the LA Fight Club series in Los Angeles. Velez, an aggressive, entertaining fighter from Puerto Rico, looked pretty good but I was more impressed with Ramirez’s effort. The Tijuana-based Mexican turned what might’ve been a beat down into a competitive bout by fighting his heart out. He was utterly spent at the end of the 10 rounds.