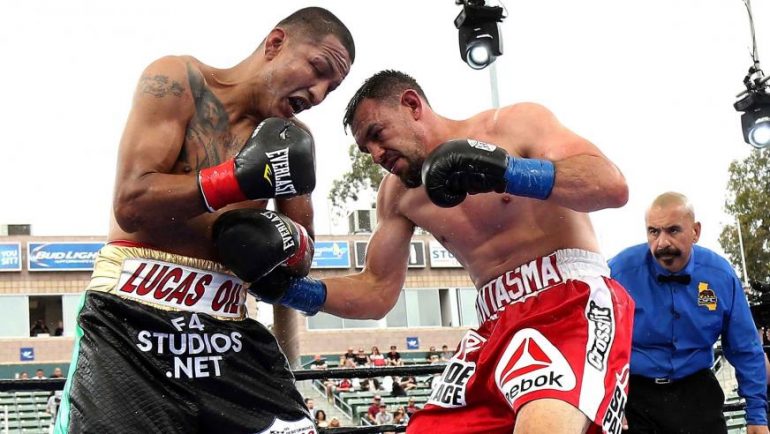 Welterweight contender Robert Guerrero survived a knockdown and the tenacious aggression of Aron Martinez to earn a hard-fought split decision in the main event of a Saturday afternoon “PBC on NBC” card at StubHub Center in Carson, California. Guerrero, who was dropped in the final seconds of Round 4, won by scores of 97-92, 95-94, 94-95.

Guerrero (33-3-1, 18 knockouts) tried to impose his will on Martinez by smothering his underdog opponent, but he quickly found that Martinez was more effective on the inside. Martinez (19-5-1, 4 KOs) got the better of Guerrero during the inside grappling and was able to land uppercuts and hooks which snapped his better-known opponent’s head back. The unheralded East L.A. slugger bulled Guerrero to the ropes and got off with hook-cross combinations that put Guerrero down to his hands and knees at the end of Round 4.

Martinez continued to take the fight to Guerrero in Round 5, but the former featherweight and junior lightweight titleholder bounced back in Rounds 6, 7, 8 by boxing from a distance. However, Guerrero swatted with his jab and his punches, which were rarely delivered in combination, appeared to lack their usual snap.

The 32-year-old veteran from Gilroy, California, was coming off a punishing 12-round unanimous decision loss to undefeated contender Keith Thurman in March. His sluggish performance against Martinez, a competent but unranked fighter not known for his punching prowess, may the result of coming back too soon from a tough fight, or it could be an indication that Guerrero is on the downward slide after a long, accomplished career that included many grueling distance fights.

Guerrero had enough experience and ring savvy to pick his spots in the final two rounds, but though he was able to squeak by Martinez (the 97-92 scorecard was not indicative of the fight), his status as a world-class welterweight has to be questioned.

Consuegra (17-1, 14 KOs) landed an overhand right repeatedly throughout the fight but couldn’t hurt Breazeale, who used his size (he was almost 30 pounds heavier) to back the 31 year old up in Round 2. The 29-year-old 2012 U.S. Olympian from Alhambra, California, dropped Consuegra with a right to the top of the head at the end of the round. Breazeale (15-0, 14 KOs) continued to land his heavy right (while eating right hands from the Cuban) in Round 3, dropping the smaller heavyweight twice, prompting referee Wayne Hedgepeth to wave the fight off at 1:49 of the round.