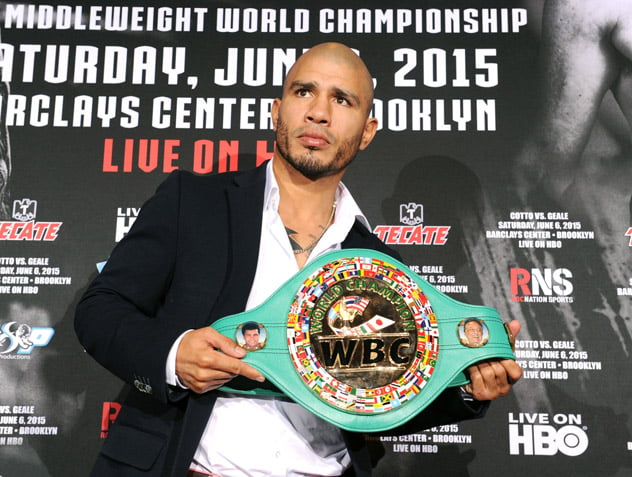 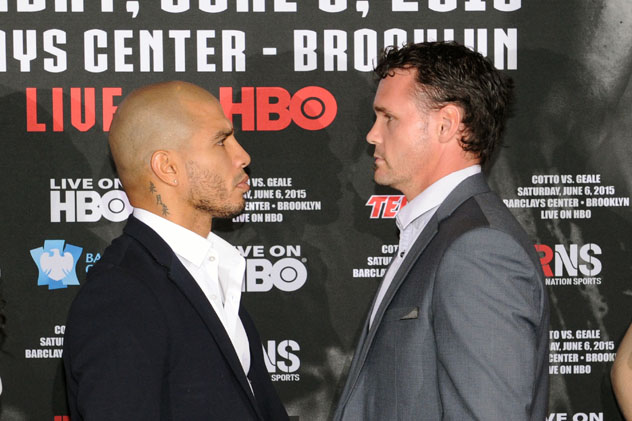 THE RING middleweight champion Miguel Cotto believes he would have too much for either Canelo Alvarez or Gennady Golovkin if they were to ever share a boxing ring.

The 34-year-old makes the first defense of his WBC title in New York on Saturday against Australian Daniel Geale and much of the pre-fight talk has revolved around future business. Cotto, straight to the point, was far from positive when it came to discussing his potential opposition.

“Canelo had his moment to shine against [Floyd] Mayweather and everyone knows what happened there,” he said in a press release issued by UK subscription channel BoxNation. “Golovkin is a guy who has never faced, in my opinion, ‘Class A’ opponents and people are still asking for those kinds of fights.

“I’ve been here for 14 years, facing everybody. After Saturday, we’ll see what happens in my career.”

Cotto hasn’t fought since he captured the 160 pound title from Sergio Martinez last June. The four weight world titleholder insists that he is ready to go following that layoff and will not be comparing his performance against Geale to that of Golovkin’s – a savage third round stoppage.

He said, “All I did was rest every part of my body. It’s healed. I’m fresh, I’m new, and everybody is going to see it this Saturday. I feel better, I feel rejuvenated, and I feel I can beat anyone in boxing.

“I don’t have any pressure on me. It doesn’t matter to me how Golovkin did with Geale and how I do – it’s two different fights. Golovkin has his own style and I have my own.”

Geale, a former middleweight titleholder, believes that Cotto is overlooking him ahead of their 157-pound catch weight meeting, and is determined to spring a major upset away from home.

“Miguel and his camp are looking past me,” said the challenger, who is rated No, 4 by THE RING at 160 pounds. “They’ve chosen me because they don’t think I’m one of the super strong middleweights at the moment, and by bringing me down a few pounds they think they’re going to weaken me.

Cotto weighed in officially at 153.6 pounds and Geale was bang on the agreed upon limit of 157.

Cotto vs Geale will be aired on HBO World Championship Boxing. In the UK the bout will be shown live and exclusive on BoxNation (Sky437/490HD, Virgin 525, and TalkTalk 415) this Saturday night. Visit boxnation.com to subscribe.