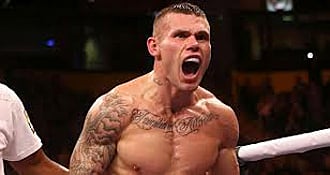 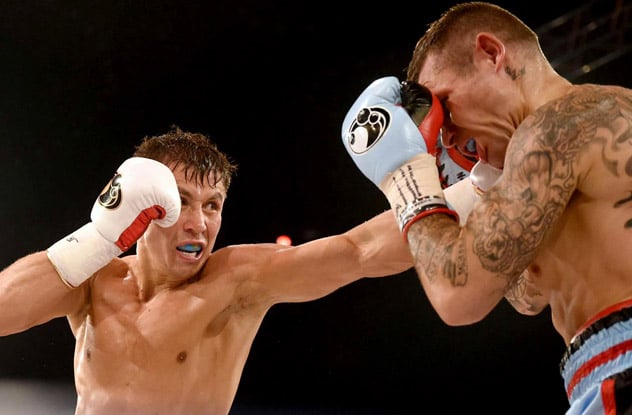 Murray (r) gave his all in a losing effort against Golovkin. Photo by Naoki Fukuda

British middleweight Martin Murray has signed a promotional deal with Eddie Hearn and Matchroom Boxing and will debut as a super middleweight for his new promoter in Liverpool on June 26.

The Englishman’s latest move will be officially unveiled at a press conference in London on Wednesday, where he will discuss his future plans as he boxes in England for the first time since December 2013.

Murray, rated No. 6 by THE RING at 160 pounds, is coming of an 11th round TKO defeat to Gennady Golovkin. The game 32-year old extended the fearsome WBA titleholder further than any previous challenger, and is looking forward to the next chapter in his career at 168 pounds.

“I’m delighted to sign for Matchroom and am so excited about the future,” said Murray in a press release issued by his new promotional outfit. “I’ve been in major fights all over the world against Felix Sturm in Germany, Sergio Martinez in Argentina and Golovkin in France but now I feel it’s time that I had those major fights in the UK.

“I’ve fought the very best at middleweight and now I’m ready to do the same at super middle. It’s a hot division and domestically can throw up some absolute wars. James DeGale did great to capture a world title and I’d love that fight later this year. George Groves is also challenging for a title and again, that’s a fight I’d relish.

Promoter Eddie Hearn said, “I’m delighted to welcome Martin to our team of elite fighters. Martin has proved time and again that he is one of the best middleweights in the world and now I am looking forward to building him further in the UK and being involved in some huge domestic and international fights.

“It all starts on June 26 at the Echo Arena – these are great times for British boxing and I’m so pleased I get the chance to deliver for Martin Murray.”

Murray replaces David Price on the Liverpool bill after the heavyweight favorite was forced to withdraw from action due to a neck injury.