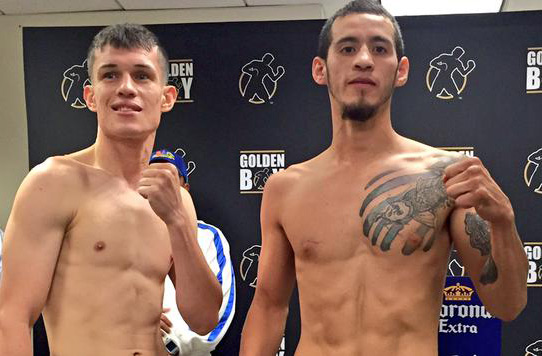 Daniel Ramirez’s nickname “Huracan” (Spanish for “Hurricane”) was given to him for his skills as a sushi chef, not his because of his fighting style – although it should be noted that he is an aggressive boxer who loves to go to the body.

The former resident of Tijuana, Mexico is an aspiring sushi chef, who has dreams of opening and owning his own restaurant, but he also has goals in boxing. The tall and rangy junior lightweight can significantly advance his fighting career if he can upset Jayson Velez in tonight’s Fox Sports 1-televised “LA Fight Club” main event from the Belasco Theater in Los Angeles. Velez is a top-10 featherweight contender. A victory over the unbeaten Puerto Rican could earn Ramirez (11-2, 5 knockouts) a ranking in one or more of the sanctioning bodies.

Ramirez, 25, is coming off a sixth-round TKO loss to Eric Hunter last November. He understands the odds are stacked against him tonight.

“Yes, I am always the underdog,” he told RingTV.com “It drives me as a fighter to gain the victory and create many more opportunities.

“This fight is very important. This bout will determine my career. This is a crossroads fight. I need this victory.”

RingTV.com – How does a fighter bounce back from defeat and take on another world-class athlete?

Daniel Ramirez – Beating a guy like Velez, with the level of competition he has, is the best way to bounce back from a loss.

RTV – If victorious against Velez, could this open up many more opportunities and lead to the championship level?

RTV – The odds are stacked against you, does that motivate you against the favored Velez?

DR – Yes, I am always the underdog. It drives me as a fighter to gain the victory and create many more opportunities.

RTV – How did you get into boxing?

DR – I would get bullied a lot. It was a tough neighborhood, I would get beaten up, slapped around, so my dad grew tired of the situation and took me to the gym and make me fight these bullies.

RTV – Where would you be without boxing?

DR – I probably be a chef. I worked at a sushi restaurant in Tijuana.

RTV – Is that a fallback career after boxing?

DR – I don’t mind completing both jobs as a boxer/sushi chef. I would love to have a restaurant after boxing.

RTV – You’re one and two in your last three. How concerning is it for you to secure a victory in your very first fight of 2015?

DR – This fight is very important. This bout will determine my career. This is a crossroads fight. I need this victory.

RTV – Talk to us about some of the boxing heroes you had as child growing up?

DR – Julio Cesar Chavez sr., Shane Mosley and Oscar De La Hoya were the three fighters I looked up to growing up.

RTV – This fight will be on Fox Sports 1. Will you have family and friends tuning in to this fight?

DR – I have many friends and family watching my fight on television and attending my bout with Jayson Velez live at The Belasco Theater.

RTV – Velez is the favorite in this fight, he’s the contender, also being backed up by Golden Boy. However, he’s the Puerto Rican fighter; you’re the Mexican fighter, will you have more fans supporting for you?

DR – I feel I will have a larger Mexican audience in support of my fight against Velez. Jayson is coming from out of town, into Los Angeles, close to home.

RTV – Do you think that Velez could be underestimating you as an opponent?

DR – If he has, he will be in for a great surprise. It doesn’t matter to me what he thinks of me as an opponent. I just hope he brings a fight to me and for the fans.

RTV – How did you get the nickname “Huracan”?

DR – A guy from the neighborhood started calling me the Hurricane, the sushi roll, because of my culinary skills (laughs). The hurricane nicknamed stuck because of the way I fought from the beginning of my career.

RTV – Do you have to bring in the storm against Velez? Live up to your name the “Huracan?”

DR – Without a doubt, I will live up to the name.

RTV – Any final words to your fans and as to why you will be victorious against Velez?

DR – This is the biggest fight of my boxing career without a doubt. I want to thank my fans who continue to support me, because I will win this fight.