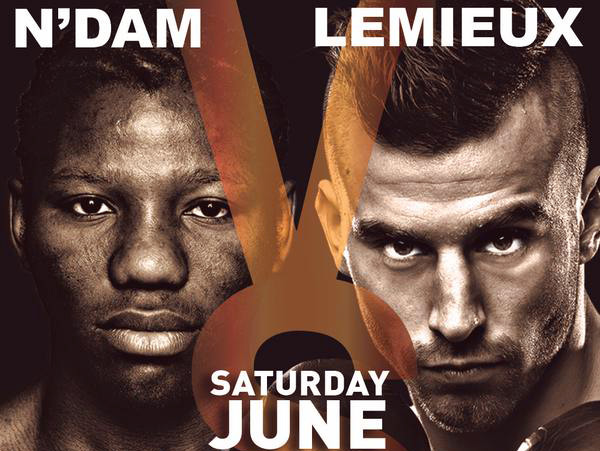 The David Lemieux-Hassan N’Dam showdown for the vacant IBF middleweight title, which takes place June 20 in Lemieux’s native Montreal, will be televised on Fox Sports 2 and Fox Deportes in the U.S., Golden Boy Promotions and Eye of the Tiger Management announced on Wednesday.

The live broadcast from the Bell Centre will also include a 10-round lightweight bout between former title challengers Dierry Jean and Jerry Belmontes, and an eight-round heavyweight bout featured undefeated Cuban standout Luis Ortiz.

“Being on Fox Sports is a great opportunity to use this exposure and show fans an explosive night of boxing,” Lemieux stated in the press release. “I plan to put on a show and draw more people as fans to my sport.”

Lemieux, who recently signed a promotional contract with Golden Boy Promotions, is coming off an impressive 10th-round stoppage of former title challenger Gabriel Rosado in his U.S. debut last December. N’Dam’s last outing was a once-sided 12-round unanimous decision against the normally dangerous Curtis Stevens last October. N’Dam, a 31-year-old veteran from France by way of Cameroon, dropped the New York puncher en route to the easy victory.

“The broadcast on Fox Sports will allow American audiences the chance to see a great fight featuring two of the most exciting stars in boxing,” said Oscar De La Hoya, President and Found of Golden Boy Promotions, stated in the press release. “This match-up will deliver action-packed intensity as both Lemieux and N’Dam are hungry to move their careers forward and claim the title.”