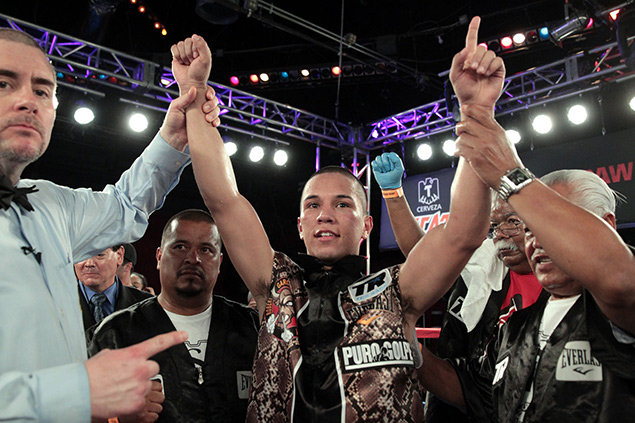 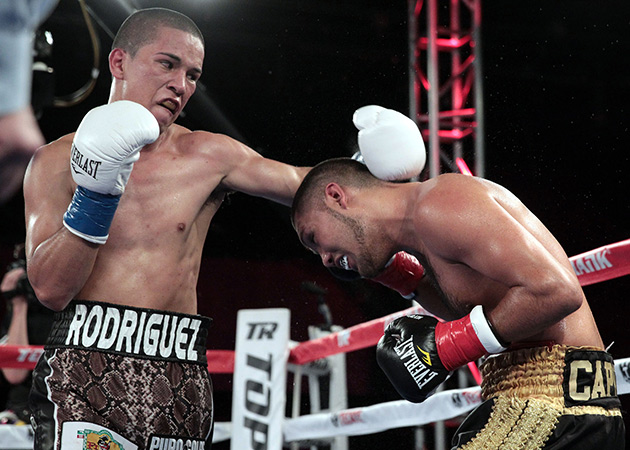 HOLLYWOOD, California – Unbeaten junior lightweight prospect Saul Rodriguez has a penchant for highlight-reel knockout wins. On Saturday, while still displaying his power, Rodriguez demonstrated that he can box effectively as well.

Rodriguez dropped Antonio Capulin in the opening round on his way to a one-sided eight-round decision win before an overflow crowd at the Florentine Gardens. All three judges scored the bout in favor of Rodriguez, 80-71, 80-71, and 79-72.

Rodriguez (17-0-1, 13 knockouts) entered the bout having stopped his last eight opponents. Rodriguez, who is co-trained by Eduardo and Robert Garcia, was scheduled to fight on March 14 in nearby Glendale, but had to withdraw from the fight when he came down with a case of the chicken pox.

Capulin (14-1, 6 KOs) came to fight, but his aggression worked against him in Round 1, when Rodriguez dropped him with a counter left hook to the head. Capulin was able to recover, but was hurt in the second round by another left hook to the head by Rodriguez. To make matters worse for Capulin, he suffered a bad cut over his left eye during an exchange in the second round.

The pace slowed in the middle rounds, which benefitted Capulin. The Houston-area fighter was able to do well from the outside, keeping Rodriguez at bay.

Rodriguez pressed the action more in the second half of the fight, beating Capulin to the punch during most of the exchanges. Rodriguez looked as though he would overwhelm his opponent, but Capulin hung in there, showing heart and fighting back.

Highly-touted welterweight Alex Saucedo stopped Jake Giuriceo in the fourth round in the opening bout of the ‘Solo Boxeo Tecate’ broadcast.

Giuriceo (17-4-1, 4 KOs) figured to give Saucedo a decent test considering he has fought the better opposition between the two. Saucedo (18-0, 13 KOs), one of Top Rank’s prized prospects, demonstrated throughout most of the bout that he is someone to keep an eye on.

Early in the fourth round, Saucedo landed another left hook to the top of Giuriceo’s head. The punch sent Giuriceo wobbling against the ropes and before Saucedo could follow up, referee Ray Corona stepped in and stopped the bout at 49 seconds.

– In a swing bout, Michael Norato (2-0, 1 KO) survived a first-round knockdown to win a hard-fought four-round unanimous decision over Alim Jumakhonov (1-1-1). All three judges scored the bout 38-37 in favor of Norato.

– Cruiserweight Dmitro Kucher (23-1, 17 KOs) earned a technical knockout victory after the first round when his opponent Bobby Thomas (14-4-1, 9 KOs) did not come out for the second round, citing an injury to his ribs.

– Arnold Barboza (7-0, 2 KOs) won a six-round unanimous decision over Brandon Adams (3-3, 2 KOs). All three judges scored the bout 60-54 in favor of Barboza in a bout that was more competitive than scorecards reflected.

– Junior middleweight Jessy Martinez was successful in his professional debut, stopping Omar Avelar (3-14, 2 KOs) at 1:30 of the third round.