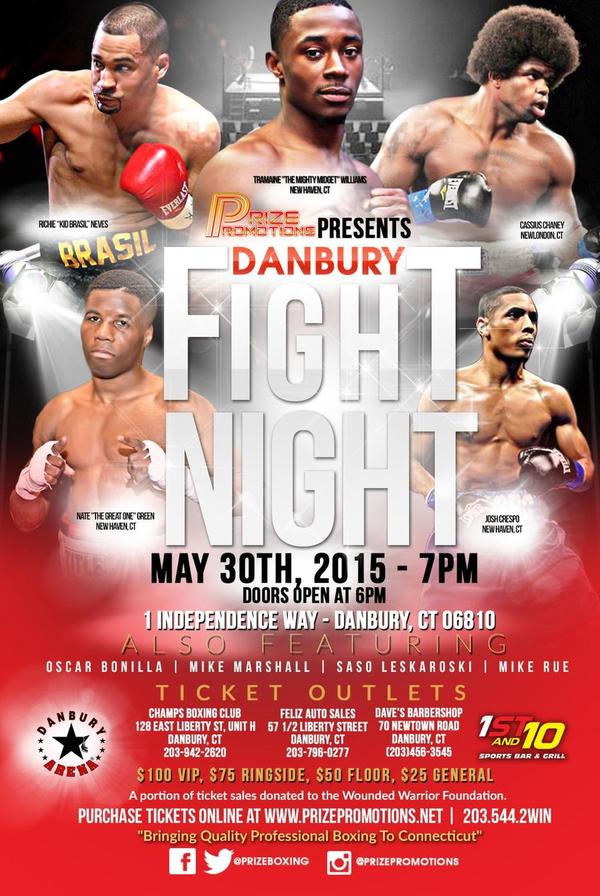 There are guys you root a little bit harder for in this business, I admit.

One of them, a guy who has always struck me as a principled grinder, AJ Galante, is kicking off a new endeavor, a boxing promotional company, and I touched base with the Connecticut resident, to hear why he’s doing this, why he wants to branch out from management to promotion.

“It’s been a goal of mine for a few years now to get into boxing promotion,” he told me. “I believe that Connecticut is an untapped market. The only time there are shows in the state is when big-time promoters come to the casinos, usually with TV, and they bring in out-of-town talent from all over, maybe stick one Connecticut guy on the show to sell some tickets, and that’s that. I think it’s unfair because there’s so much talent here. Most of my dealings in pro boxing have been as a manager and in the New York area, even though I was born and raised in Connecticut.”

“My goals as a promoter are really simple,” he continued. “One is to give these guys in Connecticut a chance to perform and showcase their talent. I have not and do not intend to sign anyone to Prize Promotions; I am simply looking to actually promote the sport with great, competitive, 50/50 match-ups. I want guys to want to fight for me because I treat people right, and they know by fighting on my show, they have the opportunity to springboard from my shows, and hopefully to something much bigger and better. I am all about opportunity. I think promoters are all thinking the same these days and fighting over the same pot of gold. I am going to be different, and bring a different mentality to my shows.”

Sounds refreshing, to me, and I think you get a sense of why I see Galante as a different sort in this sphereÔÇª

“Fighters don’t have to fear fighting for me and, if they win, having to sign a three-year contract,” he stated. “I want a guy to elevate his career as a result of being on a Prize Promotions show. I’m not about the glitzy undefeated records; I want gritty, old-school boxers who are ready to fight and give the fans a show.”

So, Galante is running a show on Saturday, May 30. What will make his shows “special?”

“What makes my event so special on May 30th is every fight is a distinct storyline. Whether it’s a return bout, a crossroad fight or a ‘something to prove’ fight, every fight on its own is special. I have unbelievable matchmakers in Hall-of-Famer Russell Peltz and Brittany Rogers out of Philly. I love how they make fights and we all share the same philosophy.”

So, are there one or two fights, or fighters, that you think will stand out?

“All these fights can truthfully be called 50/50 fights, no soft touches,” Galante said. “So for that reason, it’s hard for me to pick one or two guys I’m most excited about but, if I had to pick one, I would say obviously our main eventer, Tramaine “Mighty Midget” Williams, who is making his return after nearly two years of inactivity. All the talent in the world and, if he stays on the straight and narrow outside the ring [after having been incarcerated for possession of narcotics and an assault weapon], it’s not a matter of if he will be a world champion but when.”

Where do you see the company in five years?

“Truthfully, my goals are to be consistent,” Galante said, “and, in five years, I fully expect to be doing the same type of shows that I will be doing May 30th. I’m sure it’ll be tempting to sign guys, try to become bigger, but, again, I feel I will stay true to my vision and continue to put an emphasis on actually PROMOTING the sport with these gritty, tough match-ups that people will actually enjoy watching.”

His first professional boxing card, “Danbury Fight Night,” is taking place at the Danbury Arena, in Danbury, Conn., on Saturday night. Tramaine “Mighty Midget” Williams, at 8-0, with two knockouts, is the featured hitter. He clashes with Josh Bowles (9-1, 1 KO) out of Harrisburg, Penn. in a six-round featherweight attraction.

New Haven’s Nate “The Great One” Green takes on Timur Shailezov from Kyrgyzstan, currently residing in Philadelphia, Penn., as well.

Galante’s POV makes a ton of sense to me. I reiterate; see why I sort of root for Galante? I know; I know. I’m supposed to be purely objective but I believe that standard is fallacious, is disingenuous. If I see one guy who I believe is “doing it right” in relation to the values I hold dear, it only makes sense that I might be inclined to seek to interact with him more than another player whose methods I might find repugnant. I mean, do people think it’s totally arbitrary how much ink Manny Pacquiao gets versus positive press for Floyd Mayweather Jr.? Rhetorical question, my friends.

Go, go, Galante; follow your star and do your thing, man.