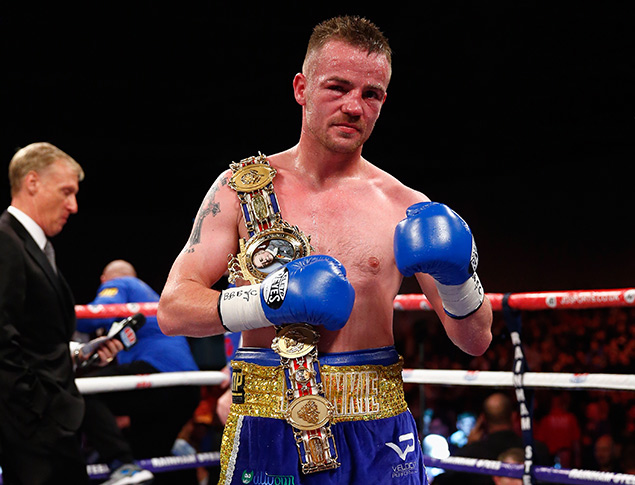 26
May
by Doug Fischer 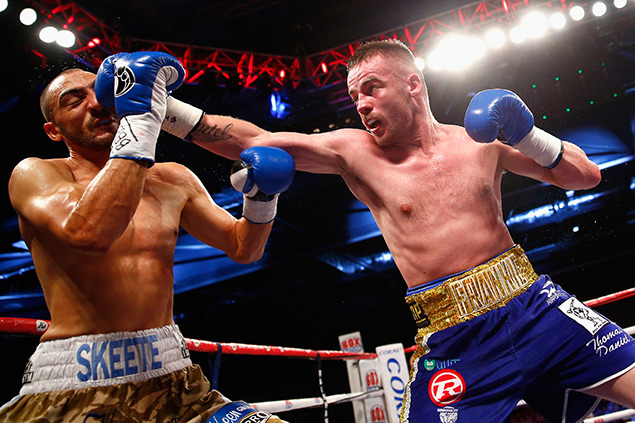 British welterweight prospect Frankie Gavin will be looking to fulfil a dream this Saturday night in London, England, and make a mockery of all those who doubted him ahead of his challenge for the IBF title held by countryman Kell Brook.

The consensus is that Brook, THE RING’s No. 1-rated welterweight, merely has to turn up and victory is assured. The Sheffield man was only selected to headline this show last month but, despite training time being limited, Gavin couldn’t sign the contract quick enough.

“The late notice didn’t hinder my preparations at all because I was already in camp,” said the challenger with confidence. “I boxed on March 28 (ten round decision win over Bogdan Mitic) and was back in the gym straight away because I was due to fight again on May 9.

“All of a sudden I heard that Kell was scheduled to fight on May 30 in London, so I called Eddie (Hearn) and asked who the opponent was. He mentioned some kid, but I asked if I could get the fight instead and he said he’d get back to me.”

Hearn, who promotes both fighters via the Matchroom banner, got back to Gavin with positive news.

In an age when unblemished records are given far too much attention, it goes without saying that perceptions can be altered dramatically following a loss. Gavin, a brilliant amateur, who sensationally captured gold at the world championships in 2007, lost his unbeaten record to Leonard Bundu on a close decision and expectations dipped quicker than he could throw his rapier left hand. The 29-year-old southpaw is now a huge betting underdog to dethrone Brook, but he insists that the timing could scarcely be better.

“I’ve been kept busy, I’m active, and this is a great time for me to be competing for a world title. I thought I won the Bundu fight, but it’s just one of those things and that result hasn’t dented my confidence in any way whatsoever.”

Not only does Gavin possess sound technical ability, he is also a side-on southpaw who uses the stance to great effect. Brook, however, is coming off a savage fourth-round stoppage of mandatory lefty Jo Jo Dan, and brings a formidable and versatile arsenal to this occasion.

“Kell has got great timing and accuracy,” acknowledged Gavin. “He’s a strong, solid, all-round fighter but there are definitely weaknesses there which I can exploit. He leans over his front foot a lot and he’s a lot easier to hit than I am.

“Kell has done well against southpaws but you have to remember who they are and who I am. Jo Jo Dan stood there, flatfooted, and Kell teed off on him all night. I’m difficult to tag cleanly and I take every advantage out of being a southpaw that I possibly can.”

Prior to winning his title from American puncher Shawn Porter, last August, Brook had boxing fans split down the middle. There were many who felt he was untested, and overhyped, but while the decision win took “The Special One” to another level, Gavin is determined to keep things in perspective.

“I am still the best technical fighter Kell Brook has ever fought and I don’t think anyone can argue with that,” he said vehemently.

“Porter is a good fighter but while I don’t take anything away from him, he can be a bit crude at times. I actually thought he beat Brook, but credit to Kell for going over there (to the U.S.) and taking the title off him. I’m glad Kell got the win and I’m thankful that he’s given me this opportunity.”

So Gavin has his dream world title shot and is primed and ready for combat. The Birmingham man’s self-belief was visceral throughout this conversation but, despite the odd pre-fight jibe, it’s clear that he respects the man he is facing. He just hopes, for Brook’s own good, that he hasn’t cut any corners.

“If Kell comes in unprepared, without a game plan, then he’ll get beat,” said Gavin.

“I’m coming to take it to him for the full twelve rounds and win whatever way I can. The fight means everything to me and it’s a life changing opportunity. There’s also a big money rematch involved and that’s another point. How confident can Brook be when there’s a rematch clause in the contract?”

Incidentally, this bout will mark the first time that two British fighters have met for a version of the welterweight title.