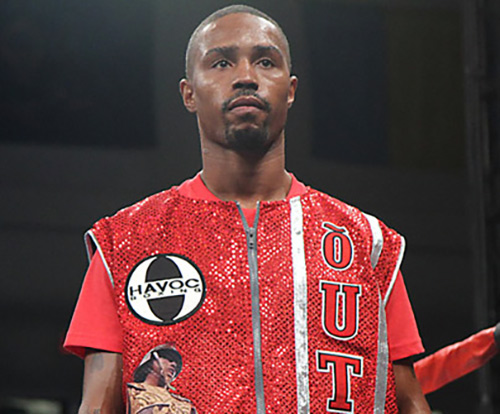 Hunter (21-3, 10 knockouts), a talented 28-year-old technician from Philadelphia, dropped Escalante with a lead left hook about a minute into their Fox Sports 1-televised main event. Escalante, who had lost three of his previous four bouts by knockout, got up on unsteady legs. Hunter immediately attacked his wobbly foe, landing hooks to the head and body and following up with a right that put Escalante (29-8, 20 KOs) down a second time.

The fight probably should have been stopped at this point. Escalante, who spent most of 2014 in jail due to repeated DUI arrests, is only 29 years old, but he’s an “old” 29 due to his many tough fights, especially his 10-round war with Mickey Roman in 2010. It’s safe to say that the native of El Paso, Texas has not been the same since the Roman fight.

Escalante has no more fight left in him and it showed as he was backed to the ropes by Hunter and brutally knocked out with a sharp, jolting right to the head. The third knockdown was enough for referee Ray Corona to stop the fight at 2:45 of the opening round. Actually, Corona waved the fight off before Escalante’s body fell to the canvas.

With the victory Hunter, a former amateur standout with good technique and all-around skills, takes another step toward living up the lofty expectations many set for him when he turned pro 10 years ago. If Hunter can stay busy this year, a shot at a major belt (perhaps against the winner of next week’s Evgeny Gradovich-Lee Selby IBF title bout, as he’s rated No. 5 by that sanctioning organization) is a realistic goal.

In the co-featured bout of the “Golden Boy Live” card, unbeaten prospect Abraham Lopez scored an impressive one-punch body shot knockout against Alfred Tetteh. Lopez (18-0-1, 13 KOs), a 27-year-old boxer-puncher from La Puente, California, landed a left hook high on the rib cage (just under Tetteh’s right arm pit) and dropped the 36-year-old Ghanaian near the end of Round 5.

Tetteh (19-4-1, 15 KOs), who had moments at the end of Round 3 and in Round 4 when both fighters fought in close quarters, was unable to recover from the body shot and the fight was waved off at 2:49 of Round 5.

In a wild, high-action six-round swing bout, Tijuana middleweight prospect Antonio Gutierrez was upset by Paul Valenzuela, who won a hard-fought majority decision by scores of 60-54, 58-56 and 57-57. Valenzuela (8-1-1, 5 KOs), of Santa Rosalia, Mexico, hurt his right hand early in the bout but never stopped throwing it or other power shots, which almost always nailed the stalking Gutierrez (18-1-1, 8 KOs), who scored well to the body in every round. The fight was a rematch of a four-round bout that Gutierrrez won in 2013.

In the opening round of the broadcast, 7-foot heavyweight Taishan Dong, of Beijing China, scored a frightening one-punch knockout against Missouri journeyman Lance Gauch in the first round of their scheduled four rounder.

Taishan (5-0, 3 KOs) crashed a massive right hand (that probably had all of his 285 pounds behind it) against the side of Gauch’s head. Gauch (5-9-2, 3 KOs) landed flat on his back in a prone, partially paralyzed manner that prompted Corona to wave the fight off without a count at 2:32 of the round. Paramedics carried Gauch out of the ring on a stretcher for precautionary measures.

On the non-televised undercard, featherweight prospect Joeet Gonzalez, of Glendora, California, improved to 10-0, with 4 KOs, with an eight-round unanimous decision over well-traveled Mexican journeyman Jose A. Beranza (36-33-2, 28 KOs).